I like hamburgers as much as the next guy, but this seems a bit gross. A “Cheeseburger in a can“.

Eww… You can buy one for €3,95. It would porobably cost three times that to ship it here for curiosity’s sake. 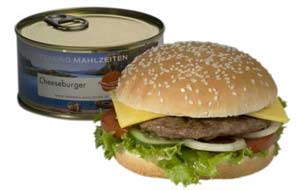 UPDATE: There’s a review of this thing online – with pictures of it to boot. Check it out. (Warning – some of the advertising links on this page could be NSFW).

Ran across a rather funny entry on a baseball blog I read daily. It’s actually about fast food joints in the United States. This article covers the author’s opinions on the majors (McDonalds, Burger King, Wendy’s, etc), and other smaller regional places like Dairy Queen, Sonic, White Castle, and Jack in the Box. It’s quite an interesting read.
I agree with him totally about Whataburger. Blech. My wife would agree with him about Jack in the Box, but the stoner reference is spot on, as their ad campaigns have a “Jack” that looks like something a stoned guy would come up with. :)
I don’t agree on Sonic though – my wife and I love that place – a little too much unfortunately.

This came out a few weeks ago, but I just noticed it, so I wanted to say something about it. AOL’s Cityguide has come out with their 2005 Best Restaurants list in various food categories.
The one I’m most familiar with is Tex-Mex, as most of the bulk on my body comes from eating that. :) The place they list as #1 is Luna De Noche, which I’ve not actually been to myself, but several people at the place I work at swear by this place. I have partaken in Blue Goose, Mi Cocina’s, Chuy’s, & Mia’s. Mia’s is really great, but if you go there, make sure and ask for the Brisket Tacos – they’re to die for. But you have to ask for them, they’re not on the menu. It’s odd, as it’s their speciality, but it’s a word of mouth thing; not on the menu. I also rather enjoy the local chain Don Pablos – I know it’s a national chain, but I’m pretty friendly with one of the waitresses, and I do like some of their dishes – they have some good “diet friendly” Tex Mex there (Mama’s Skinny Enchiladas) which isn’t something you see everywhere.
Some notes from the other categories: The winner in Breakfast was “Cafe Brazil”, which I attended once years ago, and I didn’t see it as any big deal, struck me as a very informal place, nothing that special to me. On the Brunch list is Antares, it’s a restaurant at the top of Reunion Tower (Or “The Ball” as some call it). It’s cool because it rotates. I also got engaged there.
Their winner for Burgers is quite good – place called Snuffers. Good stuff, although there’s a really awesome (non diet friendly, though) place in Garland called “Burger Island” on Northwest Highway. Check it out if you’re in Garland. Worth the trip.
I’m not going to go through all the categories, you should check it out – there’s lots of good stuff in there. As usual, some people will get bent out of shape over a place they like not being listed as high (or at all), but that’s the nature of “best” lists, eh? :)

I read today where Ben & Jerry’s is moving into the D/FW area – Plano, specifically with more to come later on, including one at Six Flags.
Oh great. Like I really need THAT in the area. I had already planned on going back on Weight Watchers tomorrow, so it’s probably not a huge deal really.
However, with Krispy Kreme about 3 miles from my house, and now a Ben & Jerrys in the relative neighbhorhood, this is a problem for those of us (isn’t that everyoen, really) fighting the food temptations in the mass media.

I like coffee. Ever since the one year I spent in College, I kind of got hooked on the stuff. I was going to Temple University, and when I would get off the Subway in North Philly, I’d get what I called “A Cup of Mud” from this Roach Coach that was right outside the Cecil B. Moore stop (then it used to be called Columbia). I’d drink that on my way over to wherever I was going, and that was my tradition. When I started working in auto parts warehouses, coffee was a major staple there. Then I worked at a microfilm company in the philadelphia area and since I worked a lot of odd hours, coffee was there, too. So it’s kind of with me – although where I work now it’s probably not as big of a deal, except I need it more to get me going in the morning (which is odd because I drink decaf due to my acid reflux – it’s gotta be a total head thing, as there’s no caffiene to get me moving in decaf).
Thing is, I only like what most people would consider “bad office coffee”. Not that the coffee is actually BAD, but it’s not like a . And that’s my entire point here. I simply cannot stand Starbucks coffee. It’s just too damn bitter – you have to put almost the entire sugar can in there to make it drinkable, and by that time it’s too damn sweet. I really do not understand the success of Starbucks, as they charge insane amounts of money for a cup of coffee. I mean really – why do we need to pay in the neighbhorhood of three f’in dollars for a cup of coffee? I know why – it’s got the Starbucks logo on the side. Don’t tell me it’s the “preparation” – how much prep does it take to make a pot of coffee and pour it in a cup? If Starbucks ever offered self serve coffee at half the price (or more), I might drop that rant – but I certainly wouldn’t enjoy the coffee. My wife loves their Coffee Frappucinos, or as I call them “Coffee Slurpees”. Same category – 7-11 should make a coffee slurpee and their price would be 1/3 of Starbucks, and not only that, would be 4 or 5 times the size of the thing! Damn Starbucks. The only good Starbuck is on Battlestar Galactica. I really think it is Dr. Evil running Starbucks sometimes – it would explain their hold on the states.
Anyway, I started this entry because I was drinking a cup of coffee at my desk in the morning, and I enjoyed it. I know most people don’t like my preference of coffee, but dammit – I like it. The other bonus is coffee (w/o all the cream & sugar) as a total zero on Weight Watchers. :)

For anyone living in the Mesquite/Garland TX area…
The Chipotle on Town East Boulevard is opening up next Monday the 23rd. That’s great and bad. I love the place, but on Weight Watchers eating one of their burritos is roughy 85% of my entire food intake for the day! It’s also about 3 blocks from my Weight Watchers class, too. There’s got to be some joke about Chipotle being a few blocks from Weight Watchers, but I’m too tired to find it. :)

Good news and bad news. One of my favorite restaurants is Chipotle. They have burritos to die for. Unfortunately, they’re not the greatest things for you. I’m on Weight Watchers and the points that the Chipotle Burrito takes up is about 75% of my entire food intake for the day. :eek: Still, it can be budgeted for, and they’re oh so great!
The bad thing about it is that they’re putting one in Mesquite, TX across from Town East Mall (in the old dead Colter’s BBQ spot). Putting one of them close to me is bad news. It will, on the the other hand, save a trip out to Plano (or in town to Dallas). The Mesquite location will be much closer.