Lynn on the Rangers

Had something really cool happen on Tuesday night. My wife got picked to be on the home run contest on TV for the Texas Rangers game. During Ranger games, they pick someone from a group of people who entered, and that person is the “Sonic Slam Contestant”. If a Ranger player hits a HR in the 6th inning, that person wins the pot, which goes up $100 for each game since the last winner. Plus they get two Ranger tickets, and two vouchers for Sonic food.
Well, they called Lynn. It was very cool. She was actually lying down taking a nap when this came on. I paused the TiVo, and went and woke her up, and said “This is absolutely worth getting out of bed for”. Showed her, and we both got excited. However, the Rangers didn’t deliver. In fact, the lone baserunner that inning got picked off – D’oh!
Still, it was cool to see her name on the screen, although a couple of friends of mine (including another blogger) gave me crap about her having been on a Ranger broadcast before I. :) 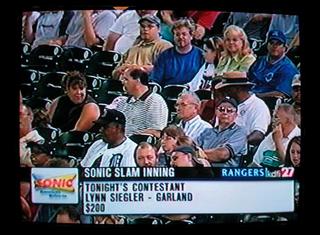