When I sat down at the computer this evening to start reading about my Eagles getting to the Super Bowl, I saw the headline that Johnny Carson had died. That kind of bummed me out.
I’ll be 40 in August, and when Carson had retired, I was 27, I had been watching him for awhile at that point (probably about 10-12 or so, I really don’t remember for sure now). Carson was supposed to be for my parent’s generation. Wasn’t supposed to be somebody that a youngster like myself was into. But I thought he was hysterical. He’s one of the few late night folks who I liked to watch the interviews with. Never much liked Dave Letterman and his interviews, Jay Leno I’m “eh” with (on interviews only, I love Leno otherwise). But Carson seemed to have the interview side of things down too. Plus his shtick worked for me. Don’t know any other way to say it. He made me laugh.
But I liked most about Carson was that he left when he was still wildly popular (much to my chagrin), and when he quit, he QUIT. He stayed out of the public eye. He retired and went away. He kept to himself, unlike most celebrities. Good for him. He deserved it.
I think one of the few times he came out of retirement was to voice himself on an Episode of the Simpsons in 1993. 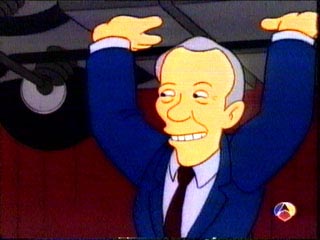