Long ago in a galaxy far far away, I was an Apple user. What I consider to be a “real” Apple user. I owned an Apple ][+, then an Apple //e, and finally a IIgs. To me, when Apple invented the Mac, the soul of the company died.
However, since the return of Steve Jobs a few years ago (was he ever offiically bought back as full time CEO? I know he was interim for a long time), the company seems to have revived some of it’s coolness. When they came out with the cool purple (and other color) iMacs, I considered buying one for home. At home, I don’t play very many games (I play games at home on my Xbox & Gamecube), all I really do are sort mp3’s, write the occasional letter, balance my checkbook, and do email/web browsing. All of that can be done from a Mac. But I never bought one. I kind of let the idea drop.
Until I saw the Mac Mini this week which was announced at Apple’s annual MacFest. It looks really REALLY cool. It’s basically an entry level Macintosh. It’s got some really great style, which has been the hallmark of recent Apple products. Quite frankly, if I didn’t have a kid on the way, I’d seriously consider it. The only thing that concerns me is the small amount of hard drive space in the thing. If I read the press releases right, it’s only 40Gb. Feh, I have a 160Gb HD for all my digital media, I’d have to immediately upgrade the hard drive in there, assuming it’s possible. The size of the thing seems to preclude the fact that you can do much in the way of expansion. I seriously doubt you can do more than two hard drives in there. The Mac Mini doesn’t come with a keyboard, mouse, or monitor, but I already have all that stuff. I have to say, I really like the idea of this.
But, I can’t really afford it with my first kid on the way in about 3 months. But I can dream about it. I’ll probably go out to the Apple store in Plano Texas and sigh over it.
Anyone want to be nice and buy me one? 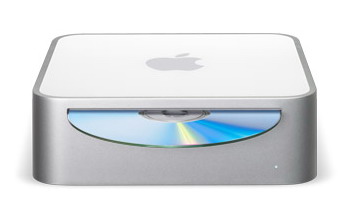