Back to the Vortex Book Review

Back to the Vortex
by J Shaun Lyon 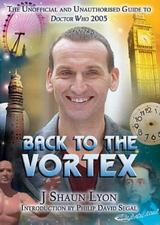 Anyone who knows me knows that I’m a big Dr Who fan. Of all the TV I’ve watched over my lifetime, I daresay Doctor Who is probably my favorite show of all time. Without boring you with the entire history here, the TV show went off the air in 1989 (after running for 26 years). There was an attempt to revive it in 1996, but it didn’t get off the ground past a pilot movie. It finally returned to the TV in the spring of 2005. I was cautious, as I didn’t know how the show would play out now, 16 years after it ceased being on the air. But I shouldn’t have been worried, it was a tremendous success – was renewed for two more years after the one in 2005. The show was fabulous, and not just because there was new stuff. My wife, who abhors the show watched a few, and genuinely liked them.

The new series is where this book comes in. “Back to the Vortex” was written by an old friend of mine Jim Lyon (who now goes by the name Shaun Lyon). It’s a superbly detailed behind the scenes story of the making of the new series from how it came about to the press on it’s return, to the actual physical shooting, plus a lot more. It’s got a level of detail that might overwhelm some readers. One part that almost bored me was the bits about shooting. As I don’t live in Cardiff Wales, the acutal locations mean little to me. Several sections of the production areas of the book were “OK, filiming was done here, and they shot until the darnkess..” After several such lines like that, they all seemed to blur together. it’s my only fault with the book.

After the book gets to the point of the show being on the air, it switches to programme guide mode, where each episode is broken down into several parts, it’s an extremely detailed guide, offering both a factual, and opinionated look at the story in question. There’s also an appendix discussing ratings, and other information.

If you like Doctor Who, and have been lucky enough to see the series (as of Dec 2005, it has yet to air anywhere in the US, nor are there any current plans to do so (on TV anyway, it comes out on DVD in Feb 06)), then you should check the book. Some of it reads like a reference guide, but I guess that’s what the book is.
Also make sure and visit Lyon’s Outpost Gallifrey website, it’s by far the best Doctor Who site on the net.