The Original Star Trek to get an Upgrade Pt 2

A few days back I reported (not really reported, just posted other’s news) on an update to the original Star Trek’s special effects. Since then, several things have been posted which are updates to the original story. Here’s a summary of some further developments:

My personal preference would be for these episodes to be in 90 minute time slots with MORE commercials so we could get the ful 51 minute episode, but they’re being shoehorned into 60 minute slots, which means about 8-9 minutes per episode is being excised. Not thrilled with that, but at least we’ll get to see ’em.
Also, it’s mostly going to be on SD channels, as apparently, most channels that show HD material can handle live HD, but not recorded HD (something about capacity of stations). This is replacing Star Trek Enterprise in syndication, as ENT is going to HDNet and Sci-Fi this fall. So if your TV station has been showing Enterprise reruns, you’ll get the new Star Trek. In the Dallas area here, it has shown up on my TiVo, so I’ve already gotten a season pass for it.
Here’s a couple of significantly larger versions of the new CGI NCC-1701 ship: 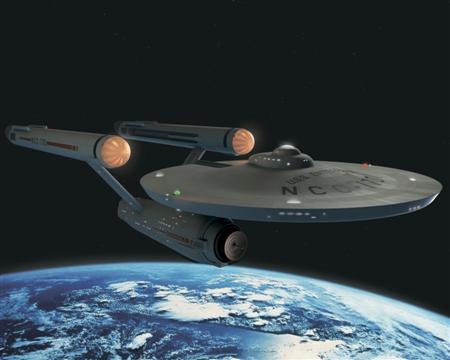 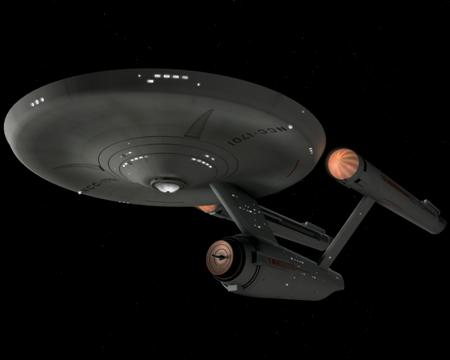 Finally, there’s this story from the DVD site The Digital Bits on all of this:
Well… we’ve got some more information for you today on CBS/Paramount’s effort to upgrade Star Trek: The Original Series in high-definition with new digital effects. This comes from a phone Q&A session with producers John Nogawski, Dave Rossi, and Michael Okuda, held earlier this morning:

The effort to update The Original Series is a completely independent effort from Paramount’s theatrical side of the franchise. This is not related to the J.J. Abrams feature.
The purpose of this effort is NOT to change the story and plot. They’re working rather “to enhance the experience of watching Star Trek.” The intent is very much to honor the original.
The work is painstaking… they’re trying to be very faithful to the original effects, right down to the placement of stars. Says Mike Okuda: “Star Trek is a period piece… all the decisions are being made so as to honor and recreate the look and feel of the original style, direction and cinematography.”They’re confining themselves to the original edit length of the shots, and the dynamics of motion and position within the shots will be the same (so don’t look for the Enterprise to do any barrel-rolls, etc).
There are certain occasions where they are going to do things to correct errors, but they’re not going into the live-action footage much. Mostly they’re sticking to exterior ship shots and viewscreen shots, and some atmospheric effects are being added to matte paintings of planet exteriors. The aliens will stay the same (no revised Klingon foreheads, etc)!
In addressing the ways in which the series’ classic opening has been changed, it was noted that the re-modeled CG Enterprise was created from measurements taken from the original filming model hanging in the Smithsonian. All the star patterns are being exactly duplicated. The Enterprise motion is simply being smoothed out. The music is being re-scored, but otherwise most of the changes are very subtle.
Mike Okuda was initially a little reluctant when he first heard that this was bring done, but when he learned the spirit of the effort, his opinion changed. The producers involved in the effort are not concerned about a backlash, because they’re “taking every effort to do it appropriately.” For example, they’ve spent hours discussing whether or not to do certain changes, so they’re being very careful.
All 79 episodes are being done, plus the pilot. 35-40 episodes will be done for weekly broadcast syndication airing this year, and another 35-40 for next year. The entire length of the episode is being done, not just the 43-minute syndication length (broadcast stations choose how much they wish to show of the episode). There are somewhere between 15-70 effects shots per episode, and the total length of enhanced footage per episode could be as little as a minute and a half (depending on the episode).
Masters are apparently being created in both 4×3 and 16×9. [Editor’s Note: We’re working to determine EXACTLY what this means, and how the specific footage is being handled.] Eventually, the producers expect that there will be a DVD release of the new versions [and presumably high-definition HD-DVD and Blu-ray Disc versions as well], but not right away, as it’s going to take at least a year to get all the work on all the episodes done.
The original versions of the episodes will continue to be available on TV Land and G4, and the previously-released DVDs will continue to be available. The new versions will be seen only in broadcast syndication for at least the next year or so, and will air as they’re completed. The new versions can’t be shown on cable until all the episodes are done, as cable syndication deals are made in “strip” packages (meaning entire runs of episodes – complete seasons or entire series). The original film masters of all the episodes will be preserved.
The episodes will be seen on more than 200 stations around the country, starting on September 19th. In terms of which specific stations will be showing the new versions, The Original Series is apparently replacing Enterprise in syndication. So if your local station has been showing Enterprise in recent months, that station will now be showing the new enhanced Original Series episodes. Enterprise is being moved to strip syndication on Sci-Fi Channel and HDNet. Star Trek.com will be posting a list of every market in the country where you can see the new episodes soon. Promotion/advertising for the newly-enhanced Star Trek is expected to begin this week.
Not all of the broadcast stations will be able to transmit the episodes in full HD. Regardless, they’ll be shown in the original 4×3 aspect ratio (presumably with black bars on the sides for digital broadcasts). It’s up to the affiliates as to whether they’ll show the episodes in true HD. Apparently, many stations don’t have the harddisc capacity to store pre-recorded syndicated episodes in full high-def (broadcast stations that do HD mostly just do it live, or simply re-transmit network HD broadcasts). The hope is that will change over time, as stations upgrade their equipment.
The first few episodes to be shown will include Balance of Terror, Journey to Babel, Mirror, Mirror and The Menagerie, Parts 1 & 2. FYI, Doomsday Machine is scheduled for the “second” broadcast season next year (as we said, there are going to be two 35-40 episode seasons).
The preliminary decision to enhance The Original Series was made in January. The final decision was made in March, and planning began shortly thereafter. The actual production work began much more recently. FYI, there are no plans at this point to do anything similar with the other Trek series.
And that’s about it for now. We’re hoping to ask some more specific follow-up questions – particularly questions related to the eventual DVD, HD-DVD and Blu-ray Disc release plans (and the way the aspect ratio is being handled in the production) – in the near future. We’ll be sure to keep you up to date.