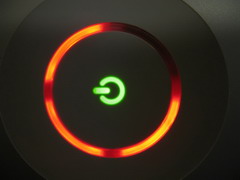 As the two or three of you who regularly read this blog might remember, back in February of 2007, I had a problem where my original Xbox 360 died. My original Xbox 360 was bought on January 1, 2006, and lasted until February 3, 2007. At that time, I had been just out of warranty, so when it died, I was going to have to pay $129 (plus tax and shipping) to repair the thing. I’ve been through this story already, if you read the link above, you can check out my original nightmare.

So, OK – fast forward to today. It’s March 8, 2008. My second Xbox 360 has been going fine, although I’ve noticed as of the last week or so that when I turn it off, it was making an odd grinding sound. Nothing that really caused panic, but it was a sound that wasn’t there before. So today I’m playing some MLB 2k8. Having fun, and then the wife and daughter went out for awhile. I got on the net for a bit, and came back to play some more. And guess what I saw? Well, given the blog entry’s title, it can’t be too hard to guess. In fact, I took a picture of it. It’s shown to the right. This isn’t a red ring picture glommed off the net, I just took this myself.

I have all the major consoles from “this generation”. I have an Xbox 360, a Nintendo Wii, and a Sony Playstation 3. Of the three, I’ve had the 360 the longest (although not obviously the same actual unit). It’s got the most polished interface, the biggest library, and a host of other things Microsoft will tell you about their console. It also has a horrendously godawful hardware failure rate due to what a lot of folks are suspecting is an overall design failure. For the longest time we didn’t hear much about it, but not too long ago, there was a story saying that the overall failure rate for the console is 16.5%! Good Lord, that’s insane. Most hardware failure rates are a couple of percent. You kind of expect that. It’s inevitable. Things break. I get it. But 16/17 percent of all units? No wonder Microsoft had to extend the warranty. 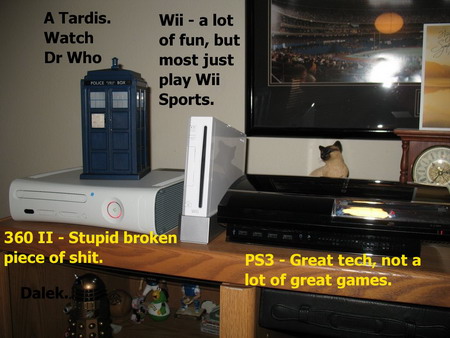 That’s the rub with me and my original Xbox 360 unit. That one was manufactured at some point pre-launch of the console in the fall of 2005. I forget the manufacture date of my original unit. This second unit was manufactured in August of 2006. That was right around the time that Microsoft started coming up with some ways to properly combat the problems the units were having, but I didn’t get an upgraded unit for the second one. It was one from the original hardware design, before they started upgrading things to deal with the original design problems. In July of 2007, they extended the warranty for all units to three years with the red rings problem, and refunded repair money to those who had paid it. My first one died in the window between the original one year warranty, and when they extended it to three years. So I could have gotten away with it, but I was so mad at the time.. oh well.

Anyway, this new unit has died now too. At first I tried all the junk they have you try when they die (which I’ve read about enough, and went through once before with my first unit). Unplug the box AND the power supply from the wall. Let them power cycle (the light on the power brick goes out). Plug back in. It actually worked again. However, I knew it was likely temporary, so I turned off the box, and tried again. Three red rings. It’s a gonner.

So I first tried the repair stuff on xbox.com – and got an error about my box being not registered, and then when I tried, I got another error on their website. Great. I was really hoping to avoid talking to someone on the line again, as it’s generally guys who sound like English is their third language. So it was with some trepidation that I called 1-800-MYXBOX. I got another guy who sounded like I was talking with someone in India again. But this guy wasn’t uber hyper, and was talking in a register I could understand. Without going through all of our phone call, I got a repair order put in.

Technically my box is out of warranty, but the three year repair thing covers this, so I don’t have to pay anything. As has been documented elsewhere what happens now is that you get an empty box from Microsoft with UPS postage paid on it. You put your 360 console in there, and ship it off. A few weeks after that, you get it back repaired. I’ve read online that in a lot of cases it’s not the same unit. I am hoping that due to the manufacture age of this unit, they don’t just repair it, they replace it with one of the newer ones. The newer ones have quieter DVD drives, additional heat sinks, chips that use less power, and generate less heat. That kind of stuff. Hopefully that’s what I get.

So now I wait – the empty box should arrive around Wed or Thursday this week or so they said. I now have to wait about three weeks or so to get an Xbox 360 back. I guess this means more time with my Nintendo Wii and my Playstation 3. Despite all the tech problems the 360 has (one of which is the extremely LOUD DVD drive the thing has – the Wii & PS3 are whisper quiet), I enjoy it more than the Wii & the PS3. That’s not to say I don’t enjoy games on the others – or I wouldn’t have them. But the overall experience I think is the best on the 360. When it works.

When my wife suggested that I just buy a new one after my first failure, she did say that if the second one died, that she’d probably put her foot down and say I wasn’t going to buy another one. This all has happened while she’s out of the house with our daughter at one of my daughter’s friends’ birthday parties. I can’t wait to see the rolling of the eyes (rightfully so) when she returns. :) At least this repair is free. What they tell you is that the repair work is not covered by the rest of the three year warranty, although if this happens a third time, I might be too mad to want another one.

The real tease of all this is that I have a development kit Xbox 360 on my desk at work. Those are nice, but the development kit boxes don’t play retail games. Only development stuff. Darnit, otherwise I’d use that to play my games on. Sigh.

So in closing, I have this to say about my second Red ring of Death Xbox 360… 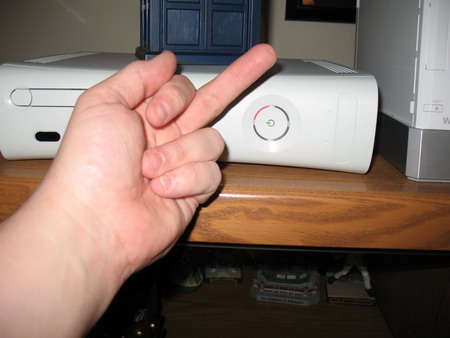 UPDATE Mar 19: My coffin arrived late Wed afternoon at work for me to send my dead 360 back in. What’s amusing is the address on the label they sent me is about a 10, maybe 15 minute drive from work. I wonder if they’ll let me just drop it off. Probably not, but it sucks it’s so close and I have to send it through UPS.

UPDATE Mar 28: Well, my replacement 360 just showed up at 3DR via UPS. It still bugs me that the repair facility was 8.2 miles from 3DR HQ, and I couldn’t take it there myself. Still, from the time out the door to back in my hands was 7 days, that’s really not that bad, all things considering.

Anyway, the first thing I did was open it up to see if I got my same unit back. I DID NOT want my old unit back, as it’s manufacture date was 2006-08-23. This was the original hardware footprint of the Xbox 360, and I certainly didn’t want that back, as both my first and second units were from that “batch”, and both crapped out. My original 360 had a pre-launch manufacture date from some time in the fall of 2005.

So I open the box, and there’s a letter on the top that starts with the text “So that you can get back to playing and enjoying your Xbox quicker, we have replaced your Xbox console with a replacement unit”.

It’s less than three weeks old as I get it in my hands. This probably means it’s one of the newer 65ns units (hopefully). These are supposed to have quieter DVD drives, too.

The problem is, I don’t know how to tell. I found a post online a few weeks back telling you how to tell if you’re in a retail store, and can see the box labels. But this is a repair job, so I don’t have the nice fancy retail box.

Whatever, I’m glad to have my 360 back. Hopefully I don’t have any future problems going forward.

Edit: Future me scoffs at this optimism of younger me.