I like candles.  Always have.  I have bought them for ages, burned a virtual infinite number of them.  Used to burn them at work too, until some moron I worked with left his burning after he left for the night, so nobody was allowed to burn candles at work.  Grr.. Heck, during my unemployment period, I applied to work at the Yankee Candle store in Garland not too far from me.  You want a good gift idea for me?  Gift certificate to Yankee Candle Store!  :)

Seriously though, I’ve never been a big person to get all handy and save money by doing “Martha Stewart” types of things.  I’m generally a “it’s done?  Throw it out, get another one” kind of person.  But for some reason, what about I’m about to post about has glommed on in a big way with me.  If you like candles, and burn a lot of them, then this will probably be of interest to you.  It will extend the life of your candle purchases, and will save you some bucks if you also tend to buy car fresheners. 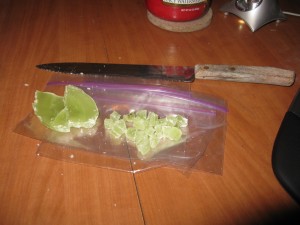 Anyway, I was in there a few months back, and got kind of chatty with the woman working there.  There wasn’t much going on, so we chatted about any number of things, but mostly the company and their products.  It was this woman who gave me this great idea I’m passing on.  She pointed out that every candle gets to a point where the wick will just not burn anymore.  They burn out.  By this point, the candle wax is all the way at the bottom of the jar, and most people when the wick gets to this stage just toss the candle in the trash.   What the woman told me to do is this:

Take the candle wax, and get it out of the bottom of the jar.  Cut it into small pieces with a knife, and put the pieces into a Ziplock bag or something similar.  Take the bag, and put it under the seat of your car, but with the lid open.  This will make your car smell like the candle smell.  The woman (correctly) pointed out that just because the wick stopped burning doesn’t mean the candle wax loses its scent.  So I decided to try this once with one of my favorite candle scents (YC’s “Tulips”).  What did I find?   This worked pretty darned well!

So I did this, and I have to say I’m a big proponent of this idea now.  In fact, as I type this blog post, I was in the middle of cutting up the wax from two more candles that have burnt out at our house.   I’ll include a few pictures below.   A few caveats about all this:

Once you’re done with all this, you can then take the jar the candle was in, and toss it in the recycling bin.  Look at me, I’m being all green!  :)

I really liked this idea, thought I’d share it with others who might find some use out of it!