While this won’t affect the majority of users here, some probably will want to know about this.  Available now is a new v1.1 (technically 1.1.0.40) update to the iCloud Control panel for the PC.  It’s odd that it calls itself a “Control Panel” as such, given that it’s function turns your PC into an iCloud enabled device, such as an iMac, or an iOS device as such.

There is no changelog with this new v1.1 version, nor are there any visible changes once you run the program, other than the version number in the upper right hand corner.  Cosmetically it seems exactly the same as the previous version.   It has most likely been updated due to the fact that iOS v5.1 was just released.  If you are using the original v1.0 iCloud Control Panel, it’s probably best that you update anyway, even in the face of an unknown changelog, if for no other reason than to be updated with possible bug fixes and whatnot, or just to keep up with iOS 5.1. 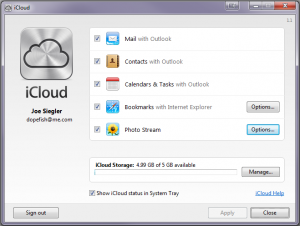