Humanity is a Cesspool – Most of the Time

The Colorado Batman feelings have set me off today, as you will shortly see.

This has some actual opinions, and the odd strong language. If that bothers you, then tough. I need to say this. There’s just so much in this world that pisses me off. It’s amazing that I can even contain my rage at times. I get sick at times of repressing my feelings in the name of comfort or harmony. Whether or not I have an opinion on gay marriage, abortion, athiests, “Democrats & Republicans”, Christian Hippocracy, murder in God’s name, or more “current media things” like Chick-Fil-A taking a stand on gay marriage/homosexuality and Oreo’s support of gay pride. We’re not supposed to say things like this because it makes people mad, we’re not tolerant, etc, etc, etc. So we hide our feelings to keep our friends – and “be comfortable”. Or the worst of them all – that simply because we disagree with something, we’re “judging” it, and everyone gets out their pitchforks and storms your castle. Get it through your heads. Just because someone disagrees with something, doesn’t mean they’re JUDGING IT. 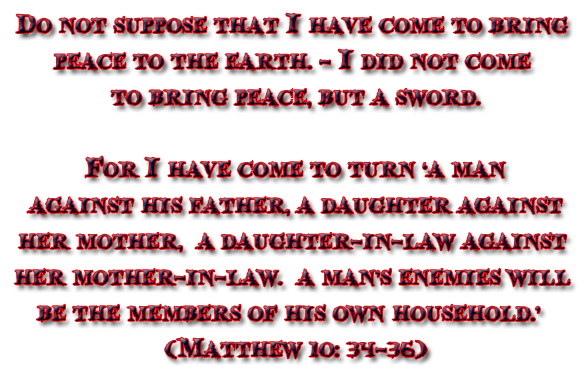 The news from Colorado this morning is one of those things that tend to make me speechless at times. College shootings, the Fort Hood massacre, the video from Philly from the other day of a guy getting out of a car and trying to abduct a 10 year old girl off the street in broad daylight, race hatred, flying planes into the side of buildings, f blowing up Federal buildings in Oklahoma City, bombing city subways, Mexican drug cartels, the list just goes on and on. The amount of sin and atrocities in this world is outstanding. That people will go into movie theaters and kill other people speaks to what, exactly? It happens so much, that you can’t pass it off anymore as an individual nutjob. I don’t think it’s an “organized terror wave” like I’ve seen theorized. It’s just the degeneration of the human spirit due to the caustic attempts at self gratification that we’re just oh so good at. We forget about others, centralize on ourselves, and then worse – things like the Batman Movie Theatre shootings happen.

And that’s just stuff in the United States. Things are a lot worse in other parts of the world. Let’s start with things like the forced mutilation of young girls in places like Afghanistan by forcibly having their clitorises removed. Look up what sometimes happens to pregnant Christian women in places like Nigeria sometimes; it’ll chill your bones, not to mention a ton of other atrocities comitted against Christians by Muslims in the name of “God/Allah”. Just google for Muslim attacks on Christians. Whether you believe in either religion, or neither/none, it certainly is awful behaviour. Slitting a two year old’s throat while offering praises to one’s God. Show me the good in that. You can’t. There’s so much good that be done in this world yet we spend so much of our time trying to piss each other off or kill each other. Another example of that is a recent Muslim bombing again in Nigeria of a church, and then the next day when they were having a funeral for those who were dead someone bombed the funeral! It’s this kind of stuff that made me SO against having children. I never wanted them when I was younger. I looked around at the world, and thought, “What right do I have to bring another child into a cesspool such as this? The sex that would generate that kid is a momentary bit of fun yes, but from that comes a whole life and a world of hell, because that’s what this world is. Hell. It’s all down to the pointless fucking quest for personal glory and power, and be damned anything else. I want to be it – the king of the heap – I WANT TO BE GOD.

I have someone who is a personal friend in Nigeria, and I know a few more besides him. Anyway, this man has done a lot for us, and I pray that he’s kept from harm over there, because attacks on Christians in Nigeria are frequent and horrid. That he continues to try and spread the word of Jesus is a great glory in the face of such overwhelming hatred and oppression.

AND THEN THERE IS UNITED STATES POLITICS and its perfection of the art of wastefulness and desire (and subsequent gluttony) for power. So much money and so much wasted effort trying to kill each other politically. It’s gotten exponentially worse in the last few years with this bloody tea party bullshit. It’s not like they hold exclusive title to that. Both sides are just equally as guilty of wasting money and not honoring God’s command to build each other up and not tear each other down. Look at how much money is being wasted in the name of personal glory to tear down the other politician on the other side of the aisle. That’s the kind of self-centered nonsense that keeps our eyes off of what’s actually important. If all that money gets wasted on politics and elections could be used for something constructive like solving aids or beating cancer or heaven knows autism that would help my son or my brother-in-law. It just pisses me off all these politicians that waste so much money. That they do so much bad for the world with so much money and yet a lot of people I know who do good for people in the world have virtually nothing (like a woman I know named Rhonda – if anyone deserves a bailout, it’s her, not the pigs on Wall Street). I cannot see the “Occupy Wall Street” stuff making a bit of difference. These are people who still believe that their actions can make a difference. They’re fooling themselves, they cannot. When I was younger, my first Presidential election was Ronald Reagan’s second election. I was caught up in the politics of it. I used to have delusions back then that politics could make a difference. Politics are the fucking problem. What a dumbass I was. You can’t fix things with politics. You can help things with politics a little, but more often than not, they just get in the way and cause the problem. I know this kind of anger and language isn’t exactly the best way to go about things, but I just get so mad and you feel so useless that you can’t do shit about it, that it comes out in ways like this.

Not to mention people like Rush Limbaugh who just irritate the hell out of me. What a sanctimonious blowhard this guy is. From calling women sluts on his radio show or more recently claiming that the new Batman movie is an attack on Mitt Romney solely because of the name of the main villain is Bane (Romney; Bain Capital -Get it?). I am at a total loss to understand how he could conceivably think that is a legitimate and valid point of view. This guy to me is a prime example of what’s wrong with politics. He just exists to tear things down. nothing at all constructive that comes out of seat of power he unfortunately wields to a rather enormous number of sheep.

Some other Rush Limbaugh fun:

Anyway, I know when we live on this earth in the domain of Satan and we’re bound to deal with things like that. I understand it insofar as that’s the reason why these things happen. But I don’t have to like it.

As Roger Waters said 30+ years ago all in all you’re all just bricks in the wall. 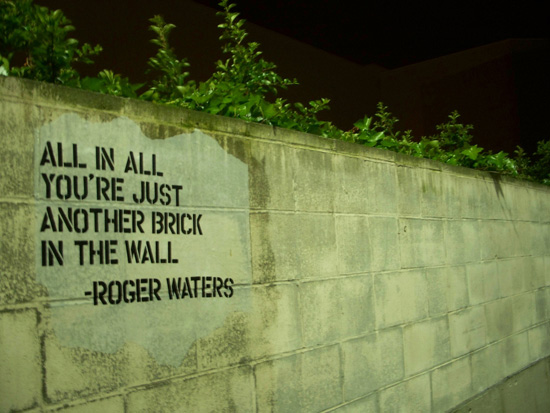 Still occasionally something happens that makes me think that the world is not a complete cesspool of self interest and bullshit. I’m speaking of my daughter yesterday. She has a friend at church, her name is Grace and Grace is been a very good friend to Samantha. Both of them will wait in the lobby looking for the other on Sunday morning if they’re not there on time. They even write “BFF notes” back and forth to each other. Yesterday, Samantha on her own accord decided that she was going to give Grace a present. What Samantha is going to give her is one of her personal American girl dolls. Samantha has several of them – I’ve honestly lost count of how many she has. It’s probably about six or something like that. Grace doesn’t have any (not just American girl, but she has no dolls at all) and Samantha out of the goodness of her own heart decided she wanted to give her one. After making sure this was okay with Grace’s family that we give that kind of gift, Lynn and I were all behind it. That’s because her heart is in the right place – the words that came out of her mouth when she talked about it were so loving and giving and there is no way I could attempt to squelch Samantha’s goodness. Even in our situation when when we’re hurting for money and whatnot that Samantha wants to give readily from her own stuff of her own free will to somebody who doesn’t have something is just stunning to me.

If the world had more people like Samantha who wanted to give from their heart for the right reasons as opposed to people like the super PAC assholes who fund millions and millions of dollars just for the purpose of tearing somebody down, this world will be all whole lot better off.

To bring up Roger Waters again, perhaps “the tide is turning” when I think of my daughter. You really love to think that. I really DESPERATELY would, but somehow I don’t truly believe it.   It will take being covered in the blood of the son of our creator for that.  Everything else here is just pissing about.

God bless the families of those who lost their loved ones in a Colorado movie theater late last night.

“Every gun that is made, every warship launched, every rocket fired signifies, in the final sense, a theft from those who hunger and are not fed, those who are cold and are not clothed.”. –Dwight D. Eisenhower 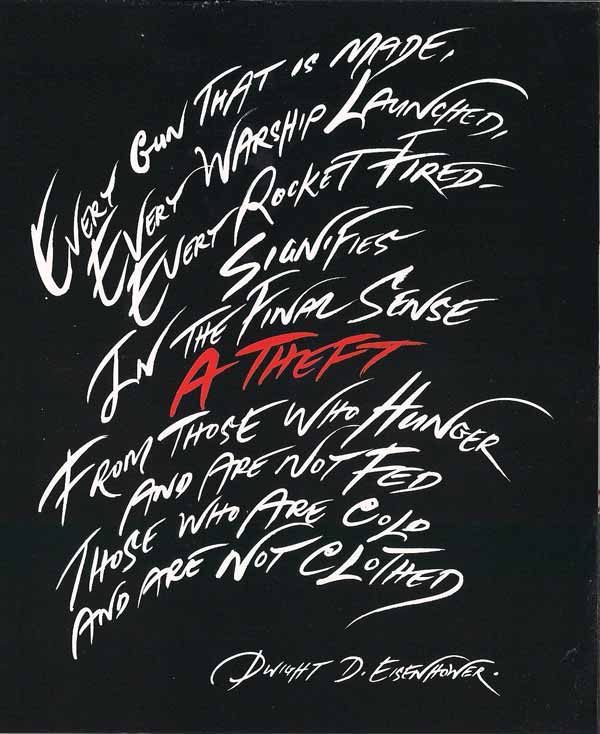