I just got done watching the documentary from Microsoft called “Game Over”, which is the story of the Atari 2600 and the E.T. cartridge being buried in a landfill in New Mexico.  Wanted to write about it a bit, because several parts were pretty powerful for me.

As someone who was into the Atari 2600 at the height of its craze in the late 70’s and early 80’s, this documentary was of huge interest to me as I wanted to get some insight into Howard Scott Warshaw – the guy who wrote the game – under some stupidly impossible conditions.  He was practically set up to fail, in my opinion (a feeling I’ve felt since I first learned about this a couple of decades ago) – he was basically given five weeks to make a good game where it normally takes five or six MONTHS to do so.    I had played Howard’s 2600 games to that point, that being “Yar’s Revenge”, and the “Raiders of the Lost Ark” games.  I loved both of them.   But in the era of popular culture BEFORE the Internet, you couldn’t tell what something was like before it came out, so I like most everyone else got E.T (with a lot of people returning them).  It wasn’t a terribly good game, but definitely NOT the worst videogame ever, there’s a whole lot others that can honestly lay claim to that title.  In fact, I’d lay a larger claim of the overall demise of Atari back then on the Pac-Man cartridge over E.T.   E.T. had problems, yes, but I thought Pac-Man did far worse damage to the company. 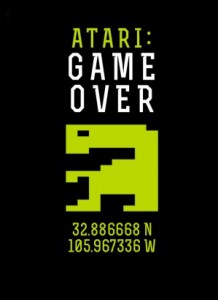 As someone who lived through the game crash of the 80’s, and someone who worked in the videogame industry for around 20 years, most of these stories I had heard myself somewhere along the line before.  My professional travels brought me in contact with several old 2600 devs, and that was cool to me.   However, hearing Howard talk in this documentary about himself, the E.T. work, and specifically the culture at Atari was gold to me.

Specifically one scene where Howard talks about his last day of Atari, and how he felt leaving there.  I’m referring to the bit where he talks about “having all his stuff in a trash bag going to the car for the last time and how he thinks he was leaving the coolest job ever, something he didn’t think he could ever professionally recreate again..”  Yeah, I GET THAT.   To those who know me, watch this, and what Howard said about himself was EXACTLY what was going through my mind in May of 2009 when my version of 3D Realms shut down.   My leaving on the last day – and I was last out the door that day too, matched pretty much word for word what Howard echoed about leaving Atari back in the mid 80’s.  Pay attention to that.  His mind was my mind in regards to some very raw feelings at the time towards our former companies.   One could draw a parallel of sorts between the Atari 2600 E.T. cartridge and Duke Nukem Forever, but that’s not why I’m writing today – I digress.  :)

“Game Over” talks about a few subjects, some of them E.T. related, but all of them related to the Atari 2600.  Some are from the business side, some are from the game play side, and some are from the fans, but a lot was about the excavation in the New Mexico dump where Atari buried a lot of unsold games (not just E.T.)  There’s also a few shots in there with kids playing the 2600 in their living rooms back in the day, which is a memory that is pretty strongly burned in my brain with my brother back in the day.    This documentary brought back a ton of memories, both positive (time spent with my brother playing Atari), and negative (fall of 3D Realms, based on what HSW said about the fall of Atari).   There was a montage at the end of old Atari programmers, and their major accomplishments (some with Activision oddly enough).  But I particularly loved Carol Shaw and the River Raid cartridge making an appearance.  One of the few Atari 2600 games that in 2014 is as good and as playable as it was in 1982.

As someone who lived through all this as a fan and then later on as a professional, I really enjoyed the documentary.  I remember all of this, the fall of Atari, the failure of E.T. and whatnot.  The 2600 continued on after E.T. for quite some time.  Everyone talks about how the industry “died” in the mid 80’s.  It really didn’t, but the super high level of success did die around that time.   Atari kept on putting out games for the 2600 until 1990 (with Klax being the final one – it was quite good, actually).

“Game Over” is oddly enough rated PG-13 by the MPAA here in the States, I assume due to about half a dozen f bombs by various talking heads in the thing.  It is available through the Xbox 360 & Xbox One consoles, via a special “Game Over” streaming app which you watch it.   It was to be part of a new Entertainment based initiative from Microsoft to provide original programming for the Xbox platform.  The initiative has gone away, but this was too far in production to stop, and has come out anyway.    Not anymore – it’s no longer available for free.

But a 10/10 for allowing me to wallow in my youth again, and actually showing me a few new angles on some old legendary stories from the past that I mostly knew about.   I always love learning something new about something I know a ton about, so that alone gives it a two thumbs up.