This article isn’t one that will go into the nitty gritty of game development, just a few fun memories of people, events, and things relative to Shadow Warrior. Here’s a quick look back at the second major Build game we released 20 years ago today. 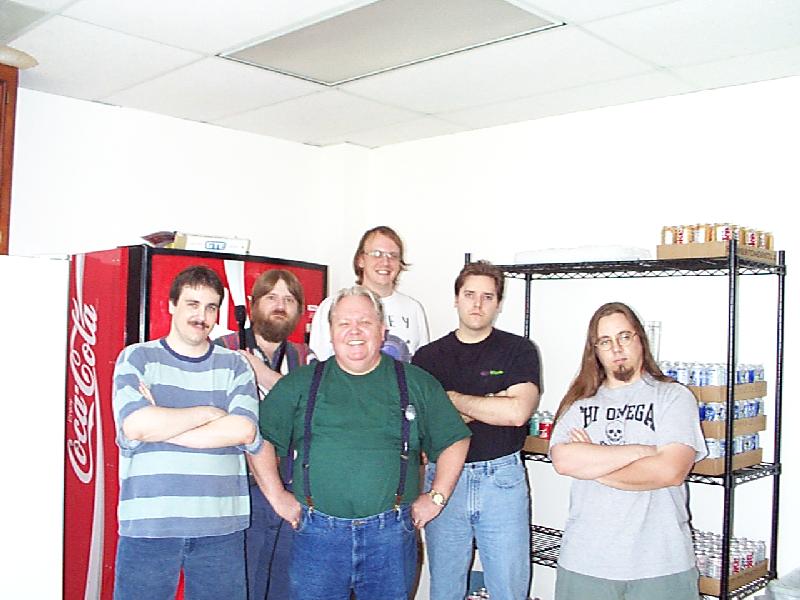 The photo above is team Shadow Warrior on a day that the voice of Lo Wang (John Galt) visited us.   Some info on the guys in the picture (L-R):

Lee Jackson – our legendary sound and musician Lee worked both in our tech department and also wrote music to many of our classics including Rise of the Triad & Duke Nukem 3D as well as “Grabbag” (aka the theme song to Duke Nukem).

John Galt – John was of course the voice of Lo Wang.  He also has a career as voice over artist, and was “Grandfather” in the 2006 version of Prey from 3D Realms & Human Head.

Keith Schuler – Keith had been with us for some time, and was responsible for the titles Paganitzu & Realms of Chaos besides Shadow Warrior.  He also worked on several other titles like Duke Nukem 3D.

Jim Norwood – Jim also was responsible for the side scroller Bio Menace from us.  That was the only game released using licensed tech from id Software’s second Commander Keen game.  Something unique!  You can read Jim’s “Legacy Interview” here.

Stephen Cole – Steven joined us during the development of the Atomic edition of Duke Nukem 3D, and was one of the main mappers on Shadow Warrior, as well as working on early versions of Duke Nukem Forever.

Of course, a video game (even a 20 year old one) isn’t created by just a couple of guys, and there were more than just these six, one of the other mappers was 3D Realms vet Joe Selinske, plus of course Scott & George and several others (Michael Wallin, Ken Silverman, and the late Stephen Hornback).

Being 3D Realms, we released a lot of other ancillary, and sometimes strange extras to go with our games.  Here’s a collection of some of them.

One of the lesser known items were the two print novels for Shadow Warrior.  They were titled “For Dead Eyes Only” and “You Only Die Twice“, both of which were parodies of Ian Fleming James Bond novels.  Written by Dean Wesley Smith & Ryan Hughes respectively, these two novels were released in October of 1997.   These two books are long out of print, but if you want to try your hand at the used market, they are still listed on Amazon.com.  Check out the links above.

Back in the day, 3D Realms harnessed their legacy as a shareware game publisher, and made the first chapter of “For Dead Eyes Only” available for free on their website.  That page and chapter are still available to this day, if you want to read some of these novels, you can.  Check it out here.

While it is not a novel, there was also the Shadow Warrior Strategy Guide.  Most games then (even now) had one.   Here’s a couple of pictures of it.  You can still get this used through Amazon.com if you’re so inclined.

During the development of the game, John Galt produced a lot of voice work for the game.  Towards the end of development, Lee Jackson noticed that several of the phrases used could have gone together in some sort of rap, so that’s what he did.  Produced a song called “Lo Wang’s Rap”.  There was nothing done for Lo Wang’s Rap that was new (insofar as the voice work goes).  It was just a masterful rearrangement of John Galt’s voice work by Lee.  It ended up being played over the closing credits of the game!

The song has been available for download from the 3D Realms site since 1999, and still remains to this day.  You can download an mp3 of it, or just listen to the embedded Youtube video below. 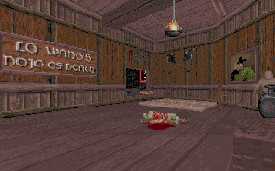 In addition to the usual printed strategy guides, we also had a walkthrough for Shadow Warrior on our website.  Given this was 1997, this was probably one of (if not the) first ever such online guide to a game put on a website.  This walkthrough remains to this day.

There’s actually two of them.  There’s one that is a straight up walkthrough, and a second that shows you were all the secrets are.

You can visit these on the old 3D Realms Legacy Website.  The walkthrough is here, and the secrets list is here.

The registered CD version of the game came with CD audio – at the time also something not done much.  To that, we provided a list of the various tracks that comprised the Shadow Warrior soundtrack.  All of these tracks were composed by our own Lee Jackson.

We also had John Galt do a short “interview” as Shadow Warrior which we put on our website.  It was of a different time.  So much so that the files were produced in the old “Real Audio” format.  However, nobody uses that in 2017, so we have the sound files available as wav files to listen to.  :)

Q: Lo Wang, tell us about some of your favorite weapons and why you like to use them?

Q: What do you think of American drivers, after your short visit in the United States?

Q: Any advice for other 3D game heroes that might try to compete with you?

Q: As you prepare for a fierce battle, what runs through your mind?

Lo Wang, thank you for this short interview. We know you’ve got a lot of work to do to get ready for Shadow Warrior. Anything else you’d like to say to the fans here?

Over the years we’ve been asked several times whatever happened to the Shadow Warrior add-on pack, Wanton Destruction. This add-on was produced by a company called Sunstorm (featuring then 3DR developer Charlie Wiederhold). The add-on was completed, but then shelved by the distributor. It wasn’t our choice, and it wasn’t Sunstorm’s choice. So the product sat. Eventually Sunstorm went out of business, and the product essentially died. As time went by, we at 3D Realms had thought the product was lost. We never had a copy ourselves of the add-on, and with the company non existent, the chances of releasing it were pretty much zero. We tried to locate it a few times over the years, but pretty much gave up hope, and wrote it off.

Then on Sep 5, 2005, we got an email from Anthony Campiti, the former President of Sunstorm. Anthony tells us that he discovered a CD called “Add-on Archive 1”. Much to his surprise (and ours), this CD contained the completed version of the Wanton Destruction add-on. A few emails were exchanged, and a CD arrived at 3D Realms HQ on a few days later with the materials!

We ended up releasing the Wanton Destruction add on pack for free on our website the day after we got it.  Our original news story is still available, if you care to read it.   Most of this text is from that story, but we thought we’d pass on some of it for the anniversary, as it makes for a good story.

The picture here was something that’s been released before, too.  It’s a prototype box for the retail packaging for Wanton Destruction.  It was quite nice too – the front opened up and had additional art without the insides of the box being “opened”.  It was, however, the only one we had.  When the old version of 3D Realms ceased to be a development studio in 2009, the box was in my possession, but was handed over when I stopped working there.  No clue where it is in 2017.

There was a second add on called Twin Dragon.   That has a less exciting story, and was released a few years later after being discovered in similar fashion.   Finally, there was a third one called “Deadly Kiss”, but it remains unreleased to this day (and we can’t remember if that one was even completed).

Behind the Scenes Photos

Here are some behind the scenes photos from Shadow Warrior development with captions.

Some years later, Devolver Digital purchased the rights to Shadow Warrior, and put out an excellent reboot game in 2013 called oddly enough “Shadow Warrior”.  The new version of the game kept much of the flavor of the original, but without the Asian angle of the protagonist.  It’s a worthy reboot, and has spawned its own sequel, the even more oddly titled “Shadow Warrior 2” (har).  Both of these games are worth your time, and are available on PC, Mac, PS4, & Xbox One.   You can get more info about Flying Wild Hog, Devolver, and the new Shadow Warrior here.

The original version of Shadow Warrior is still available on Steam from Devolver as a “free to play” game.  There was an updated version titled “Shadow Warrior Classic Redux” with improved visuals.  That isn’t free, but is available for $9.99. 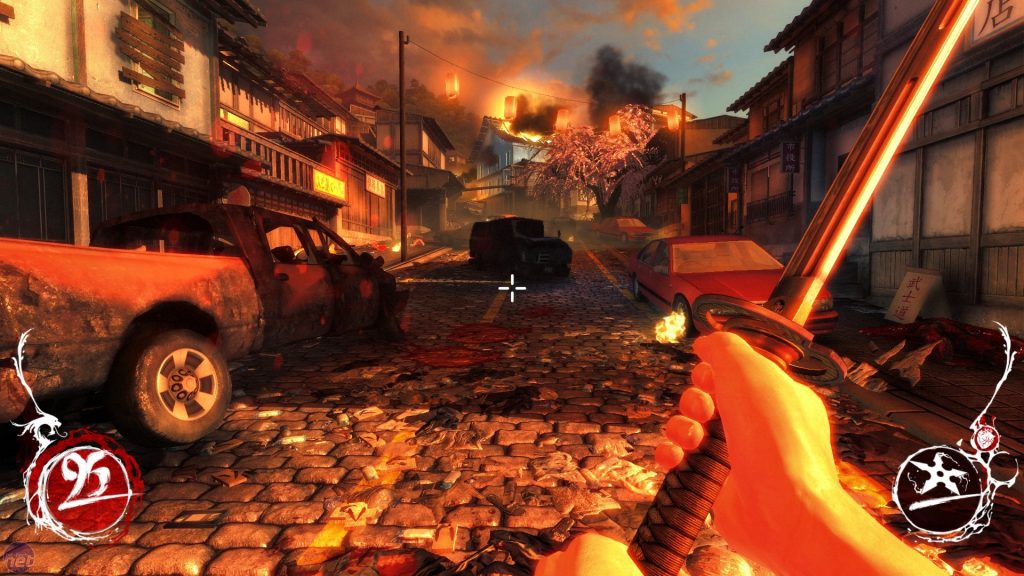 Shadow Warrior was like most games produced at Apogee/3D Realms.  Fun game, fun people, fun times.  Most don’t remember it as well as they do Duke Nukem 3D (like Elliot Chin for example), but that’s a shame.  Was a fun action game when released.   Had a blast playing WangBang back in the day.  The game is available in 2017 for free through Steam (thanks Devolver!).  So if you’ve never checked out a classic, go do so.

Thanks for reading.  If you enjoyed this, check out my other writing on this blog, as I’ve covered several old Apogee/3D Realms titles here.

P.S.  Hey Mike Wilson – I got all the way through without saying “Shower Warrior”.  But it was in my mind while writing.  :)

P.S. 2 – If you have Shadow Warrior Classic on Steam, an update was just pushed through after I published this article.  Apparently Fred Schreiber of 3D Realms sent over some materials to Devolver from the earliest days of Shadow Warrior.  A playable alpha and beta of the game, so when you go to start SW Classic on Steam now, you get the choice as to which version you want to play.  Very cool guys – and it is all free!  As I said earlier, if you don’t have it on Steam, go get it, it’s totally free. 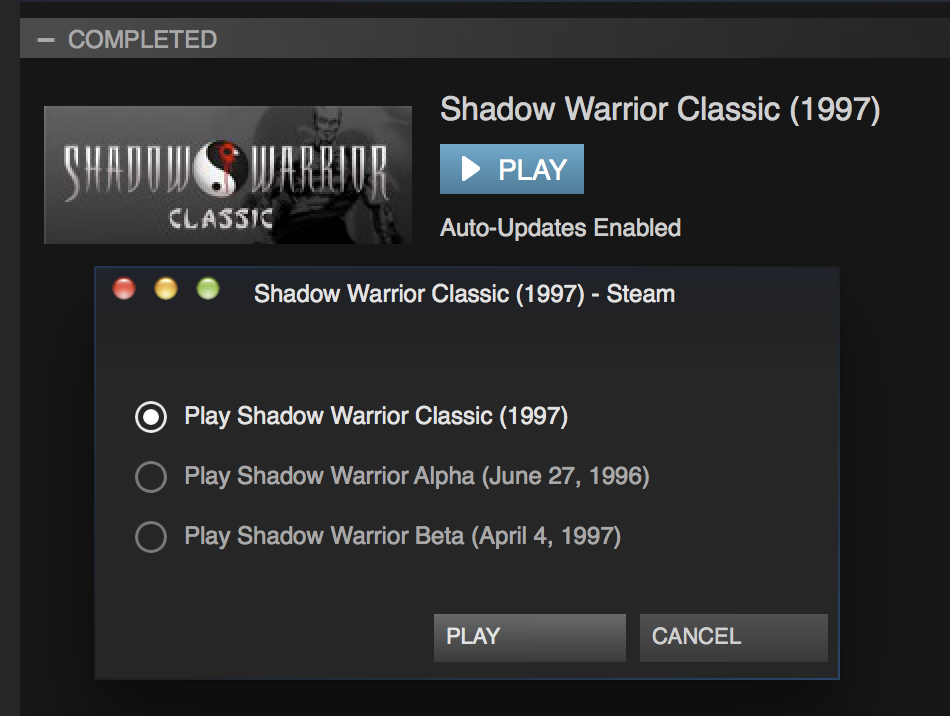 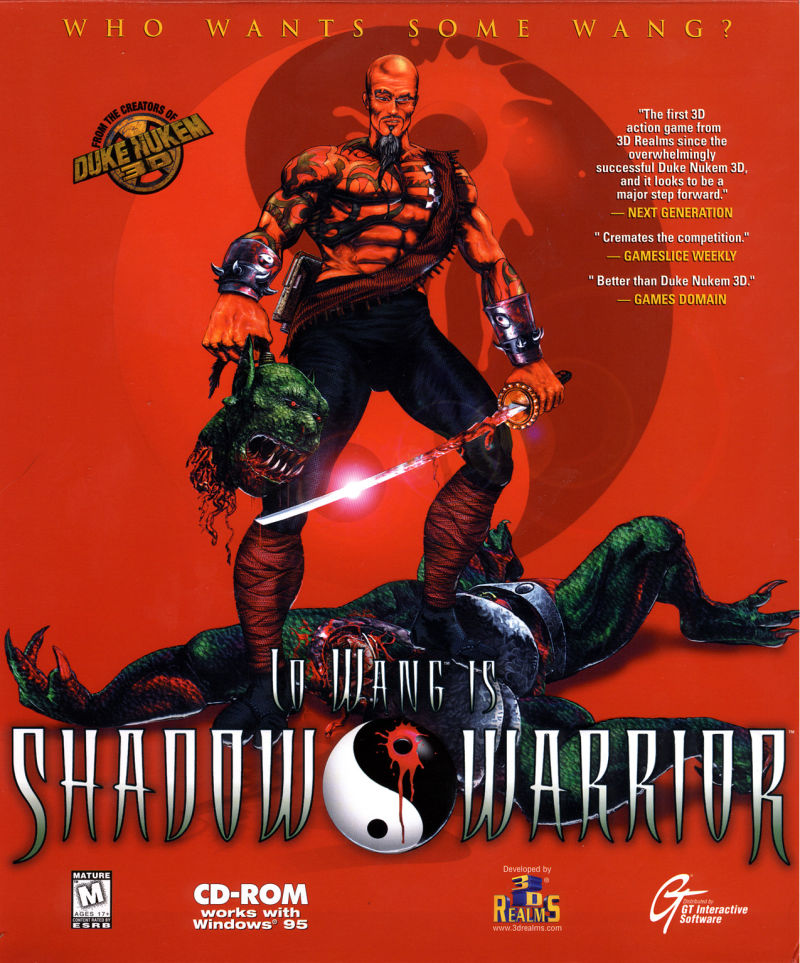