May 5, 1992.  That was a date that forever changed the landscape of PC gaming.  That was the day that id/Apogee released Wolfenstein 3D v1.0 – a full quarter century ago.   In 2017, not many people need a history lesson on Wolf3D, but it was the 3D shooter that redefined what was possible on PC tech 25 years ago.   The public had seen nothing like it, and it took the industry by storm when released. 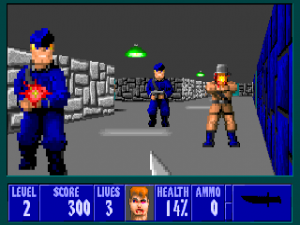 For me personally, I was so blown away by the game, that I ordered the full version immediately, as did many thousands of other game players.  I was also one of those annoying customers that kept calling Apogee to find out if it had shipped yet.  To the point that when I finally started working there, one or two of the order people remembered my name from my calls. :)   But when the game was released, I was so blown away I knew I had to get involved with the company somehow.  At the time, I didn’t know in what capacity, but I ended up moving to Texas late in 1992, and never left.  So the game changed my life permanently.

If you are reading this story, you know the history of Wolfenstein 3D. Authored by id, published through 3D Realms when they were going by the name “Apogee Software”, Wolf3D was responsible for a great number of people and companies doing what they do. The influence of this title goes way beyond what the mere pixels on the screen.  The game’s technology was licensed out to other companies (including our own), and was used in game titles such as Blake Stone: Aliens of Gold, Blake Stone: Planet Strike, Corridor 7, Operation: Body Count, and Rise of the Triad (1995).

Since the original release, the game has been ported to a ton of various consoles and systems. The list includes the Super Nintendo, Atari Jaguar, Macintosh, 3DO, Acorn Archimedes (huh?), Gameboy Advanced, and even the venerable Apple IIgs.  Additional ports later appeared on iOS & Xbox 360. Most of the older ports have long since been out of print, the links above mostly go to Amazon.com where you can try and get a used copy if you’re interested. 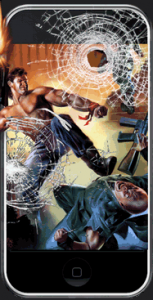 There were other games besides just ports, too. Going way WAY back, you have the original “Castle Wolfenstein“, and it’s sequel, “Beyond Castle Wolfenstein“. These were games that originally appeared on the Apple ][ (and later elsewhere). The original game was the major inspiration for Wolfenstein 3D (which is frequently called Castle Wolf3D, which it is NOT the name of the game). Appearing after Wolf3D was a true sequel game, called ‘Spear of Destiny” (which had it’s own addon packs too). There was also “Wolfenstein RPG“, a game for cellphones from id.

As I was involved in the original all those years ago, I wanted to point out a few cool extras I released through the 3D Realms site over the years.

The first is something called the “Wolfenstein 3D Super Upgrades”. The Wolf Super Upgrades was an addon pack for Wolfenstein 3D that we sold during 1994 and 1995. It comprised several addons for the game, including a map editor, multiple hundreds of maps, a random level generator, and some other related items. We originally released this as freeware on May 22, 2006, but we have something new to add here. Today we are releasing a document which we sent to our registered customers back in late 1994 about the Upgrades. In this pdf (which you can download here), you can see the sales letter we sent out, the original order forms, as well as a letter sent to people who bought the game. If you have the old DOS Wolfenstein 3D, check out the Upgrades pack (a zip download), there’s a lot of cool stuff there, and it’s free!  A quick technical note about the PDF download – it tends to not display right (or at all) viewed in a web browser.  You should download it and then look at it.

Finally, there’s a document which was our internal sell sheet for the game back in early 1992. If you want view that, click here. The sell sheet refers to two “trilogies” – this version of the game was long since discontinued, and sold as the more well known “six episode” version of Wolfenstein 3D. A bit of trivia, episodes 4-6 had their own name, “Wolfenstein 3D: The Nocturnal Missions”.   Speaking of trivia, check out this article I wrote some months ago on the history of the phrase “Call Apogee and say Aardwolf“.  Lots of fiddly trivia bits in that article about Wolfenstein 3D.

As I said earlier, Apogee/3D Realms still sells the original all these years later. You can check out the 3DR page for the game, download a shareware version of the game, and buy a classic for less than it takes to get a Starbucks mostly.  :)

One last little fun tidbit.  For the 20th Anniversary of Wolfenstein 3D, id Software made the original, three episode registered version of the game available for free to play in your web browser.  This is still online, head over to the id Software website to check it out!

While I don’t have my original purchased discs from 25 years ago still, I do have these items from over the years relative to “Wolfenstein”.  The Spear of Destiny box is rare, and it’s fully intact with all the discs, manuals, even mint condition registration cards!  :) 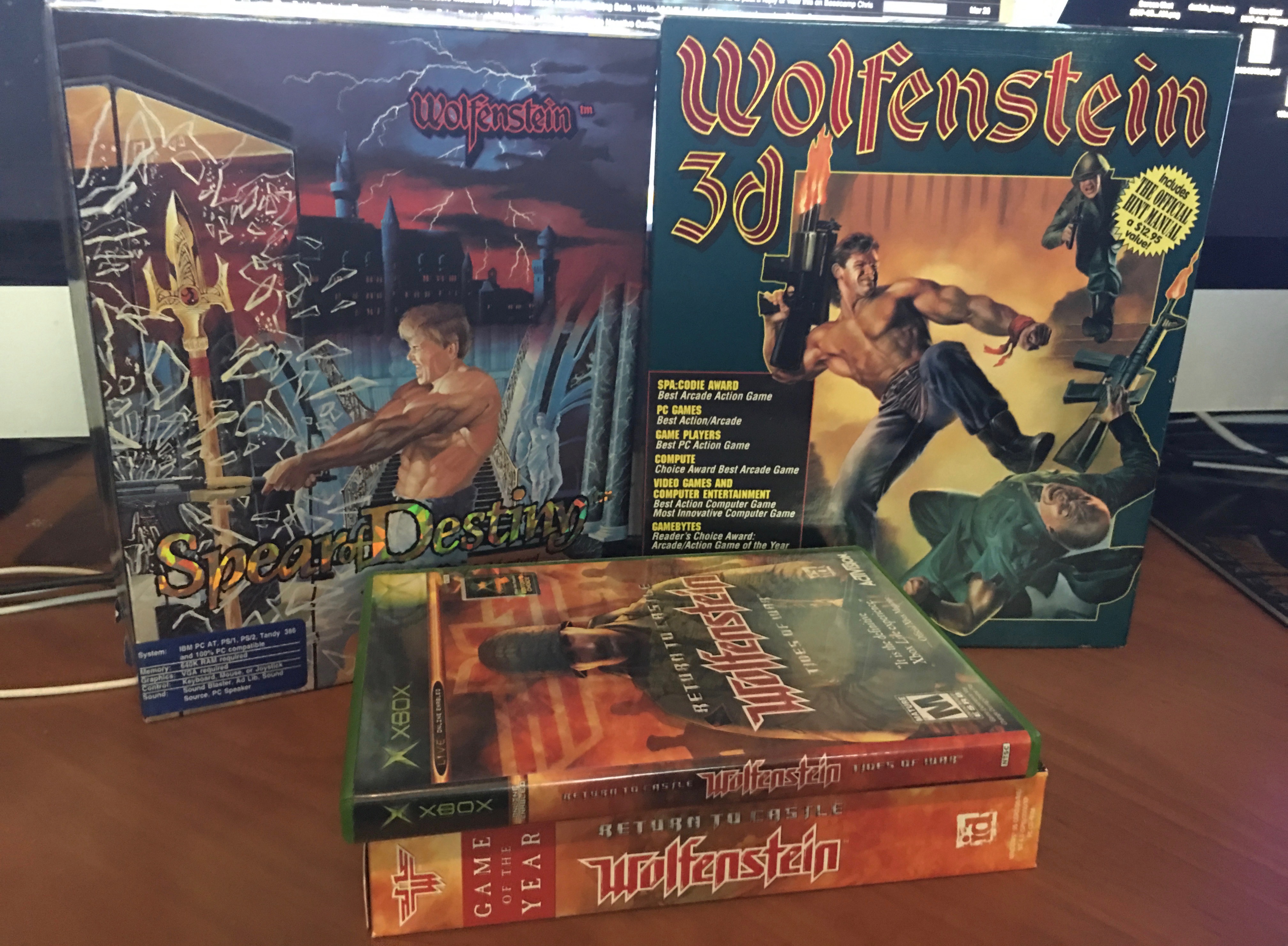 (This article was adapted from a piece I wrote in May 2009 for the 17th anniversary of the game (and updated today for the 25th).  The 17th edition was the last thing I wrote for the old 3DR website before my version of 3D Realms ceased to exist.) 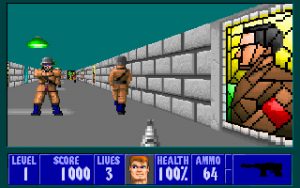 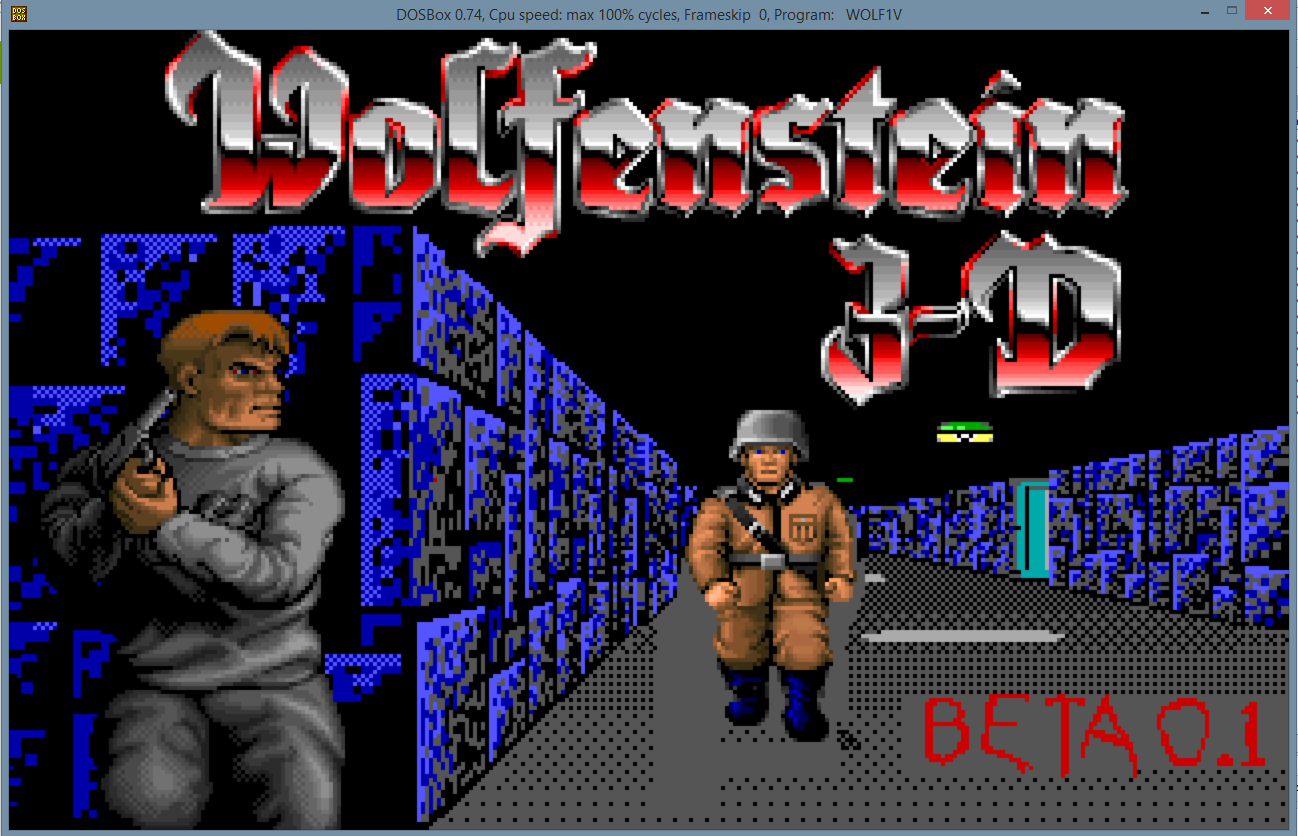