In the earlier years of 3D Realms, when we were known simply as Apogee Software, we were known for many popular games in the scroller genre.  Duke Nukem, Bio Menace, Hocus Pocus, Commander Keen, and many others.  But today we’re here to shed a little light on the 1993 scroller, Monster Bash.   Monster Bash turns 25 years old today, having originally been released on Apr 9, 1993! 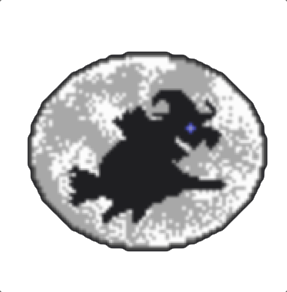 Monster Bash was a side scroller game by Apogee programmer Frank Maddin.  At the time, Frank was known for our 1991 title, “Crystal Caves”.  Monster Bash was a Halloween themed scroller, something we had a small fascination with for awhile, given the following year we released “Halloween Harry”.

Monster Bash was the story of an 11 year old boy named Johnny Dash who fought any number of ghosts, ghouls, and goblins in his quest to rescue his dog, as well as a number of other cats and dogs from around the world.  Here’s some text from the game’s story:

“Johnny Dash’s bash ’em smash ’em adventure takes him into the evil Under World of Count Chuck. The story starts when Johnny’s dog Tex is kidnapped by the Count, along with hundreds of other pet dogs and cats. The friendly bed monster under Johnny’s bed tells Johnny where Tex was taken, and how Johnny can use his secret closet passageway to get to the Under World himself. Count Chuck plans to turn all the pets into an army of undead monsters. Johnny grabs his slingshot and leaps into his closet. The Count will not turn his dog Tex into a monster, not if he can stop him…!”

3D Realms still sells this game directly from our website, so if you’re interested in checking it out, you can do so at our website here (it costs less than a single latte at Starbucks!) 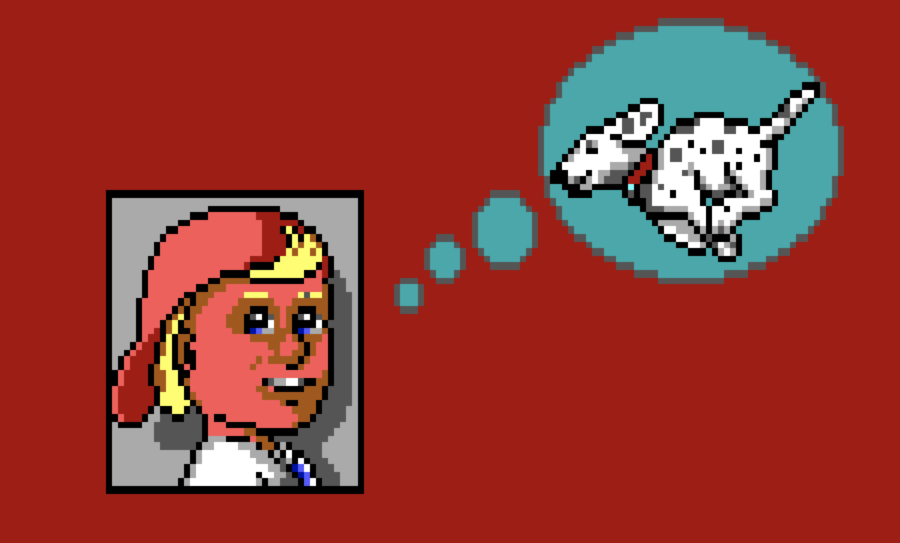 Here are a few stories about Monster Bash you might find interesting.

Monster Bash was pretty well received, but with every game we released, we would get the odd complaint or two.  Most of them were the kinds of things you would come to expect, but every once in awhile we’d get one that would stick out. Monster Bash got one of those kind of complaints.

Since a lot of the game took place underground, you would see things that would be “under ground” especially when several game locations took place in graveyards.   Given it was a 2D scroller, we would have objects under the ground.  One of them were feet.  If you look at the screenshot here, you’ll see an example of a pair of “feet”.

We got a complaint that the pair of feet to the right were “inappropriate” for a kids game, because they seemingly depicted two set of feet connected to people that were, well..  you figure it out.

Anyway, in an odd response from the same company that put out Duke Nukem 3D, we took that out.  The exact version that had the “feet” removed is lost to time.  The final version of the game was v2.1, and this was at least two versions before that (Monster Bash had several point releases). 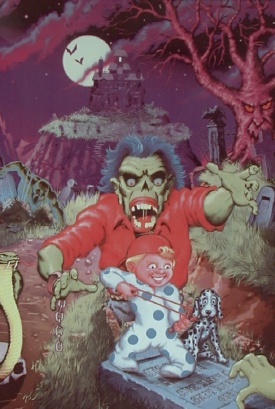 The feet thing aside, there was one other thing we noticed after the game published.   It was the artwork for the main character of Johnny Dash.  Johnny Dash is supposed to be an 11 year old male.  But for some reason, his clothing had well, a feature that only shows up on adult women.

You can see that if you look at the original game artwork to the right.

Memory says that we did NOT do this intentionally, and that it was discovered after the fact, when manuals and boxes were printed, and artwork was distributed, and it was too late to do anything about it.

Frank Maddin had a sense of humor about it, he wore a Johny Dash outfit to our 1996 Halloween Party.  You can see a picture of that below: 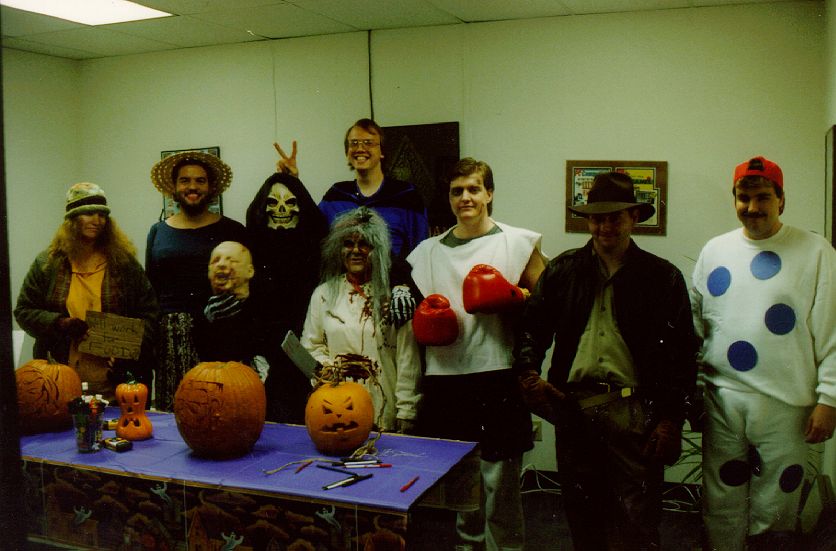 As we said earlier on, Moster Bash was released 25 years ago.  Back in those days, we didn’t have Gigabit Internet, cell phones that  could download faster than anyone ever thought they would.  The overwhelming majority of people out there still were using dial-up internet for access.  The bulk of THEM were using older, slower 1200bps and in some cases 300bps modems.  It took a long time to download things back in those days.   Even releasing a game took a while for us, as we’d have to upload it to all our major networked BBS’s around the country.  It’s not like it is today where you put it on one site and it’s everywhere around world immediately.

Back then you had to care about how big things were.  To that, Monster Bash’s original shareware release was the first thing we ever released that was over 1Mb in size.  Up until that point, everything (shareware anyway) that we had released was under 1MB.

It was thought at the time that when we released something “that large” that it would deter people from downloading it, so in addition to our standard shareware zip download, we also provided another version called “Monster Bash Lite”, which was basically the same shareware episode cut down in size.  It contained only three levels vs the number in the full shareware episode.  It was about half the size of the regular one.   On the aforementioned 1200bps modem, it would take a little over half an hour to download the standard shareware size game.

Keep in mind that the HTML and images that make up the page you are looking at now are multiple times larger than the original Monster Bash shareware download.  :)

Frank Maddin’s next game was a 3D shooter that was called Cybertank.  This game was never released, but like most games people work on in early form, objects and items were cannibalized from other games.   This was true for Cybertank, of course.   In its earliest form, we had no actual tank art, but Frank did use some artwork for Monster Bash.

Instead of tanks, Frank used couch artwork from one of the Monster Bash levels.  So you would be driving around in your tank not shooting other tanks, but shooting sofas.    We only have one surviving screenshot of that, so here it is: 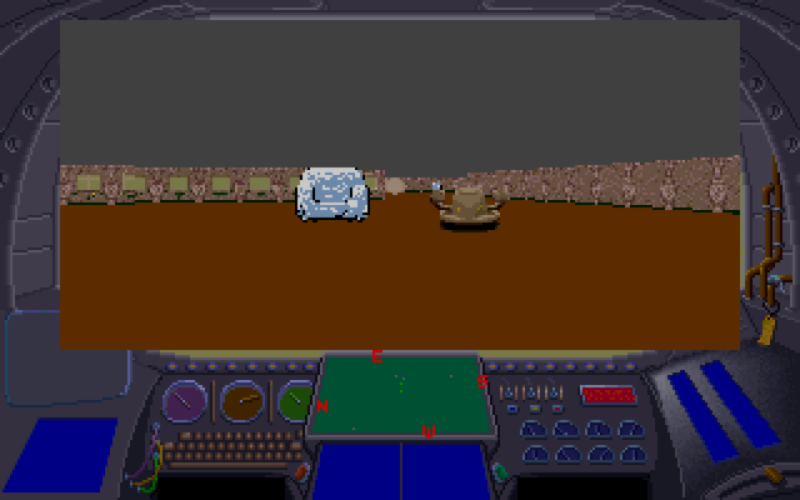 The Cybertank project was shelved, and never released.  Frank then went on to work on the original Shadow Warrior with Jim Norwood.   Shadow Warrior was Frank’s last project for Apogee/3D Realms.

So happy birthday to Monster Bash.  One of the more fun scroller games we ever put out, and one that still plays fairly well 25 years later in 2018.   If you never checked it out, go ahead and do so.  You can buy it from the 3D Realms site directly, or you can also buy it from Steam.

Johnny seems stuck like Bart Simpson is.  Perpetually the same age despite being around for over a quarter century now.  :)

Here are a few video goodies.  The first one is from David Newton, and is part of his larger “Stumblin’ Through 3D Realms Anthology” series.   He has Monster Bash as part of his 1993 video on 3D Realms.  Check it out here.  The relevant segment starts at 3:01 (if for some reason it doesn’t automatically go there).

The second is from Clint over at Lazy Gaming Reviews.  Clint does a full on review of Monster Bash in his six and a half minute interview, and is well worth your time to watch.

Finally, a couple of pictures are below the videos.  Thanks for reading, and thanks for playing! 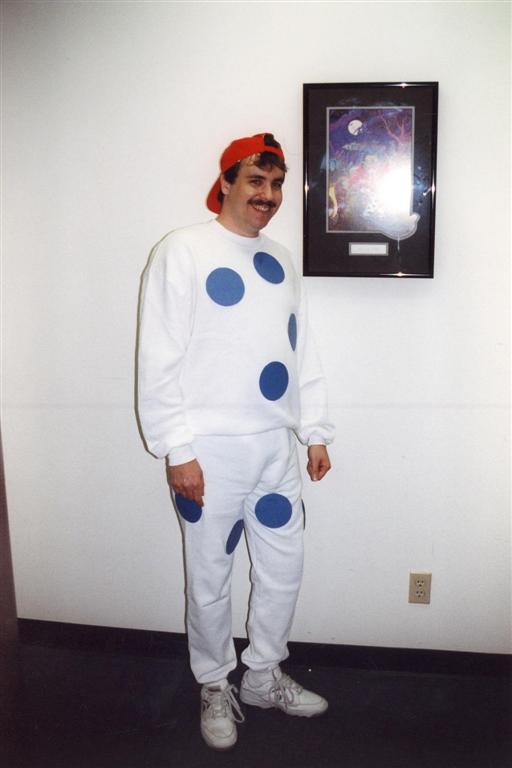