Last night I watched Star Wars Episode I as the start of my “Watch ’em All” project, and also as the lead-in to the new Star Wars film in a couple of weeks.  I had planned on watching them one per weekend, but there wasn’t enough time to do that, so I had to double up a bit. I had absolved my wife from watching Episodes I & II, as she really didn’t like them, so I had Episode II on today.

This is another movie that fans tend to hate, and this one I understand less than Episode I.  That one I get why people hated it.  This one has a lot more action, and virtually no Jar-Jar Binks in it.  It should have been set up for a much better reception, but people latched onto one thing and wanted to hate it… 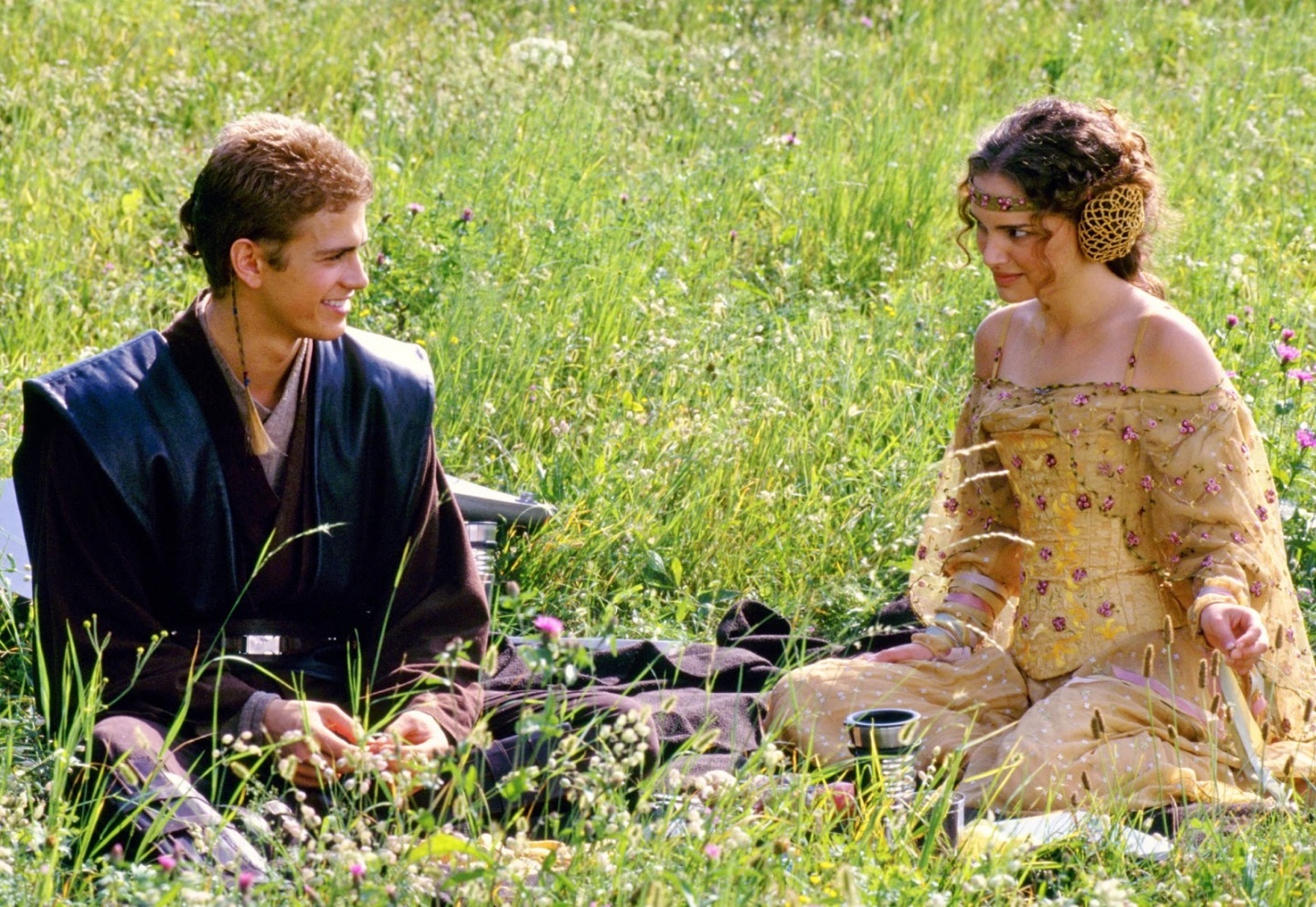 It’s this stuff.  The love scenes.  Now I agree with everyone about this stuff.  It’s just bad.  It feels out of place, and not because it’s a love story in Star Wars.  That’s actually kind of needed to setup why Anakin & Padme end up together – or at least are together for awhile.  The problem is Hayden Christensen and Natalie Portman have zero chemistry on screen.  Hayden Christensen was really whiny.  I mean annoyingly whiny.  The only times I actually enjoyed him in the role came in Episode III.  But in this movie, unless he’s being the way a Jedi should be, he veers off into annoying. Except for the part where he goes and destroys the entire village after his mom died.  That actually worked for me.  But all the other stuff from this part of the movie was pretty bad.  The floaty apple bit, the brooding, and ESPECIALLY the bit about sand.  That might be the worst dialogue in the whole movie. 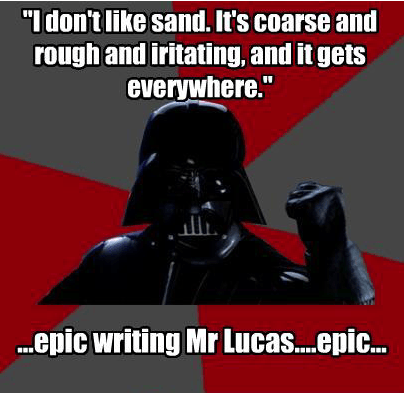 One amusing story about this.   Back in 2002, I went to see Attack of the Clones in IMAX.  It’s not like IMAX now, back in 2002 they were still bound by the limitations of physical IMAX film, which is RADICALLY larger than conventional film.  Due to that, there were limitations (again, back then, not now) as to how long a film can be.  Attack of the Clones was too long.  I forget exactly how much was cut out, but I’m pretty sure it was around 20 minutes.  It made the film a LOT tighter.  While there were trims everywhere, a *LOT* of the love scene stuff was cut out.  I had seen it both ways in theatres, and this was far more enjoyable.  This only happened due to the physical limitations of IMAX film.  I enjoyed this version a lot more than the conventional version.  There’s a list on IMDB of some of the things cut out.  Unfortunately, this trimmed version has never been released on any home video format, and LucasFilm has said it never will be either.  Darn. 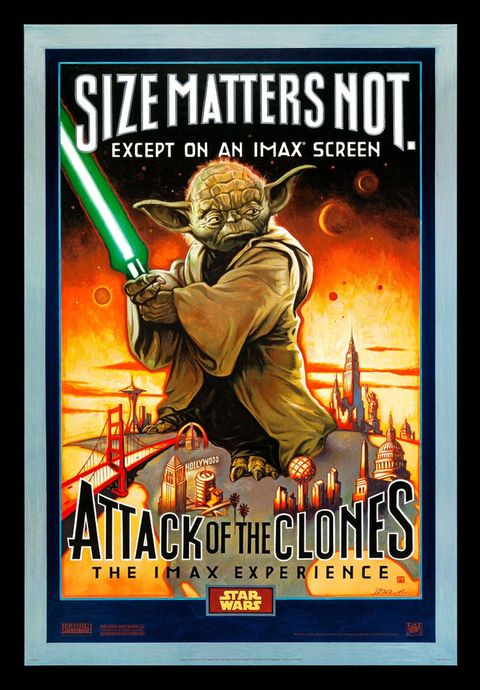 But back to today’s viewing. Basically, this is an improvement over Episode I, but still has some of the same problems.  Hayden Christensen, who plays Anakin Skywalker, is rigid at best, or annoying at worst.

One big positive is that Jar Jar is way in the background – this is good. He’s still there, but barely has any screen time. I have to imagine that was a direct reaction to the negative response from Episode I.  In fact, one of his few scenes was cut in the IMAX version, so even less there!

This one seemed to have a lot more action than the first one did.   Early on we had a fun chase through the streets (sky streets?) of Coruscant.  It had fun action, and I loved the way the characters interacted with each other.  Even Anakin.  He was enjoyable here.  The action did remind me in places of a bit of Blade Runner & Fifth Element.

When we eventually got to the planet where they were making the clone army, I loved the look of that.  The very white looking army was one that I really enjoyed, especially the people who ran it with the giant necks.  I can’t tell you WHY I like it but I have since the first time I saw it.  And speaking of how things looked, the fight with Jango Fett outside with Obi-Wan in the rain I particularly liked.   Had a visual style that I enjoyed.

Not long after that they had one of my favorite bits – there was a chase through an asteroid field, and Jango tried to take out Obi-Wan’s ship with “seismic charges”.  I *LOVED* **LOVED** the sound effects there.  This mine would get launched, and for about a single second before it exploded, there was this null sound – similar to the null sound in Star Wars Episode VIII that everyone got bent out of shape over.  Anyway, this null sound happened, and this extremely destructive mine went off right after that.  It was a seriously epic wall of sound.  So much so that I used to use this scene to show people how the 5.1 speakers in my home studio would sound.  It was VERY impressive.  Makes me wish I could have seen that in a Dolby theatre – I love those now, this scene in a Dolby theatre would have been epic.  You can see what I’m talking about here.

Other bits I really liked in this movie were..   Christopher Lee!  I mean come on – he was perfectly cast I thought.  A bit unbelievable in light saber battles, but as a character and a speaking performance I really loved him.  Then we got that big battle on Geonsis with several dozen Jedi fighting all at once.  It was a really fun scene, and I almost played it back a second time today when I watched the movie again.  One specific scene of all of them running with their sabers out is a particular favorite shot of mine.

It wasn’t all good.  Aside from Anakin’s acting, I thought the scene with the chompy bits on the conveyor belt were weak.  It reminded me of Galaxy Quest… “This episode is poorly written!”  Also, while it wasn’t a huge negative, it seemed odd that everyone in the movie seemed to be someone else’s former padowan learner – that extended into Episode III a bit, too.

Then there was Yoda.  Ever since Empire Strikes Back, people have clamored to see Yoda with some light saber action.  Well, we finally got to see that in this movie, and for me it was a bit of a mixed bag.  The moment he showed up in the scene he fights in, and whips out the light saber, the audience I had on Night 1 went absolutely apeshit bananas over it.  It was truly epic.   Then the fight started, and it was like watching a Mexican jumping bean.  I mean due to the physical size of Yoda, he’d have to do stuff like that, but it felt odd seeing him actually fight.  Might have been more epic if he just pulled out his saber, and they got out of it without the fighting.    Still, it was a fun moment.

Finally, towards the end when all the main shit had gone down, Yoda says “Begun the Clone Wars Have”, and we cut to a montage of clones marching, imperial ships taking off, and John Williams’ Imperial March in its full on glory.   That was quite excellent!  It would have been so much better to end the movie on that vs watching Anakin and Padme get married. I mean, we needed to see that, but ending with Imperial March would be much cooler.

Bottom line, this was WAY improved over Episode I.  Whether Lucas took people’s reactions to heart or not, I don’t know.  But most (not all) of what was wrong with Episode I was out of this movie.  I think most people tend to hate it because of the love story stuff, but beyond that, I thought it was an excellent movie filled with fun bits that I really enjoyed.   It’s not my favorite of the prequels (That’s Episode III), but this is a very strong second place.

Just wish I could see the IMAX trimmed version again.