Yesterday I was in a Star Wars mood, so I plowed through a couple of the prequels.  Episode II in the afternoon, and Episode III in the evening with my wife and daughter.   This is by far the best of the three prequel movies.  Might not write as much about this one as some of the others, but that’s because it’s all good, I can’t think of anything I actively disliked about this movie.

I remember when it was first announced that George Lucas was doing the prequels, I knew I would like this one, because it would by default be the darkest one, fall of the Jedi, and the Sith taking over everything.  Turns out that was absolutely correct – that’s the way this one went down.  Jedi were almost all killed. watching Anakin’s transformation to the Dark Side.  Was all good.

After watching it again, two major bullet points in everything stick out to me.  If these two things had not happened, the Star Wars universe wouldn’t have turned out the way it did.

But this film had a LOT going for it.  In fact, I don’t have a lot I don’t like.  The handful of things I didn’t like were: 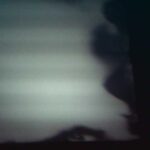 This film, like all the other Star Wars films (except the original) I saw on opening night.  I saw that just to mention the theatre was packed, and filled with fans who really wanted to see the film.  All was well until the point that Anakin had burnt already, and Anakin was going back on the ship that took him where he had his battle.  On there was Padme, and a second or two after that, the film got stuck – and melted.  It was a hell of a time for this to happen. Right towards the end of the film.  People freaked out.  Some ran out of the theatre to try and get in one of the other showings, but management was in quickly, and asked us not to go anywhere.  We were down for about 5 mins, and when it came back, it was the next reel of film.  That reel started with the helmet being lowered onto Darth Vader’s head.  We missed the birth of the twins and most of the Vader suit construction.  I even have a picture of the melted film as you can see to the right.

We all got free passes, and I recall that night rushing home and finding a bootleg copy online so I could see what I missed.  That will not be a problem with Episode IX now, as everything’s digital.  But it was a very inopportune moment for film to melt.