NOTE: On a personal note, this was the first story released after I was born.  I was born in-between Seasons 2 & 3.

1st of 4 "Galaxy 4" episodes. Only Ep 3 survives, the rest were released as animation in Nov 2021. I'm doing this out of order, as I wanted the animation for my posts. pic.twitter.com/GdslZC7L3A

The crew explore a planet after witnessing a "Chumbly" examine the Tardis. They're taken prisoner by the Chumbly, but are rescued by the Dhravins. They all go back to the pic.twitter.com/chfvmlBsjc

Dhravin ship. The Chumblies belong to the Rills, and they're at war. The two sides have broken spaceships, but the Dhravins needs capture the Rill ship to escape. pic.twitter.com/yLzCk3yoER

A side note. I love the look and the sound of chumblies. That sound they make when they do something is oddly pleasing to me. Really shouldn't be, but it is. :) pic.twitter.com/wbWNmqmKxE

The Doctor figures out the planet will die in 2 days. The Chumblies try & fail to break into the Tardis. The Drahvins want the Doctor to capture the Rill ship. When he refuses, pic.twitter.com/keMMfygPP4

they force him to do so. Steven tries to cause dissension within the Dhravins. The Doctor/Vicki go find the Rill ship, finding an advanced race, but get scared of their visage. pic.twitter.com/0En4LTqi6M

The Chumblies take Vicki to the Rills. The Dhravins continue to hold Steven hostage & wait for the Doctor. We discover that the Rills are actually quite friendly. They tried to help pic.twitter.com/gNCZdNkhFR

the Dhravins, but were attacked. After the Doctor almost kills the Rills, they offer to help rescue Steven from an airlock. Several chumblies come w/The Doctor & Vicki to rescue him. pic.twitter.com/IbkmjV4gWK

Steven is saved from the airlock by the chumblies, who cut open the door. Maaga continues to try and kill the Rills and take their ship. The Doctor offers to power the Rill ship so pic.twitter.com/HGeMjVf0ev

they can leave. The Dhravins attack the Rill ship, but are unable to stop them leaving. Our crew returns to the Tardis & escape, leaving the Drahvins behind when the planet explodes. pic.twitter.com/lzf9a3QEtz

Admin Note: The animation for this was done in both colour & b/w. The show was originally in b/w, so that's the way I wanted to watch the animation. But the colour does look good. pic.twitter.com/MynWQZZ2z6

Admin Note: The next story in chronological order is “Mission to the Unknown” – the “Next Episode” at the end of the story says this. However, when I did these episodes originally, I skipped Galaxy 4 when it came up next after The Time Meddler. The reason was at that time, the Blu-Ray of the story was due to be released in about two weeks, and I wanted to wait for that. So I did the next three stories, then went back and did Galaxy 4.  When i finished Galaxy 4 here, I then carried back on with the next story after Daleks Master Plan – “The Massacre”. 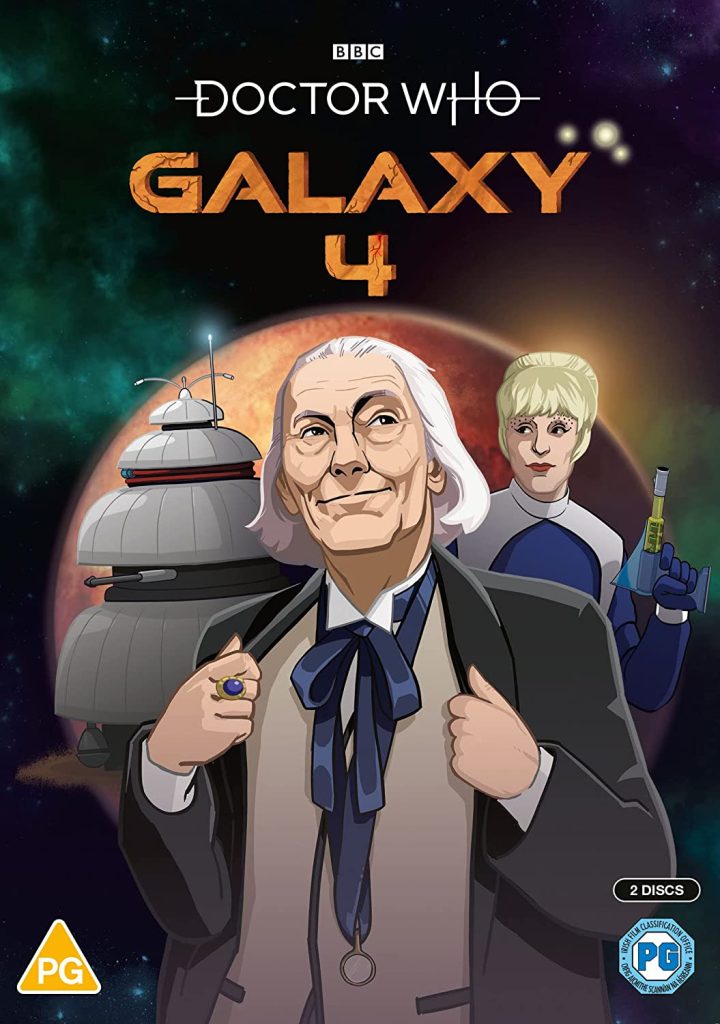