NOTE: This is the first Doctor Who story to abandon the use of individual episode titles.  From this point forward, each story is Episode 1, 2, etc – at least until the modern show relaunch in 2005.

The Savages is a totally lost story, it's all telesnaps. Overall it's a pretty common Sci-Fi story. Two societies inhabit a plant, and one of them is exploiting the other, and our pic.twitter.com/IJN8Nj9tHg

characters get in the middle of it. The two are called Elders & Savages. As usual, things are not as they initially appear, despite the Doctor being well respected by the Elders. pic.twitter.com/mlRKjqhTja

We learn more about the Elders. They literally keep themselves healthy by draining the life force from the Savages. The Doctor is appalled, tries to stop it, and gets put in the machine. pic.twitter.com/rbQuxGbbF2

The energy taken from the Doctor results in them wanting energy from Dodo & Steven who are then hunted by guards. Said hunt takes up the bulk of this episode. Hartnell barely in this ep. pic.twitter.com/ULeuruNwyY

Steven & Dodo escape with the Doctor who is very affected by the energy drain. Our crew are helped by the Savages. Jano the Elder leader is affected by the transfer, seemingly acting pic.twitter.com/goUFy4N1aK

like the Doctor. In the end, Jano helps our people destroy the transference machine.

This is also the final story for Steven. At the end, he makes an emotional goodbye from the show. pic.twitter.com/veJkSf0JGi

Overall, I really liked this story - while watching I found myself wanting to watch the real story more. This was never one of my favs, but this rewatch changed that opinion for sure. pic.twitter.com/u3GJL3Hx60

NOTE: I also wrote a review for this story for another Doctor Who website which was mostly based on my tweets here.  Here’s what I wrote.

When most people think about the William Hartnell era of Doctor Who, they usually gravitate towards perhaps the first ever story, the first Dalek story, or perhaps his last story.  If they’re going a little deeper, they’ll hit one of the other Dalek serials, perhaps a curiosity like the Gunfighters.  Rarely do people go over deep cut stories, and especially not one of the several that are missing.  But that’s what I wanted to talk about – one of the missing ones, “The Savages”.

Aired from 28 May to 18 Jun of 1966, this is one where all four episodes are gone.  We have a handful of tele snaps to get by with.  They’re the source of the reconstruction which is what I watched when I got to this story in my “watch every episode of Doctor Who” project.  Because it was a missing story, I didn’t know much about it.  In fact, watching reconstructions brings its own challenges as they can frequently be not that good either from the fact that it’s hard to know what’s going on when the main focus is just audio, or the particular reconstruction isn’t as good because there aren’t as many pictures here, but this one wasn’t like that.  I found that I really enjoyed this story, and really REALLY wanted the thing to exist so I can see it properly, but I can’t. 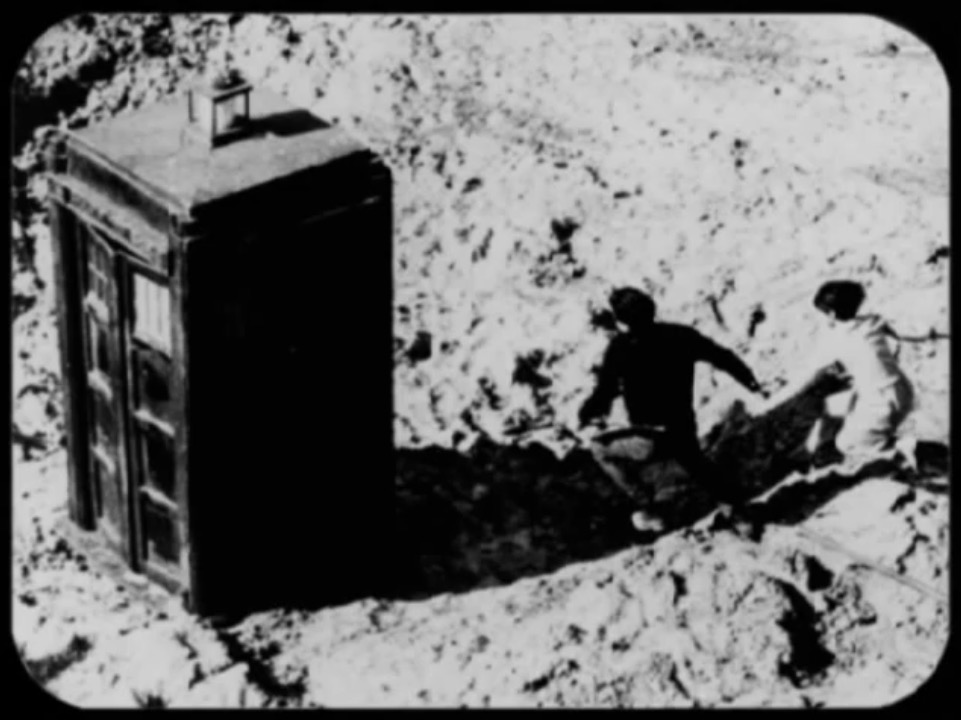 It’s a very modern thinking story where two societies inhabit a planet.  One is exploiting the other, and the Tardis crew get in the middle of it.  The two “Races” are called the Elders and the Savages.  The Doctor is initially well respected by the Elders, they massage his ego, and he’s admiring their culture.  Steven & Dodo get separated from the Doctor (huge shock there), and they do some exploring.

We learn more about the elders, they maintain their healthy life by literally draining the life force from the “Savages”, leaving them either dead, or severely incapacitated.  Once the Doctor learns this is happening, he’s quite aghast and tries to stop the proceedings.  In doing that, the Elders realize that the Doctor is of greater intelligence than the savages were, so they decide to put the Doctor in the draining machine, thinking it would give them a massive power boost.

After the Doctor is in the machine, he’s severely affected by the energy drain at which point the elders think they can get more energy from Dodo & Steven, so they are hunted by the elders.  The hunt takes up most of Episode 3, and Hartnell is barely in it – could have been one his famed vacation episodes, but the Doctor plot wise was really out of it.

In the last episode, the Savages help Dodo, Steven, & The Doctor.  An amusing thing happens to Jano – the leader of the Elders.  He has altered due to the draining of the Doctor, he starts acting like the Doctor and immediately realizes that what they’re doing is immoral, and assists in destroying the transference machine.  There’s a funny scene (I assume) towards the end that shows people destroying the machinery.  I get the impression that must have been fun to film, the intentional destruction of the set like that.

There are a few visual shots I would have loved to have seen.  Besides the aforementioned destruction of the machine, there was a scene from the start of Episode 1 and spears being thrown at the Tardis while Dodo & Steven escape.  But of course the thing I would have liked to have seen most is the departure of Steven Taylor.  He leaves the show at the end of Episode 4.  We do have a super short clip of this scene via a fan filmed 8mm film extract.  But it’s not the same as seeing the real sequence.

This doesn’t seem like the kind of story that early 60’s Doctor Who would have pulled off, but this reconstruction left me intrigued and wanting to see more.  While I’d be really surprised if this is ever recovered, I hope some day to see it animated at least.

In the past, I could never call this one of my favorites, but this rewatch changed my opinion for sure.

One small postscript.  From a production standpoint, this was the first story ever NOT to have individual episode titles.  It was “The Savages” Episode 1, 2, etc… vs the way it had been up until this point where each specific episode had its own title.