The First Viewing of Shada

I used to attend conventions in the Philadelphia area quite frequently in the 1980s. Back then, it would take upwards of two years to get new episodes on local television, so for many fans, some of these conventions were a popular attraction – not just for the same reason cons are popular now, but because there were frequently new Doctor Who stories aired as part of the programming. Anyway, I forget what year this was, but one of the frequent guests then was John Nathan-Turner, who obviously worked on the show throughout the decade. He had been talking about various aspects of the show’s past, part of which was Shada, the lost masterpiece by Douglas Adams and a victim of industrial action.

As he was the new producer at the time it was cancelled, he had some insight into the steps taken to remount it. Of course, if you’re reading this site, you know what happened. It didn’t get remounted. It was lost. However, the footage still exists, and outside of the short clip used in The Five Doctors (and again in Peter Davison’s excellent Five(Ish) Doctors Reboot), I’d say pretty much nobody had seen the stuff outside of the BBC itself. 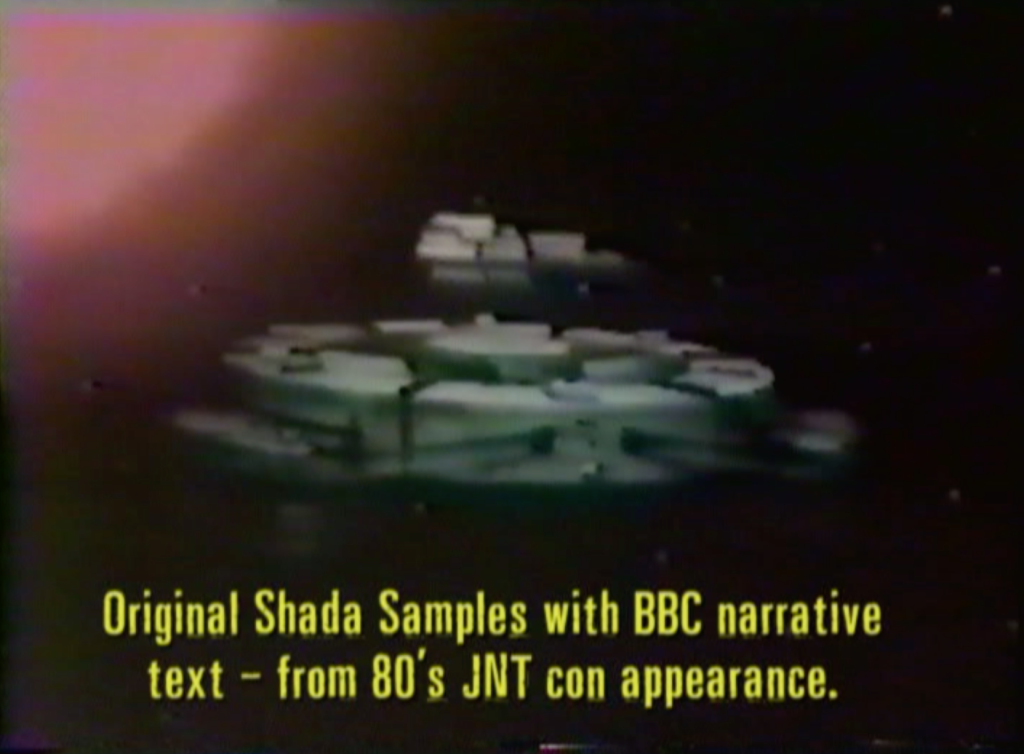 You have to remember this was the mid ’80s. There was no YouTube, no Bittorrent; you couldn’t just call up virtually anything you want on your computer, and there it is. This was the first public showing of Shada anywhere. We didn’t have the Paul McGann webcast, we didn’t have the Tom Baker narrated cleaned up version, and we certainly didn’t have the novel that’s out now.

So it was quite the bombshell that JNT laid on the crowd when he said that he had the tape with him and was going to show it in the main theatre room – but just the first two episodes.

It didn’t seem to phase anyone, we were about to see bloody Shada – in whatever form it was, it was a treat like no other. He did explain that he had all six episodes with him, but was only planning on showing the first two, because once you got into Episode 3, the bits that weren’t filmed outnumbered the footage that existed by rather a lot, and it got a whole lot worse once you got into Episode 6.

So we watched the episodes. It was really awesome to see it, even in the raw state. He wasn’t kidding about raw. If you’ve ever seen Shada, that first scene where Skagra wakes up the sleepers… In this version, there’s no nothing – so much so you can hear the actors rattling around in their seats as they act being woken up. It was QUITE raw. 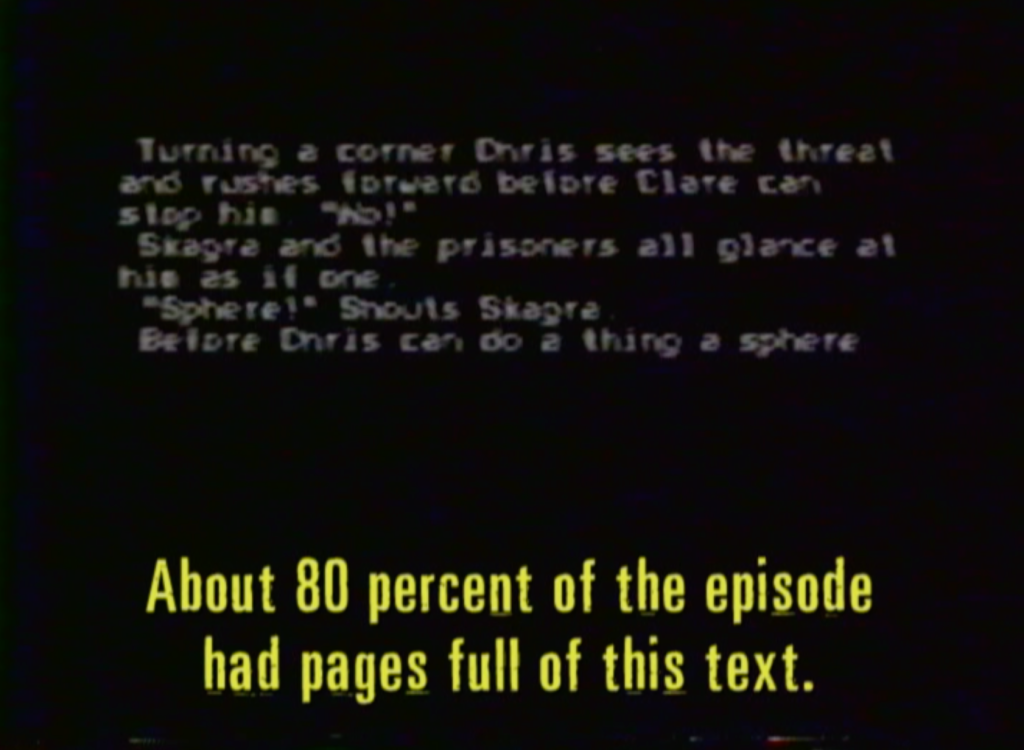 Then we got to the text. It was, however, a great moment, especially as it was shared with a bunch of people. Time edged on, and the two episodes ended. JNT got back up there and said that was it, much to the chagrin and protests of everyone in the audience. After some discussion, JNT got back up there and asked people if they really wanted to see the rest of the episodes, which garnered much applause.

He did, however say that they couldn’t show it in the main ballroom, as there were other events for the convention that needed to happen there; instead, they’d show Shada in the alternate video room, which ran all the time. But the alternate video room held something like 1/20th the number of people as the main ballroom, so it was a mad rush to get there.

Fortunately, I was close enough to said video room that I got in there right away, and sat. At that point, I have no idea what else JNT said about Shada, as I had bee-lined to the video room. After a delay, someone (no idea who, but not JNT) showed up with the tape, and proceeded to show Episodes 3 to 6 to those of us in there. If memory serves, they repeated Shada a few more times during the convention so others could see it (anyone else there who can remember being in subsequent screenings?). But the whole event was cool, given the atmosphere of seeing what was essentially a “lost story”.
As the convention went on, Shada was the talk of the event. Then another story got out: that someone stole the VHS tape it was on. Turns out, it ended up being true – someone said that the VHS tape that JNT brought with him was stolen so it couldn’t be shown any more. It was simultaneously something that made fans mad, and excited at the same time (due to a possible release of it in, uh, “traders circles”). 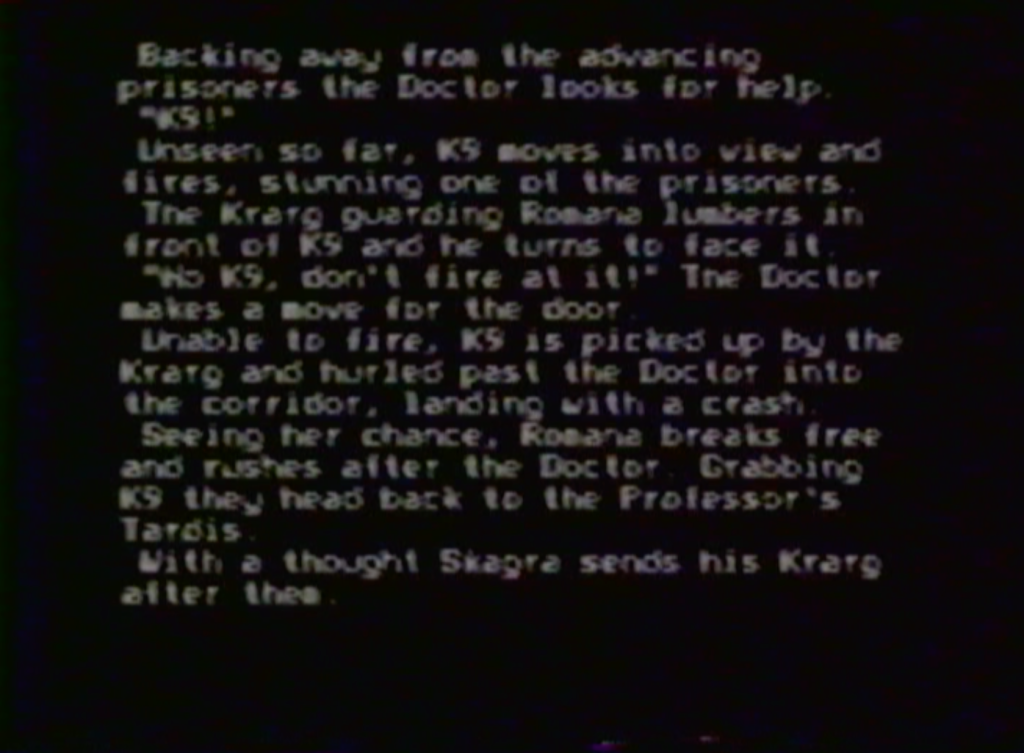 Shada is all I remember people talking about. I don’t even remember who the guests were outside of JNT, as I went to several cons back around that time, and it’s a blur some 30 years later. If you’ve ever seen the original Shada with the text you had to read, and no special effects.. It came from this copy. As far as I’m aware, all known bootlegs of Shada that weren’t “processed” came from this original release.

What I’d personally love to see happen is the modern show remount it and do a complete redo of Shada. They could use the same trick the McGann Webcast used some years ago by framing it around events of the Eighth Doctor and Romana as Lord President of Gallifrey. I thought that was bloody brilliant. Either way, you can now enjoy the story in the Legacy DVD boxset, but my prevailing memory is of that convention, when JNT made fandom buzz.

This version has never been released in any legitimate format anywhere, nor do I think it ever will be.  But for the few thousand of us that were actually there (vs those who lied and said they were), it’s a treasured memory into Doctor Who’s past.

NOTE: This article was originally published on the Doctor Who fan site “The Doctor Who Companion”.  You can view the original here.