I’ve been a TiVo customer since 2000. Been using their platform for the longest time. Back then when it was new it was billed as a PVR (Personal Video Recorder) vs a plain ol DVR (Digital video recorder).

Today the current owners of TiVo have turned it into a dumb DVR, by issuing a statement saying that they’re removing suggestions from the system.

I’ve often found cool things to watch in there. 90% of the time I don’t bother with what’s in there, but I have found a few things. Not anymore, they’re doing away with them.

Truth be told, they’ve been pretty pointless for awhile anyway. TiVo owners of old remember giving shows thumbs up or down (either 1, 2, or 3 in each direction), and the things the TiVo would record would be “tuned” to your personal likes. That was a great system. In years gone by, I spent a lot of time massaging my suggestions, so the things it recorded are more likely to be things I would want.

However, a few years ago in the new TiVo experience on the more modern boxes, they took away the ability to use thumbs to influence suggestions. There were still suggestions, but they were ass. Big time. I so rarely watched anything, since it wasn’t using my viewing patterns or thumbs to influence what was in there. I never figured out a pattern.

Then today they just did away with them. Said the feature will be going away – there wasn’t a concrete date, so it’s either “uh when?” or right now. But their note (in my screenshot) is below.

It isn’t just this, they’ve made a lot of dumb decisions over the years – the pile of all of them has soured me on TiVo. I’ve been a customer for 23 years, and the last several years the newer owners of TiVo (not the originals by far) have been slowly whittling away at what made TiVo cool back in the 2000’s. Given I have everything paid for, I’m not going anywhere, but if one of my TiVos breaks, I’m not replacing it. Not with another TiVo that is.

If Apple ever baked OTA recording into Apple TV (like Amazon had in the Fire TV recast which itself has been discontinued), I’d leave in a heartbeat. That’s saying something for someone who was a TiVo evangelizer for a few decades now.

UPDATE Jan 30: The software update that removed the suggestions was installed on my main TiVo, so they’re gone.  Fortunately I have an older model in the bedroom that can’t be upgraded to this software version (due to its age), and that one still does suggestions, so they survive in my house, just not on my primary TiVo anymore.  :( 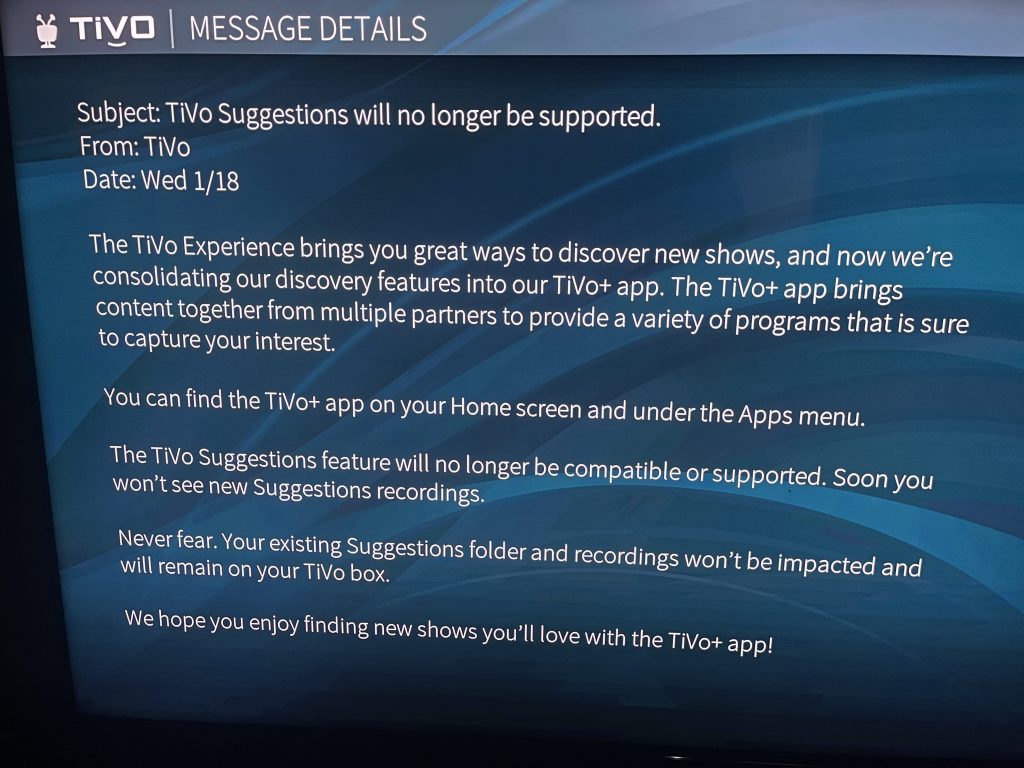