We have a houseguest

One of my wife’s bosses at work was going out of town for some training, and he has a 5 month old kitten. He didn’t know what he was oging to do with the cat, so we offered to keep him here. As I write this, he’s been here for about four hours, and he’s been kept in our spare bedroom. So far he hasn’t met Kira & Zathras.

The new guy has some of his toys from home, his food bowl, and all that. Obviously, he’s a bit afraid, but when I’ve gone in there to spend time with him, he seems happy, yet scared at the same time. So far I’ve caught him sleeping behind the pillows on the bed in there – probably because it’s hidden and out of the way. Every time I’m in there, Kira & Zathras are outside the door, either scratching at the door to try and get in, or doing other non verbal things to let me know they’re out there, and want to see the visitor whom they know has to be in there. They’ll probably get to meet our visitor tomorrow.

Zathras will probably be fine with it, but I suspect Kira will hiss at him. We’ll find out. :) Zathras & KIra are still being friendly with me when I’m not in the room, so they don’t seem too mad at me.

UPDATE THE NEXT DAY: Well, things are going good with our visitor cat (whose name is Rascal). He’s gotten over being here instead of his home. Whenever we go into his room to see him, he’s happy, head butts us, is purring, and loves playing. That’s great news!

The bad news is that our two cats got into the room when we were leaving it earlier in the day, and boy did it not go good. They ran in, and went “Holy Shit” – and just kind of stood there staring at Rascal, who stared back. Rascal broke the ice, and hissed at Kira & Zathras. Kira was closer, and he came up and sniffed Kira as she was looking at Zathras, who was in a corner. Anyway, Kira ran away, she left the room, and started growling from the hallway, the wimp she was.

Zathras however, was still frozen in a corner. He was in “full battle frizz” mode. His tail was all frizzed up, his pupils were fully dialated, and the fur on his back was also up. He was hissing, spitting, and growling. Boy was he unhappy, which totally flies against what we thought he’d do. Zathras was still frozen there, he never moved once he came in the room. I had to pick him up while still letting Rascal know what he thought of him and remove him. That did not go well.

Everyone calmed down, and later in the day, Zathras started hanging outside the door. At one point, Lynn was in Rascal’s room, and said that when Zathras was outside the door, Rascal was hissing at him through the door, kind of like saying “This is my room!” I tried once more in the evening to get them to get together, I carried Zathras into the room, and never let him down. He and Rascal were hissing, spitting, and basically acting badass towards each other.

I don’t think they’re going to be friends, unfortunately. 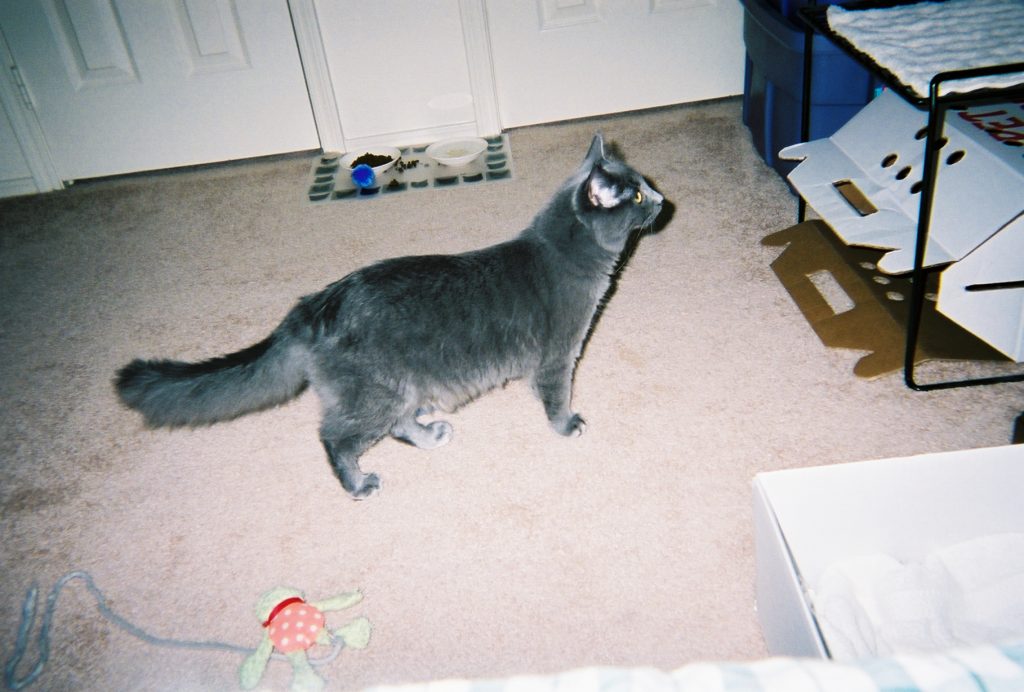