YOU DO NOT BELONG HERE

I was a game developer many a moon ago on a title called “Rise of the Triad“.  The original game I worked on came out in 1994/1995, and has developed a rather cult status over the years, and it’s being revived and re-released by Interceptor Entertainment later this month (check out their site for it).  I was chatting with one of the guys from Interceptor (Fred) about the game, and one of the oddities in one of the levels I did, called “The Vomitorium”.   It’s specifically regarding a wall texture that says “YOU DO NOT BELONG HERE”.   This short story is probably only of interest to hardcore Rise of the Triad fans.

Oh, go pre-order the revived game.  It’s only gonna be $15 on steam.  That’s just three bloody lattes at Starbucks!   Great value in this era of games being $60! 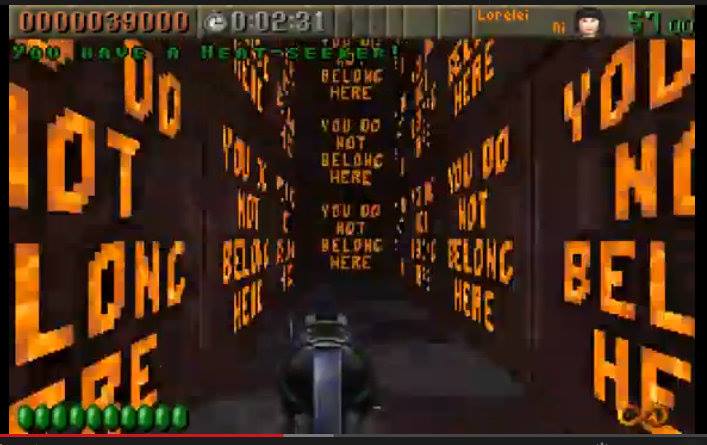 I had mentioned this story to Fred, and thought I’d pass it along. It’s a story as to why the “You Do Not Belong here” texture exists in the first place. And why it ended up in my Vomitorium level.

The editor that was used by the artists for the Wolf3D engine art had some issues if you got to the end of the string of tiles. If you tried to go past it, it would crash or some such shit. So Steve Hornback (lead artist I think) put that tile in there (it’s on both ends of the string of tiles, if I believe, technically in there twice), and the thinking was that if you saw it, you were supposed to stop scrolling, avoiding a possible crash. Memory was very precious back in those days, so loading up all those graphics in the DOS graphics editor was an issue.

Anyway, when I was making the original Vomitorium, I was of course looking for ways to make people sick. I discovered on a test level with the lo-res graphics that the tile shimmered if viewing it from far away. I asked one of the programmers if there was any technical reason why I could not use that tile, and would it crash the main game if I did? I was told no, it’s the same as every other tile in the art set, it only was there to act as a marker for those playing around with the graphics editor, not the game itself, so it was a viable tile. So I used it. You saw what I did with it.

I wonder if a whole room full of them in the new ROTT would have the same effect, because I believe most of what made that an effective thing was precisely the lo-res graphics. Viewed more clearly, I wonder if it would do the same thing.

A few years back, there was a fan named Maxime Tondreau who so loved Rise of the Triad, he did a video for each level of the game.  It was quite cool to watch thru that.   However, of course I liked the videos he did for my levels the best.   Here is the one for The Vomitorium.  Check out his review, it made me laugh many a time, because most of the things he complained about are things I intentionally tried to be a jerk about in my level design.  Mappers never get that kind of feedback from the public, so I loved it.

P.S.  Will there be a Vomitorium in ‪the new ROTT? You’ll just have to wait and see.  ;)