This is not a review of the movie. It’s a few remarks about what happened when I went to see the movie – you can read this if you haven’t seen the movie, I’m not talking about the events in the movie.

Well, I went to see the movie with the staff from my company. We’ve seen Episodes 1 & 2 as a company, so we saw this one too. It was pretty damn great. For the midnight showing, they let people in at about 9PM, which was more comfortable than standing around for hours. So, we’re watching the movie. It’s awesome. We’re getting very obviously towards the end. Then about 2:23AM, we got what you see in the capture from my cel phone below. BURNT FILM!

Yup. The film melted right towards a real critical part of the movie. It eventually got going again, but we missed some parts of it. Without going into what exactly happened (not fair for those of you reading this), there was between 5-10 mins left after the film started up again.
We did get a refund (voucher), but we missed a really critical part of the movie, and I was wondering in the last bit if it was going to happen again. It did get a little ugly, but not too bad – some people tried to run to the other theatre that was showing the movie at the same time – don’t know if they made it or not.Stupid “film” theatres. This is why I always go to DLP theatres. This kind of garbage doesn’t happen there. Not that I wasn’t going to see the film again anyway, but man was that really REALLY irritating. 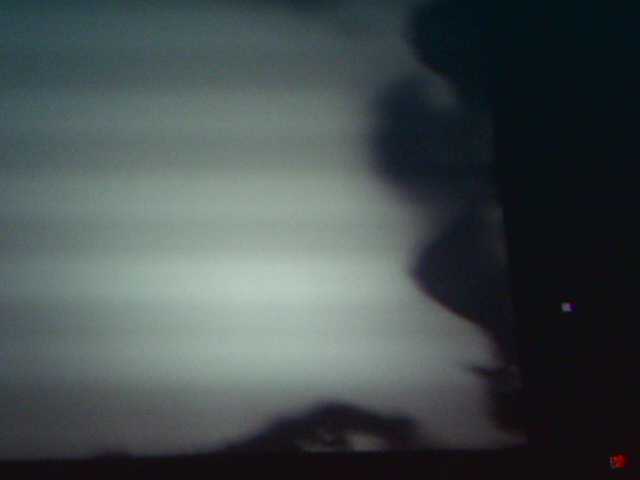