A bonus at the Dallas Stars Game

Last night I went to a Dallas Stars game. I normally only go to one or two a year, mostly because of the price of the tickets. Even with the (small) reduction in price since the NHL has come back from the strike, their tickets are still stupid expensive. Anyway, my mother bought me a 10 ticket voucher pack for the 2006 season of the Texas Rangers for Christmas. She ordered it early, and because of that, they gave you a voucher for a couple of free Dallas Stars tickets. I turned in the voucher for the game last night, and they were pretty good seats. They were Sec 326, Row A, Seats 1 & 2. It was the first row of the upper deck right at the blue line behind the visitor’s bench. Were pretty good seats, especially for free (they were valued at $65 each). Here’s the view from where I was sitting: 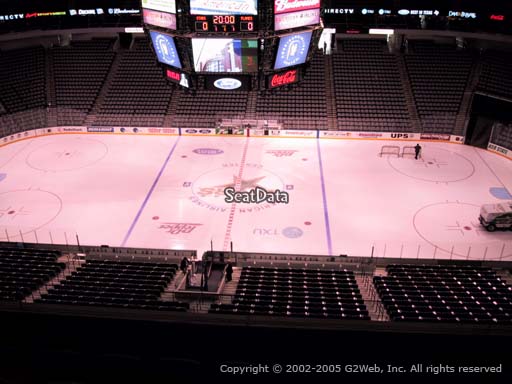 Anyway, in the first intermission, they started showing a bunch of promos and whatnot on the screen, and one of them was a request for people with cel phones in the arena to text message something to a specific phone number, and you’d be entered in a drawing for a prize. So I did it as a goof, not thinking anything of it, nothing ever happens. Well, in the second intermission the friend I was with went out to get a beer, and while he was away, I got another text message back from the place I sent the submission to. Figured it was a “If you want more information on our radio station (it was a station sponsoring this), send here”. That’s not what it was. It was a message saying “Congratulations, you’ve won the autographed jersey, please report to Guest Services behind Section 102”.

I had won an authentic Dallas Stars Jersey that was autographed by most of the team. From the looks of it, it’s not the entire team, but there’s a good number of players on there. It was incredibly cool. Anyway, I told the people sitting next to my friend where I was going, and took off for Section 102. After a few questions to prove who I was, they handed me the jersey you see in the picture below. They did give me a bag to put it in, which was probably a good idea. :)

I get back to my section, and my friend who was back at that point saw me with the bag and said “You did win the thing, didn’t you?” – he thought I was just goofing on him telling him I won that while I went off to the bathroom or something. I became a mini celebrity for a few minutes when all the people aruond me realized that I had won the jersey. The friend who went with me was annoyed, as he had entered the thing too, and they gave away just one of these for the entire arena, so I was pretty darned lucky to get it.

And the game itself was quite good, the Stars tying the game with less than 60 seconds in the third period, and then winning it in the shootout.

So thanks Mom – I had a great time at the game, and the jersey was extremely cool – I’ll probably get it framed and hang it on the wall. Here is a picture of it hanging on one of the racks that is in my office today.