I’m not the biggest college sports fan. I far prefer the pros. However, one can’t help but be enthralled by this game. It was a great game all around. One of the few that’s ever come close to it’s hype. #1 vs #2 ranking, both 12-0. Came down to the end of the game. I saw the first half of the game at a bowling alley, as it was league night for me. The two alleys next to mine were vacant, so the employees put the game on the overhead monitors for the unused lanes, that was cool. Whenever the Longhorns did something, the entire house pretty much erupted. It was a great feeling.

Even the Major League Baseball Site got into it with an article about the game, also speculating on the possibility of a Rangers / Astros World Series. :)

Saw the fourth quarter at home, and wow, what a finish. Congrats, and what a performance by Vince Young. 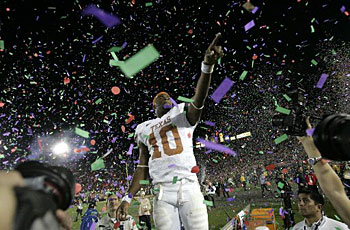