The Original Star Trek to get an Upgrade 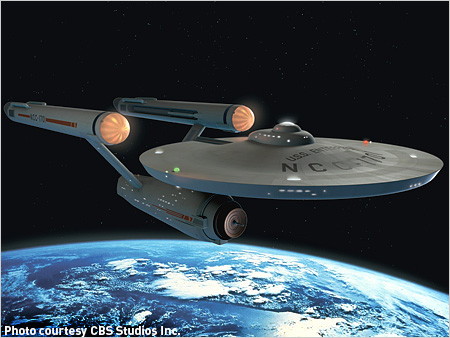 I’ve been a fan of Star Trek for a long long time. My family legend goes that my father used to put me in the playpen once a week when he watched Star Trek & Wild Wild West when Trek was new in 1966. Subconciously I attribute my love of Sci-Fi to that. :) I grew up in the 70’s with just those episodes of Star Trek (no TNG, DS9, VOY, ENT or movies). So I know them very well. As much as I’ve loved the original Star Trek, the one thing it’s lacked is good special effects. It’s not like the stuff in there is horrible. It’s certainly more than acceptable, but it’s in terms of general sfx quality, it’s nothing like what you can get today. Heck, I bought all three season series of TOS, so I’m not adverse to them.
So when I heard recently that Paramount was planning on redoing all the special effects for all 79 episodes of the Original Star Trek, I had a bit of trepidation. A lot of Sci-Fi fans have been burned by the changes that George Lucas has made to Star Wars, and while I’m not really one of them, the story changes that Lucas made (not so much the sfx) I’m sure weigh heavily on people’s minds. But after reading a bit about this upgrade, here’s a few bullet points I’ve found:

Something I can not get a handle on is whether these episodes will only be available for broadcast viewing on High Def channels, or if it will be available as well on standard def TV stations, too. I’ve read some remarks about it being available to a bunch of channels that currently syndicate, but I’m unclear as to whether it will only be on their HD alternate channels or not. If it’s HD only, then I won’t be able to see it, as I don’t have HD yet.
I’m actually looking forward to it, and it will defintely make me rewatch all 79 episodes to see what they’ve done with it. This particular quote by Mike Okuda makes me feel good about this.. “We’re taking great pains to respect the integrity and style of the original. Our goal is to always ask ourselves: What would Roddenberry have done with today’s technology?”
One thing that’s impressive about all this is the secrecy around the project. You don’t do that amount of work (79 episodes at 51 minutes an episode) in a month. It has to have been worked on for some time now. The fact that this news is just breaking this week, about two or so weeks before it starts to air is quite impressive in this age of Internet news. Guess all that work that the Star Trek folks did on the Enterprise episodes In A Mirror Darkly wasn’t just for those two episodes, eh?
Makes me wonder what two of my favorite TOS series episodes will look like. These two are The Doomsday Machine & The Immunity Syndrome. Both feature tons of external ship shots, with Doomsday having another Constitution Class ship, and Immunity with a giant living amoeba – this oughta be cool.
This isn’t the first time that upgraded SFX have happened for the original Star Trek, but it is the first time they’ve received a complete CGI replacement and upgrade. About 7 or 8 years ago (I forget exactly when at the moment), the Sci-Fi channel ran the original Star Trek in a 90 minute timeslot and had introductions by William Shatner & Leonard Nimoy. Those versions had cleanup done to them. Nothing new/changed, just cleanup, like some grain removal from the film, the square boxes around some of the ship sfx were removed. These cleaned up versions were also released on DVD within the last year or so, if I’m not mistaken. Then on the Internet a few fan produced attempts at showing what could be done with updated special effects were done. The first one was here. The second one was here. The second one had some seriously good upgrades, and is definitely worth watching. However, both of these updates are unrelated to this new official sfx upgrade. But damn. The second one is very impressive for a fan production. If the official stuff is integrated as well as this was, it’s going to look great.
Here’s a few news stories I’ve been reading about all this at. Check ’em out for further detail.

A final note.. My wife has never liked the original Star Trek. Her usual stated reason is because of the crappy sfx. I wonder if this will get her to watch the original now. :)
UPDATE: Something else I thought of. These episodes are 51 minutes long. If it’s syndicated, and it’s in an hour time slot, here we go with the choppy episodes again, as current TV shows are about 41-42 minutes. I know G4 is running them in a timeslot that’s 1:10, and has the uncut versions. I would HOPE that the remastering work done on these thigns is for the full 51 minute episodes, not some syndicated 42 minute version. Anyone in the know know anything about this issue?
UPDATE #2: It appears that these syndicated versions are edited. According to this link which I was shown, they are 43:48, although the 51 minute original is mentioned. That gives me hope that this sfx cleanup was done on the full version, and not just a 43 minute syndicated version. Hope to find out more on that.
UPDATE #3 @ 12:30AM 8/1: There’s more info online at this link which has plenty of detail, as well as some answers to things I posed above. This link shows some potential speed bumps in the overall project, but I’m going to wait and see what these look like before criticizing them.
Still am excited.