I’ve been playing a lot of Animal Crossing: City Folk lately. I was hooked on this game in the last iteration on game consoles (that being the Gamecube version). This new one is mostly the same, and that’s a disappointment, but there’s enough small stuff changed that it doesn’t feel 100% like the old version. Anyway, I’ve been visiting a lot of people’s towns now. That’s one of the new things, you can visit people’s towns via WiFi and play on their consoles.

That’s cool, as it helps ratchet up one’s stock of foreign fruit. The town you play in comes with its own “native fruit”. That’s the kind that grows wild in your town. For me, that’s Apples. There’s about half a dozen different fruits the game can have. The others are oranges, pears, cherries, coconuts, and one or two others I can’t recall right now. There is a lesser known feature in the game, called a “money tree”. Anyway, I mentioned to a few people whose towns I was visiting about the concept of money trees. I wrote this big email to one of them, and decided to post it here in case anyone else wants to know about this.

In Animal Crossing, you dig things up from the ground (or bury) with a shovel you get at the local game merchant’s store (that would be Tom Nook). Anyway, as you progress in the game, the various objects have “gold” versions, which are snazzier than the standard ones. They look somewhat cooler, but they have better functions. For example, the gold slingshot will shoot three pellets instead of the one the standard one does. 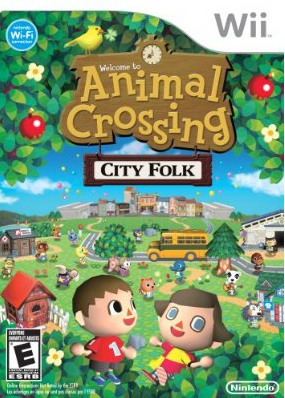 First off, you have to have a golden shovel to do this. If you try it with a regular or silver shovel, it won’t work. You get one of those by burying a regular shovel in the ground, and after four days, dig it up and it will be gold. If you dig it up too soon, it will get the timer restarted, and have to do it again. So keep it buried until the time is ready.

The catch here is this. And this goes for any kind of tree, not just money. If you want to GUARANTEE the tree will grow, you need to cut down an existing tree and replant in the same spot, but BEFORE closing over the hole once you’ve dug up the stump. If you do that, it resets the hole, and you’ve lost that. This is particularly annoying if you try planting in a new spot with money, and the tree withers, you’ve then lost that money. Your best best for planting money trees is to cut down an existing tree, and plant in that same spot. Additionally, a money tree doesn’t regrow money once you’ve harvested it. After that, you need to cut it down and replant with fruit, as a single spot will grow money just once.

I only experiment with new tree locations with my town’s native fruit, since there’s a bunch of it, and you’re not out a lot of it fails.

The max money tree you can plant is between 99,000 and 100,000 bells. That’s because you can’t hold more money than that at once, and you can only plant one bag at a time, so the max output for a single tree in one harvest is between 270,000 and 300,000 bells depending on the size of the bag buried. The tree will continue to bear fruit after you harvest it, so once you get a lot of these in your town, it’s best to harvest them before letting others in via your open door. Otherwise they can swipe your money. I haven’t timed it, but money trees usually take a little longer to grow than standard fruit tree (or just a plain sapling).

The money for the tree can come from anywhere, it doesn’t matter what – I just sell off tons of stuff until I’m carrying 100k in bells, then bury it. It helps to raid other towns for their non native fruit. This whole thing goes faster once you have a town full of non native fruit yourself.
This effectively breaks the money system and lets you pay off all the mortgages in pretty quick fashion once you get a couple of 300,000 bell trees going. Plus you can buy all the expensive crap in the city. :)

In fact, that’s the whole reason I did this, as my three year old plays with me, and I wanted to outfit my room with the entire princess line of stuff that the game will start selling in the ritzy town store in April. A bed there costs 300,000 bells, it’ll take a few million to get everything, so I will need a boatload of cash for all that. :)

The picture on this page is me and my golden shovel standing in front of a money tree after it ripens (takes about a week after planting). That’s 90,000 bells you’re looking at. I planted a bag of 30,000 bells.