Getting rid of Stinky Milk

For some reason, as I’ve gotten older, handy household tips like this have drawn my attention.  I posted one myself about two months ago about using old candle wax as an air freshener.  My wife also had a good one about mildly reducing heat by putting a tea kettle over an oven burner after you’ve been using it to reduce the amount of heat (or increase depending on the season) put off into the room. 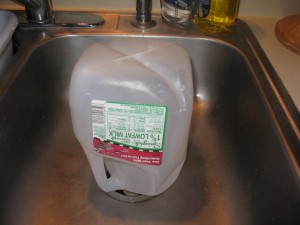 However, today I’m talking about stinky milk.  This comes into play if your house recycles.  I suppose it could still be useful if you throw out your plastic, but I don’t see it as a big a deal as that.  With four people in the household, including two kids, we go through a decent amount of milk.  Not an obscene amount, but we consume our share.  Anyway, when the gallon jugs are empty, most recyclers will crush the plastic and put it in the recycle bin.  However, living in Texas, and especially in the summer, I’ve found that they end up smelling out in the recycle bin.  That’s generally because there’s always a small trace amount of milk left over in the bottom, and that stuff cooks out in the heat.  It’s not so bad if you had your bins outside, I imagine, but with wind and whatnot, you don’t want your recyclables blowing all over the place, so it’s in the garage.

Some time ago I had this idea which you can see in the picture in this post.  What I do when the milk is empty is I’ll give it a quick rinse with some water from the faucet, and then turn the jug upside down in the sink overnight.  This generally gets everything liquid out of the jug via gravity, and it goes down the drain.  Then the next morning, you crush it up and put it in the recycle bin.  If there’s anything in there at all, it’s a few drops of water, and that will evaporate in two seconds in the summer in a garage in Texas.

I’ve found this helps enormously with the recycle bin not smelling when you get to the end of the two week cycle.  Stupid little hint here, but it seems to work for me!   :)