UPDATE Apr 10: I got a reponse from Amazon in reply to this blog post.  See the bottom of the post for that update.

If you buy a lot from Amazon.com you get to learn their system and how certain things work.   My first order of any kind with Amazon.com was on June 24, 1997.  It as for this book.  I’ve ordered a lot since then.  All kinds of things.  Clothes, food, electronics, media, both physical and digital, both of my HDTV’s…  You name it, I probably bought it from there.  To that, I’ve learned a lot about their system and how they ship, warehouses, location tracking, etc.  Now I don’t claim to know everything, but I know Amazon.com fairly well.

Which is why today I ran into a scenario that was quite puzzling, and one I didn’t know the answer for, couldn’t find an answer for in their help area, and as far as I know has no answer.  That’s why I’m writing here, to see first if anyone knows anything about it, and second (if not), to try and draw some attention to it.

Amazon has a cool feature regarding printers and printer ink – they have a special section for it, and they call it the “Ink & Toner Finder“.   If you tell Amazon.com what printers you have, then they will remember that, and tell you what ink is compatible with your printer(s).   Anyway, they remember the printers you either bought from them, or told them you have.   When you search for toner, you’ll get told whether or not it’s compatible with your printer.  Here, take a look at this: 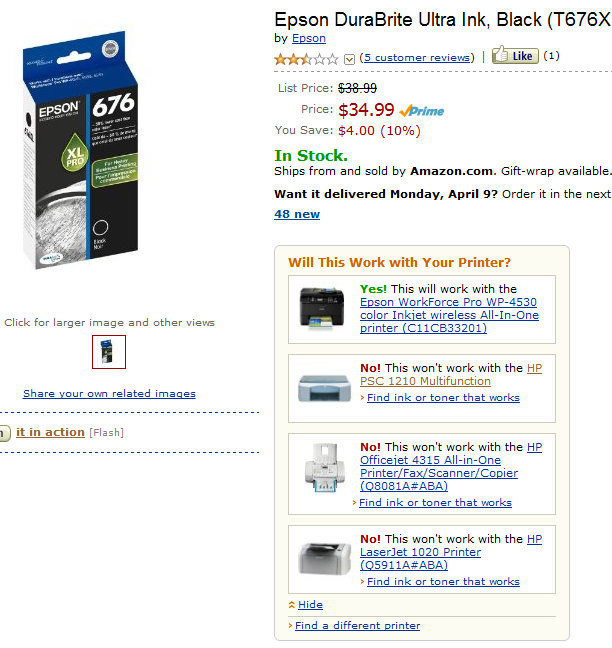 I was looking for ink for my Epson printer, and it correctly identified that the ink works with that printer.  It also takes the time to tell me that it doesn’t work with the other three printers on my account.   Thing is, I don’t own two of them anymore.  The 1210 & the 4315 are printers that I never actually OWNED, I borrowed them from someone for a time.   That is the entire reason for this blog post.

There is no way to edit this list of printers!  I’ve had a good look through my account info, there’s nothing in the help area about it.  So I googled around a bit for it – looked for the phrase “Will This Work with Your Printer?” in one try.  There appears to be no way to address this issue.   So I wrote Amazon.com’s customer service and asked them about it.  Their guy didn’t know, either.  In fact, this was the first truly awful customer service experience I’ve had with Amazon.com in the 15 years or so that I’ve been ordering from them, but I’ll get to that in a minute.

I’m truly puzzled that there is no way to edit this list of printers, two of which I never owned in the first place.  If anyone reading this knows of a way, please let me know.  I don’t think there’s an answer out there, but if I find one, I’ll update.

One thing Amazon.com has always been good at is customer service.  I’ve emailed them for customer service issues countless times in the past.  So this time was no different.  I emailed them and asked basically, “how do I change that list of printers”?   This was about 10AM or so in the morning.  Around 5PM, I was taking a nap, as I was up super early (3:30AM) this morning, and was woken up by the phone ringing.  It was Amazon.com customer service calling me about the printer issue.  The guy on the other end of the phone was bloody clueless.  He appeared to have no idea what the heck I was talking about, despite my having explained it in the email I sent to them originally.   I got so frustrated with this guy that I said “Ughhhh… I have to go, I’ll deal with this later”.  The real reason was that I was thinking “Look, you idiot – I already explained this in my email, why do I have to repeat the contents of my email three times, and you still don’t get it?”  Hung up on the dude.  I then found out after my head was clear (as he did wake me up) that he called my house THREE times, and my cel phone TWICE.   Dude – WHY?  Why are you calling me that many times for an email query?  I didn’t ask to be called, I didn’t want to be called.  You reply to an email customer service query with an email – unless said customer asks for the phone call – which I did NOT.   This guy annoyed the heck out of me – and is the first time I’d give a completely unsatisfactory CS report on Amazon.com in 15 years.  Congratulations Mr. Incompetent Customer Service Agent.

As an amusing ending to this – in 100% of the times I’ve contacted customer service in the past, I get an email a short time later asking me to rate my custmer service experience.  I have not gotten one for this.  Gee, I wonder why.

After I wrote this post four days previous, I was still frustrated, and didn’t feel like going through the general customer service contact methods again.  I took a wild stab in the dark, and Emailed Jeff Bezos (Amazon Founder/CEO) directly and pointed him to this blog post.  Now I’m no fool.  I know he doesn’t directly read these things (he might sample some), as a company CEO acct would get too many emails for the actual CEO to read them regularly.  Still, I figured someone would be paid to read them, and I might have a shot of it actually getting dealt with.  Turns out that is the case, as today I received this email from them.

I’m Jonathan Norberg of Amazon.com’s Executive Customer Relations. Jeff Bezos received your email and asked me to respond on his behalf.  I’m sorry to hear about the inconvenience you experienced. I’ve conferred with the team that created the Ink & Toner Finder, and I’ve been informed it works off the same database as the Amazon Recommendations. In other words, since these items were marked as items you owned in the recommendations tool, they were listed in the Ink & Toner Finder as well. (It’s also possible that at one point you entered them in the Ink & Toner Finder and they were added in the recommendations as well.) I’ve removed the two printers you mentioned, and I can confirm it took care of the issue.  If you’d like to read more about how to improve recommendations in the future, you may want to check out the following link:  http://www.amazon.com/help/recommendations –  In the meantime, we’re looking at ways we can improve this experience for our customers, and we appreciate you taking the time to write to us about this. Please let me know if I can be of further assistance.

I can confirm that they indeed took out the two printers from my account that I didn’t want there.  That part was cool.  It wasn’t obvious how to remove printers from that list.  What WOULD be helpful there is at the bottom of the box of printers that pops up is a simple link that says “Edit this list”, and send me over to where I need to go to manipulate that list.   Even after reading what they told me, it’s not obvious how to remove a printer from the list.   For now it’s a non issue, since they removed the printers from that which I didn’t want there.  But if I get rid of one of the two in the future, I’ll probably be confused again unless they update the tool between now and then.

What I would have liked though was them addressing the issue of the customer service agent calling me five times in the span of 10 minutes when they were never asked to call me.    That part was unresolved/unremarked – I was more irritated at THAT than their ability to fix the printer issue, to be honest.

Still, they did take care of the original reason all of this got started, that’s a good thing.