As Doctor Who approaches it’s 50th anniversary next year, BBC America has put out the call for people to write their “New to Who” stories – basically what got you into the show originally.   Given BBC America is running just the modern show, I suspect the majority of the people’s responses will be about the revived series.  Hope to see some classic series stuff in there.  Decided to write mine, but there’s zero chance it will fit on Twitter, so it’s here. 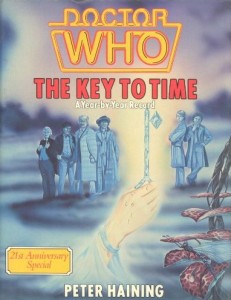 Back when I was in High School in Philadelphia (1979-1983), I used to hang out at a friend’s house on the next street over a lot.  Given the time, we used to play a LOT of Atari 2600 games.  I bring that up, because his mother used to be into Doctor Who.  I never ever stopped and watched, because I wasn’t interested in hanging out with my buddy’s mom at all, so I have no idea what stories those were (but for some reason Seeds of Doom comes to mind).  However, on occasion, I’d stop and watch the title sequence to Doctor Who on the way back to the videogame area.  From what I remember, it was mostly Jon Pertwee & Tom Baker, because in the early 80’s, that’s all we’d get in the US.  Hartnell & Troughton didn’t start over here till 1986 (on NJN), and while I think Davison was over here, most PBS stations at the time ran them in order.  Started at Spearhead, ran through what was out there, and then recycled back to Spearhead.  If there was something new, it’d get tacked onto the end for when they’d get through the cycle again.   But given the time I usually got there after school, Doctor Who would be starting, and I always got a kick out of the theme song, so I’d watch that, and then head upstairs.  Never watched the show.

After I graduated High School (in Jun 1983), I stopped hanging out with this friend, and later on in the year, I recalled the Doctor Who thing.   I have a vague memory of an announcement by my local PBS station about an anniversary special coming up, as this was the 20th anniversary.  So I decided to watch the anniversary show as my “first episode”. Watched it by myself, cold – no “mentor”.  That’s right – my FIRST Doctor Who story was the Five Doctors.  Quite confusing as heck for a first timer, but that’s where I got onboard.  It was a strange story as your first, since it had a ton of characters, and your enjoyment of the story was based mostly around what you might have recalled about these characters from their past appearances.  Not so much the story in front of you, as it was just there to serve all the cameos, for the most part.   But I did enjoy the confusion of all that, so I decided to look into the show’s past.

Given there was no World Wide Web in late 1983 that I could use, you had to go to the physical library to look things up.  In late 1983 in Philadelphia, there wasn’t a ton of books out there on Doctor Who – so it was slim pickings.  That’s why the Peter Haining books were such a godsend back in those days – especially to this new fan.   I LOVED those books, because they were my main source of researching and reading the past.  When the show came back in 2005, there was a book that came out (and then got one update), and I have to say, it really reminded me of the old 80’s Haining books.  It was called “Doctor Who: The Legend” by Justin Richards.  That had a great feel for me back to a time when I was “New to Who”.

I pretty voraciously consumed what I could find back then in terms of available stories.  That’s why I loved the old Creation Conventions so much.  Back in those days, it would take upwards of TWO YEARS for any new Doctor Who stories to make it onto one of the three PBS stations I could get in Philadelphia.   They’d usually bring a new story or two with them to a convention, so you’d watch it there.   There wasn’t pirate video on the Internet like there is today, but I was one of the guys who used to import PAL videotapes from England, and have them converted to NTSC format, so you could watch them in the US earlier than PBS would show them.  Took those tapes to several Doctor Who fan club meetings, where everyone would watch them.  It was far more enjoyable when a “new story viewing” was a communal experience like those were.   If you were a person who was into Doctor Who like this back in the 80’s, then you MUST MUST MUST seek out the extra on the Revenge of the Cybermen DVD called “Cheques Lies & Videotape”.  It’s all about being a fan back then, and  it talks about importing videotapes from other countries – it’s simply a MUST SEE if you were a US Doctor Who fan back in the early mid 80’s.

I dated a couple of girls in the 80’s around/after high school who were into Doctor Who.  My eventual wife also got tortured by my 1980’s Doctor Who obsession back in the day, but she put up with it, she didn’t actively enjoy it.  Although, she does thoroughly enjoy the revived show.  She will run screaming from the living room if I put on the 60’s stuff, however.   Doctor Who remains to this day my all time favorite TV show (The second was Dallas, which also relaunched itself in 2012).   I don’t recall ever being frightened by it truly, but that’s because I started watching it when I was about 18.  I’m 47 now, so I’ve been with the show for awhile.  I was pained when it ended in 1989.  Teased in 1996 when it almost came back, and was quite ecstatic when it returned for good in 2005.

Current TV show head writer and producer Stephen Moffatt relayed his introduction to Doctor Who, and I rather enjoyed his story.  Check it out: