UPDATE 2 JUN 23: I got reinstated.  Need to write about that, but in short, it took them 15 days to respond to my original appeal request.  Sigh.

Last Monday the 8th I was watching the Apple Press conference, and like most people interested in that they were hanging out on social media.  I was chatting with a few people talking about Apple Music, and inquring about how the existing iTunes Match and iTunes radio services would exist.  Plus the usual goofy kinds of tweets I send out, retweets of news stories, etc.  Nothing out of the ordinary.

Then around 6PM or so I noticed that nothing new was coming into my news feed on Tweetdeck.   So I went to Twitter’s front end, and saw this:

It’s entirely possible it’s a mistake, but what concerns me more about the suspension is that it’s entire possible I’m suspended due to someone or group of people who have decided they don’t like me.  From what I can gather, if someone or a group of people gangs up on you and falsely reports you, it can get you suspended, when you’ve done absolutely nothing wrong.  That’s infuriating – that there’s no intermediary, it’s all automated.

Now, I know people who have done things wrong say “but I didn’t do anything wrong”, and you go “yeah, yeah, yeah, right – what did you do?”  In this case, honestly, nothing.   I work in social media.  My LIVELIHOOD is on Facebook, Twitter, and the like.  So I’m WELL VERSED in the rules and concepts of what you are supposed to do and what you’re not supposed to do online.

There are so many people who post things that are CLEAR violations of the Twitter rules (up to and including outright pornography), that are still going which makes my suspension all the more galling.  I’m a social media pro, and they suspended me.  Which brings me to the most ANNOYING part of the problem.

So why am I suspended?  I wish I could tell you.  I have no idea.   There was no email notification telling me that I was suspended, much less WHY.   From reading around on the subject, depending on what the acct is suspended for, you might get a notification like this (I pulled this from another blog entry about being suspended from Twitter): 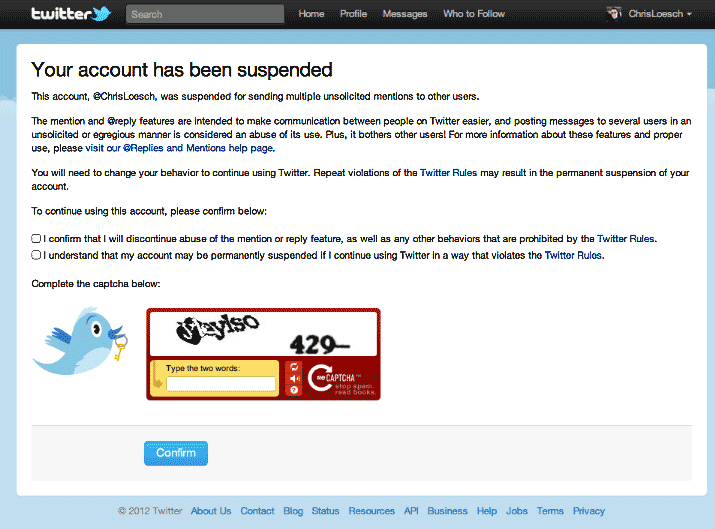 I didn’t get anything like that.  All I got was the image I posted above about it being suspended.    A subsequent robot email I got later gave no detail.  In fact, to the writing of this blog I have no idea why I’m suspended.  There’s ZERO INFORMATION.   You remember that big black monolith from the movie 2001: A Space Odyssey?  This is what it feels like.   You’re standing there, going “TELL ME SOMETHING”, and the black monolith just stares at you.  You get nothing from it.  I’m at a total loss to explain why I’m suspended.

So OK, how do I get unsuspended?  Well, their system has a link you go to when you’re logged into your suspended account.  That link will give you a form to fill out some basic information, including your phone number, full name, and a place to explain why you don’t think you should be suspended.

I did that within 60 minutes of me finding out I was suspended.  I sent in the request on Monday evening around 7PM-ish.   Almost immediately after that, I got their robot response, which said this: 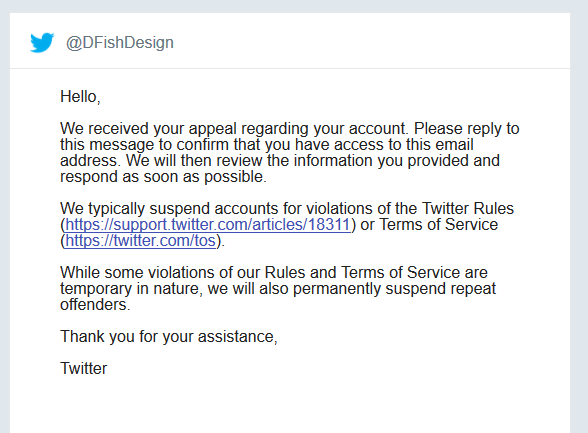 I cut the bottom off, as it has ticket information, which I don’t want out there in the public like this.  But otherwise, this was the full content of their email to me.   So OK, I did what it said, and replied back, saying this:

I am replying to your your auto message about my suspended Twitter account at twitter.com/dfishdesign.  As I said in the email, I have no idea what I would have done to generate this.  I work in social media, and as such am well aware of rules and whatnot.  I have about 7 or 8 different twitter accounts I maintain for several clients I do work for connected through my main Twitter account through Tweetdeck. I’m totally in the dark as to why I’ve been suspended.  If I had some real info as to why, I could try and figure out what happened, but your message saying I was suspended gave no information as to what the problem was.

I then re-read the rules again, and replied to their robot email a second time, saying this:

I would also like to add that I had another look over the list of possibilities, and I’m hopeful this a possible acct compromise, or someone falsely reporting me, as I’m at a loss as to what I might have done here.

… and then I waited.  And waited.  And waited.  In reading around about these things, I’ve seen where some people say it’s restored in less than a day.  I’ve seen where people say it takes 2 days, and some at 5.  Well, five days for me was Saturday.  My wife will tell you, I was stressing about this, and I don’t need that in my life right now.  I know I probably shouldn’t stress about it, but to someone who is a social media pro, this is particularly galling.    So on Saturday I filled out a second ticket, this time adding a lot more detail in my response to them. Got a robot response from that one, and replied to it as well.

So it’s late Monday night, seven full days since the original suspension, and my first ticket filing.  I filed a second ticket after five days.  However, I read something tonight which tells me that Twitter will delete your first ticket if you file more than one of them, and put the new one in the back of the line.  I don’t know how TRUE that is, because like everything else involved with this procedure, it’s a big old black hole of information.

That’s the single most frustrating part of this.  Not knowing.  In reading about suspensions, Twitter used to keep track of what they were doing in a web tool I’m familiar with called Zendesk.  It’s a tool that lots of companies use to do customer support.  You used to be able to look up your Twitter tickets on Zendesk to see if they were still being worked on, or they closed it without response, which is effectively “go away”.  If I could at least see that they’ve got it open, then I could relax a little about it.  But at this point, I don’t know if they’re just swamped, or they’ve looked at my request, and said “no”, and not told me that, in which case I’m waiting around for no reason.

I can log into my account now, and I can still see all my content.  Nobody else can, but I can.  I’ve read where if they unsuspend you, you get all your followers and whatnot back in a couple of hours after you’re turned back on.  So I’m hopeful this is a temporary thing.  But this is a LONNNNG “temporary”.

I do have two factor authentication on this account, and I do have a REAL password on here (it’s not this, but it looks like this: Ceknfn9!neSKwEUD59tUF942ybmx9GrB).  So yeah, they’re not guessing that.  I’m hopeful it’s something as simple as someone tried to break into my account, and failed due to TFA and passwords, and due to excessive failures, it gets locked out.  I’m also hopeful it’s a mistake on Twitter’s part.

But I need to get them to respond.  If by some bizarre miracle, someone from Twitter actually reads this, please go look up my tickets and respond, and let me know why I’ve been suspended.  Heck, if it turns out they think I’ve violated some rule I can’t figure out in their list, at least tell me that, so I can address the problem!

I also found this link, which has some good suggestions about what to do regarding one’s behaviour if you’ve been suspended.

UPDATE 6/19:  I found this blog entry tonight.  I wonder if this procedure is the reason.  What bugs me the most now is the total lack of communication.  If someone falsely reported me, I’ve been nuked for a bogus reason, and they aren’t responding at all to my appeals.  :( 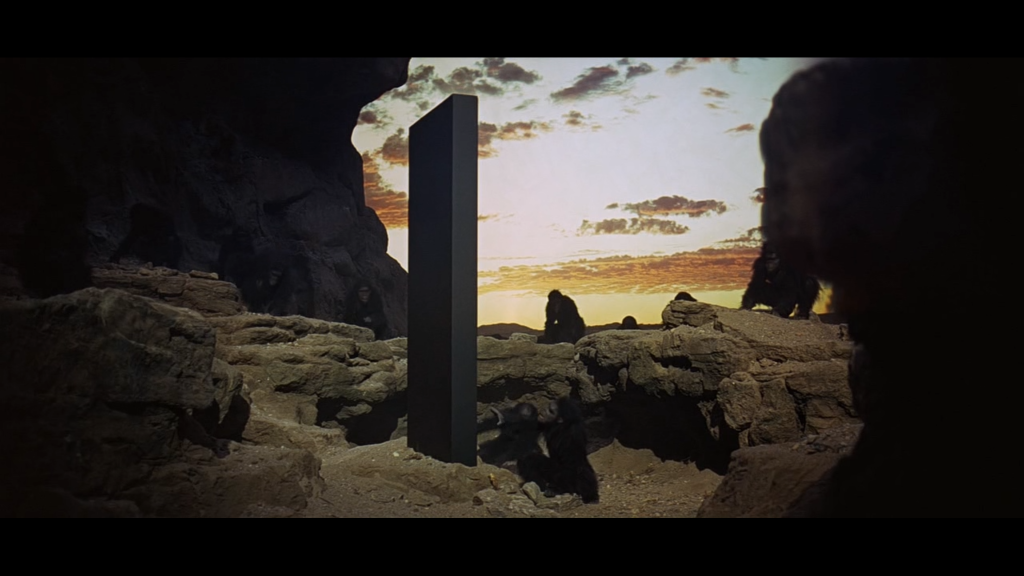