Back in 2010, I lost my job, and was unemployed for longer than I cared to be.  During the belt tightening that always happens during times like that, I canceled Cable TV.  I wrote about that elsewhere on this blog, so I won’t get into that in this particular post.  As time passed, I saw a new service starting, Sling TV.  I happily signed up with them almost immediately after they opened.   But in 2018 I’m with Youtube TV (I’m still with them in Spring 2020).  Here’s why.

First off, I was a Sling TV subscriber since almost Day 1.  They were the first (well, I believe the first big player anyway) to market, so I was onboard there.  I really wanted to see the return of some cable channels I hadn’t had for years at this point.

So I was with Sling for a long time, I was using what is now called Sling Blue.  It let me watch Fox Sports Southwest, and see Texas Rangers games, which being in Dallas was a major deal.   Because I was a near Day 1 subscriber, I had a grandfathered $20 price point.  Originally I got the service SOLELY for Texas Rangers games, but then found other channels on there I liked.  Went that way for some time, and was pretty happy with it.  I even got in on their DVR beta, and as such I had a grandfathered free DVR discount too – so I had a double discount with Sling.

However, over time, I grew more irritated, because the one channel I wanted more than any other wasn’t there.  That was MLB Network.  I kept asking, they kept “putting it on the list”, but nothing ever happened.

So I started looking around at other providers.   The traditional places were not an option. I cut cable in 2010 when I was unemployed, I was NOT going back. That ruled out people like DirecTV, Dish, or Cable TV.

OK, so I started looking elsewhere.

I briefly looked at Playstation Vue, but canceled before my free trial ran out.   The primary reason for that was price.  To get all the channels I wanted, I needed their $55 a month plan.  Bye.  Too much.

Somewhere around this time, I tried out DirecTV NOW, as they were just launching.  They had a program where you could get their $60 a month package for $35 a month if you signed up with them at launch.  I did that.  They had MLB Network, so I was happy there.  However, the inability to time shift anything (they had no DVR at that point) made them really not useful.  I’ve been a TiVo customer since 2000, and forcing me to watch things when they’re ACTUALLY on are a problem.  So no, they got cancelled.   Back to Sling TV.

Somewhere around here I tried Hulu Plus (in beta).  They were OK, but they didn’t offer anything compelling to get me to switch to them, so the trial was it with them.   Plus they had one major problem – the same one that Sling had.  No MLB Network.  If you have no MLB Network, then forget it.  Not going there.

I’ve lost track of the timeframe here, but we’re into 2018, and earlier in the year I successfully lobbied DirecTV to give me back the $35 grandfathered price point even though I canceled their service and gave up that price.  They did, and then I was back on DirecTV NOW again with the great $35 price.   The reason I did this is because they had a DVR service in beta finally.  For the first month, I didn’t have access to that, but I did get access after a month.  I was so looking forward to this, as they had MLB Network, plus they were adding a DVR.   I was excited.  Great package – great price, with the #1 channel I wanted plus a DVR.

Except they totally and utterly screwed the pooch.  Their DVR is a mess.  It’s total crap.  I was shocked at how bad it was.  Now I get it was beta, and things improve, but it didn’t improve at ALL during the time I spent with it (about three months).   I won’t get into the specific technical details, but the one most heinous problem is the fact that the skim through DVR feature that any DVR has was broken.  You’d slide forward to a point in a recording, and it would push you back to the start.  Basically you could record stuff, but you had to watch it all in one go without any kind of fast forward or anything.

Oh my god.  This was SO bad – I mean *SO AWFUL* that I knew I wouldn’t stay.  I hoped though – I kept the account going for a bit on the hopes they’d improve their DVR, but I wasn’t expecting anything.  I kept looking.

Came to Youtube TV.  Now I wasn’t sure why I didn’t try them sooner, but they were the last of the major players I hadn’t tried.  Should have tried them first.  Basically, I ended up loving Youtube TV so much, I went and canceled both Sling TV & DirecTV NOW, which I was still hanging onto.   I hated giving up my double grandfathered price with Sling, but Youtube TV was so far superior in every respect, I had no problem with that.

Here’s the bullet points as to why I like this. 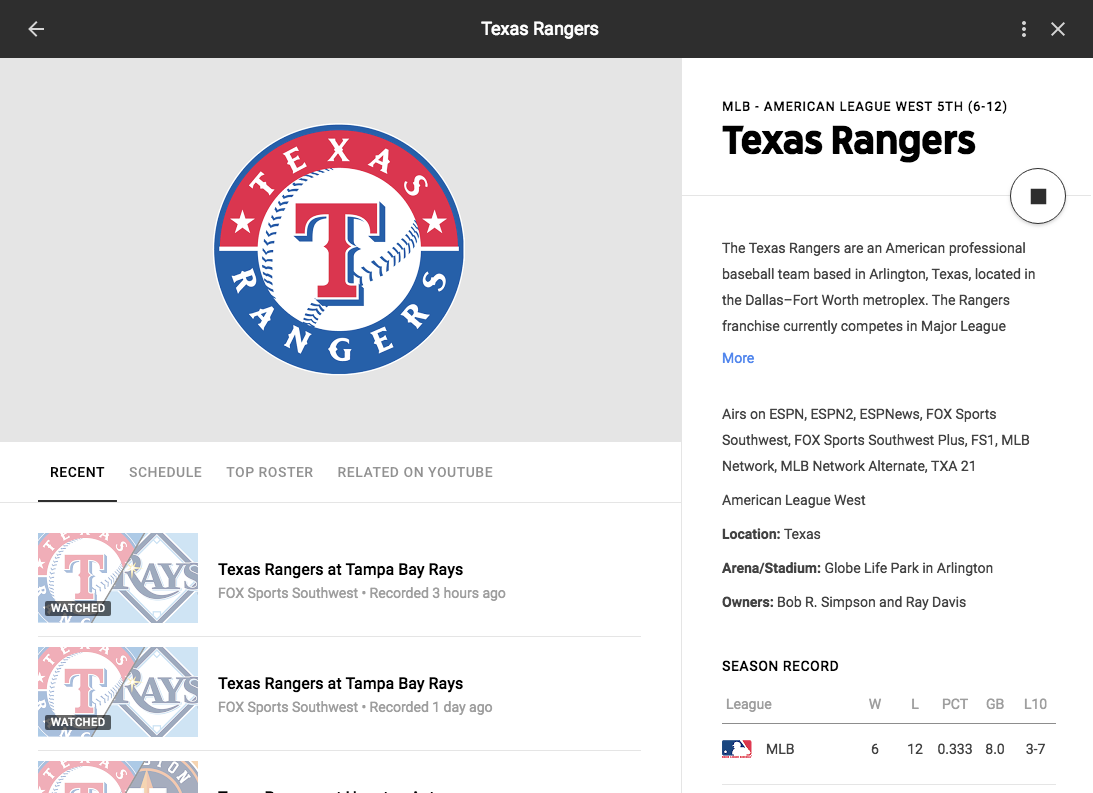 One other thing about sports – you can tell the service to not tell you the scores of games, so they won’t be spoiled on you.  That’s a nice thing.

Their DVR does work a little differently than others.  It took some getting used to, but now that I’m onboard, I really like this.  With most other DVR’s (either streaming or physical like a TiVo) you record a show, and you have conditions like “New only” or “repeats”.  Not here.  You add a show to your library, and it records EVERYTHING.  All episodes, all repeats, everything.    You can do stuff like that when there’s no limits on the DVR.

Here’s a capture of what the Library looks like: 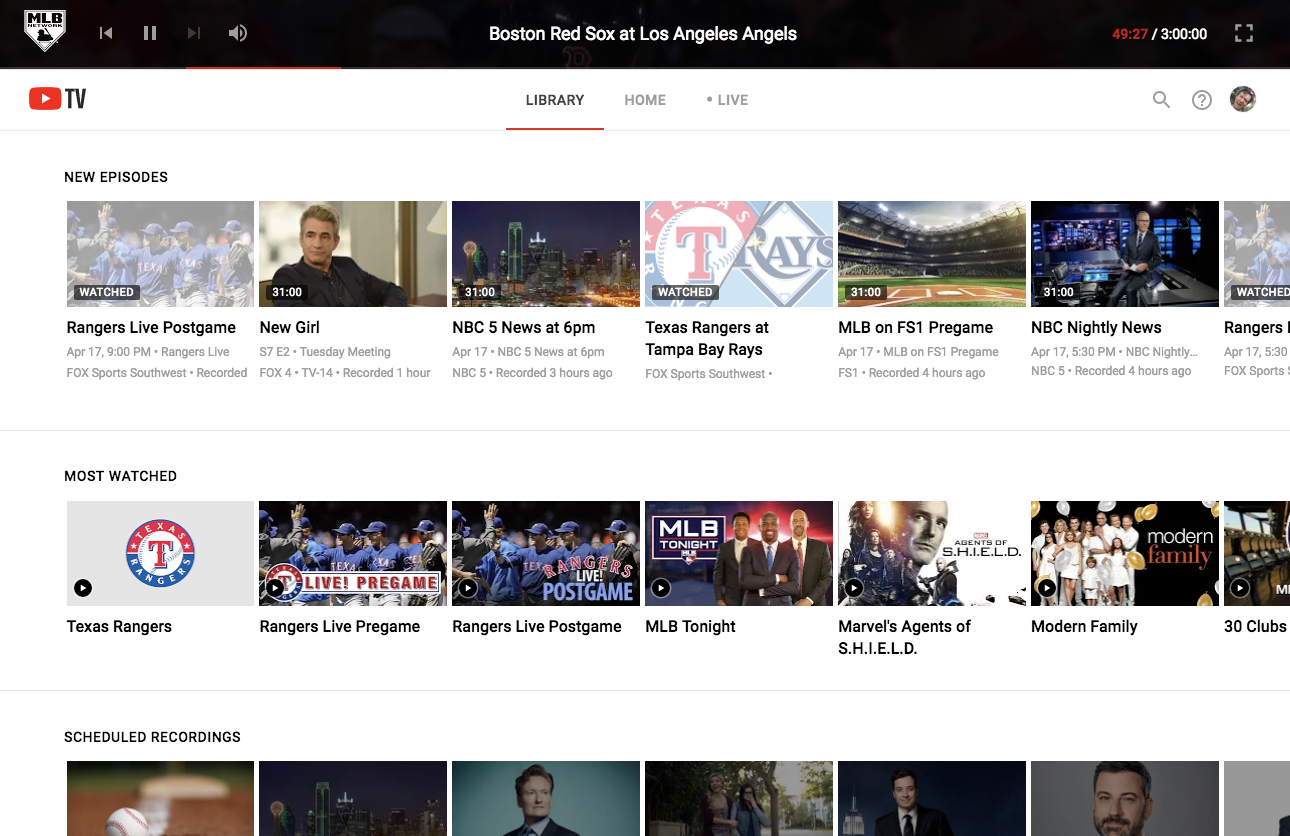 Given you can record “everything”, it’s an interesting way to build up collections for binging.  I’ve been meaning to watch Parks & Recreation – I added it here, and within a month, it had recorded well over half of the episodes of that show.  That’s pretty cool. 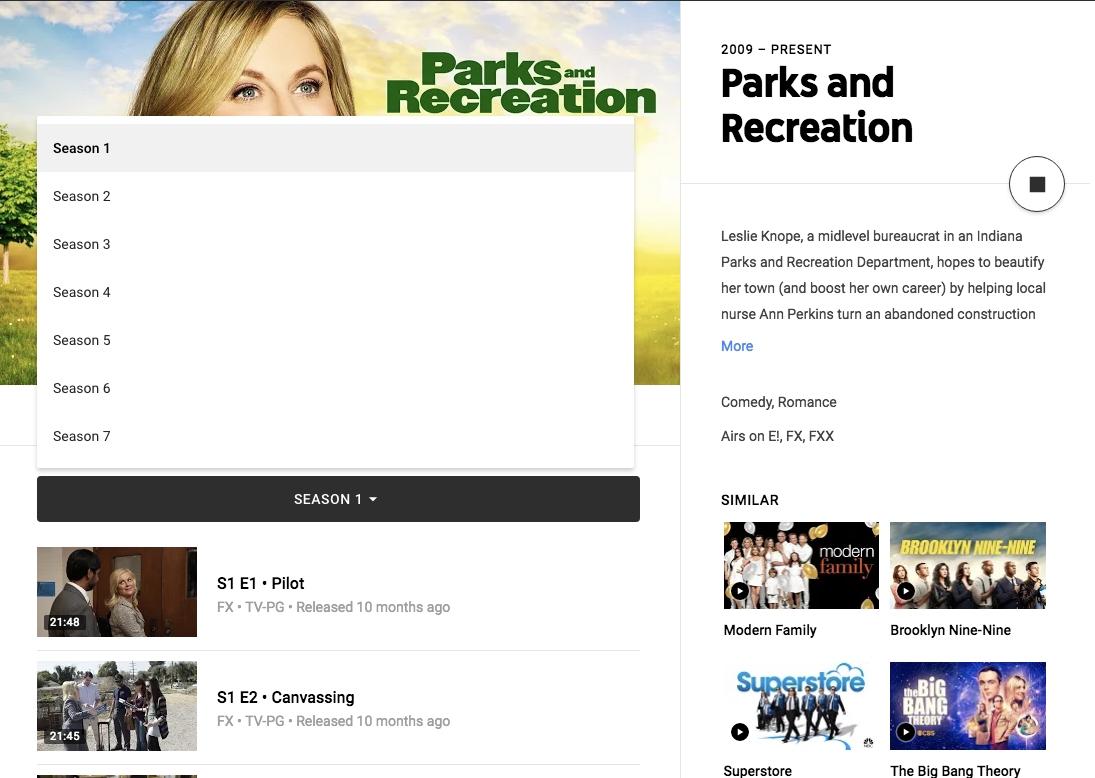 The Live TV view has some nice graphics for shows that are well, “live”. 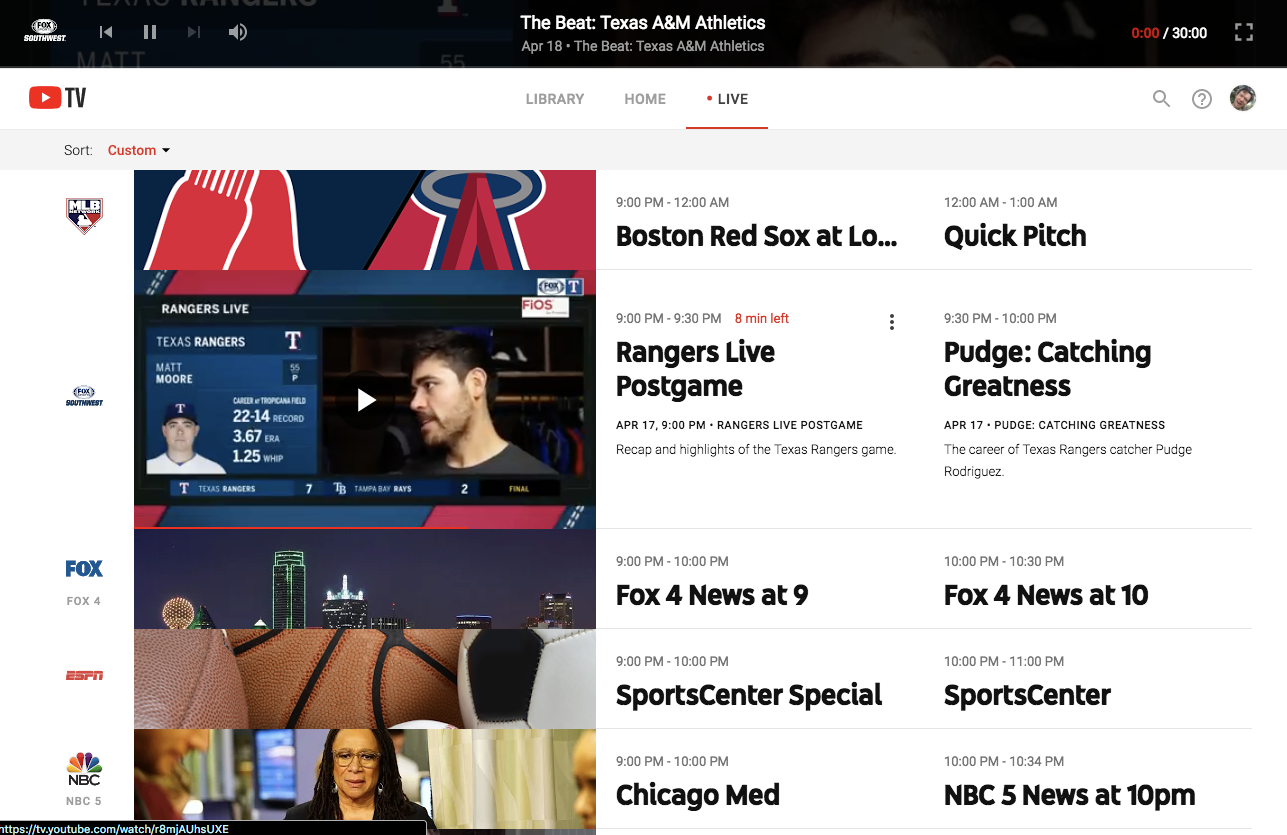 All of these things combined together are why I have a thing for Youtube TV.  In fact, I’ve started watching more things on this than I have on TiVo, and I’ve been a TiVo customer since 2000.  That’s also got to do with TiVo’s new 2018 interface, which I’m NOT a fan of.  But I digress.

As great as they are, there’s still a few nits I want to see improved.

Those are the only flaws in the system I’ve run into.

UPDATE Apr 2020: A few things have changed on my nits since I wrote that a couple of years ago.

As for their channels..

Their channel listing is shown below, and they have a much more fiddly listing of channels here.   Now they don’t have all the popular channels yet.  Specifically Scripps network channels (including Food Network, HGTV, Travel Channel) and Viacom (MTV/VH1, Nickelodeon, BET, Comedy Central).  There’s some talk that the Scripps channels will get added this year.  No word on Viacom that I’m aware of.

While I mostly use Youtube TV on a computer with a browser, or my Apple TV, I also have used it on my Xbox One, as well as my iPad.  A full list of supported devices is available on their site here.

Ultimately, channel choice will drive the choice of service here, and for me, that’s truly MLB Network and Fox Sports Southwest.  Couple that with the superior DVR interface, and it’s game over for me.   Youtube TV is is for me.

Now I know there’s a few others in this market now (FuboTV being one), and T-Mobile recently bought Layer 3, and will be having their own streaming service later.  But I can’t imagine a combination of service that will beat this for me, so I’m all in on Youtube TV.

They have a free trial, which is only a week, but still.  Check it out.  You might like it.  I LOVED it.