You’d never actually want to do that, but that’s what someone is doing to Jimi Hendrix. The best way to honor one of our best all time guitarists is to name some sort of energy drink after him, isn’t it? I mean why not dig up his corpse, and set what’s left on fire? Wouldn’t that be just as honorable?
Here’s the whole story. Sigh.

END_OF_DOCUMENT_TOKEN_TO_BE_REPLACED

Several years ago my wife and I ran across a band by the name of Wayanay Inka at the State Fair of Texas. We got rather enamoured with them, and their appearances at the State Fair were one of our favorite things to look forward to. Unfortunately in 2005 and 2006 they were not asked back – I hope that changes.
These guys are Andean music from Peru. Not something that’s my usual cup of tea, but we really enjoyed their stuff, we’ve bought a few CD’s from them at the State Fair gigs we saw ’em at. In this post is a video they have of probably my favorite song of theirs called “Coral”. You can check out more information about them at their official website.

They have a few other videos on Youtube as well. Here, here, & here.

Have you ever thought about your soul – can it be saved?
Or perhaps you think that when you’re dead you just stay in your grave
Is God just a thought within your head or is he a part of you?
Is Christ just a name that you read in a book when you were in school?
When you think about death do you lose your breath or do you keep your cool?
Would you like to see the Pope on the end of a rope – do you think he’s a fool?
Well I have seen the truth, yes I’ve seen the light and I’ve changed my ways
And I’ll be prepared when you’re lonely and scared at the end of our days
Could it be you’re afraid of what your friends might say
If they knew you believe in God above?
They should realize before they criticize
that God is the only way to love.
Is your mind so small that you have to fall
In with the pack wherever they run
Will you still sneer when death is near
And say they may as well worship the sun.
I think it was true it was people like you that crucified Christ
I think it is sad the opinion you had was the only one voiced
Will you be so sure when your day is near say you don’t believe?
You had the chance but you turned it down now you can’t retrieve.
Perhaps you’ll think before you say that God is dead and gone
Open your eyes, just realize that he’s the one
The only one who can save you now from all this sin and hate.
Or will you still jeer at all you hear? Yes – I think it’s too late.

END_OF_DOCUMENT_TOKEN_TO_BE_REPLACED

I run a site about one of the most classic heavy metal bands there is. I do work for some metal musicians. Yet, this artist still intrigues me. No idea why, but this song really hooked me.

It’s “Hung Up” by Madonna from her “Confessions on Dance Floor” album. Weird Al Yankovic has a new album coming out next week (Sep 26) entitled “Straight Outta Lynwood“. As usual, he’s hit a home run with the first single from the album. This is “White & Nerdy”, which is a parody of the song “Ridin'” by Chamillionaire (. I’ve been listening to Weird Al since his first album was new in 1983, and I’ve found as time has passed, the songs he parodies I tend to know less and less as I don’t care for most current “new” music. That makes the parodies and some of his better quality originals seem more the same to me, as I have never heard “Ridin” before.
Al has produced a seriously funny video to go with the song, which can be viewed below. You should also check out Al’s website, his Myspace page, and the Wikipedia entry for White & Nerdy, all of which contain more information. In particular, the Wikipedia entry contains a lot of explanations for things in the video.
I’ve had this on pre-order for ages, and if the rest of the album is as strong as this (which is always a gamble with Weird Al original songs) parody is, then it’s a definite must purchase. You can order it by clicking on the album cover art above.


Get this video and more at MySpace.com
I remember now. I remember how it started.
I can’t remember yesterday, I just remember doing what they told me.

April 4th – it’s coming! And I can’t wait. I’ve been waiting for this album to be released since 1988 when the original came out. 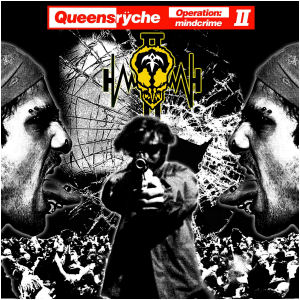 Not only is Queensryche releasing a sequel to one of my all time favorite albums by anyone ever, but David Gilmour of Pink Floyd is releasing a new solo album, too. It will be a good month for music.
Ronnie James Dio is Dr X – that’s so cool, I can’t describe it. Can’t get here fast enough.

There’s a new David Gilmour album coming out in 2006. It’s going to be called “On an Island”. It’s been 21 years since Gilmour last released a solo album, and 11 since the last Pink Floyd studio album, so this is very welcome news.
I don’t know anything more about it other than it’s title and release date – Mar 6, 2006. I saw some tour dates listed on a Floyd news site I visit. Also, his official site has just launched, too:
We can confirm that on his birthday David will release his new album which has now been completed. Plans for a European and American tour are in the works and some firm dates are set (see below). David wants to tour between March and May of 2006. There is information that David will utilize an orchestra and chorus on his tour.
http://www.pinkfloyd-co.com/pfco_news.html
http://www.brain-damage.co.uk/general/news.html

The Beatles are founding fathers of music, and they deserve some respect for that. However, U2 has been more solid over a far longer period of time releasing NEW MUSIC. Yeah, the Beatles have been around for a far longer number of years, but put together the years they were together, and compare it to the number of years that U2 has been around.
U2 had a few down years in the 90’s (Zooropa, Pop), but they have more rock solid albums from front to back than any other artist I can think of. U2 wins hands down over the Beatles.
That is all.