Some years ago when “my” version of 3D Realms was still going, there was a really active community of Duke Nukem fans.  There was a thread on the 3D Realms forums asking people to post their collections of stuff.  Initially I didn’t want to participate, because given my job there, I was likely to have more “stuff” than anyone else did.   But after some folks had asked, I decided to give in and post some pictures of my “Duke Nukem swag”.   I posted this back on the 3D Realms forums in 2008, and then on the Gearbox forums in late 2010 or so.   Today (Jul 24, 2015) I saw some tweets from people about Duke collections, so I decided to repost my old pictures here.  Just one or two of these aren’t mine, I’ll note which items weren’t from my personal stash below.  Here they are, with some descriptions as to what is in the pictures…

This first group of photos was taken on June 6, 2008.  This was done in the conference room of the 3D Realms offices.  Later on I realized I should have put the stuff on the floor of our lobby to make use of the really cool Nuke logo (which I’ve written about on my blog elsewhere), but I didn’t think of that at the time.  Here goes…

Oh yeah.  Any picture can be clicked on to see a larger shot.  If you want to bypass the “popup” pic and go straight to the giant version, right click on the picture and “Open Link in new tab”.  :)

Picture 1: “The Everything Shot”

I set up all this stuff on the table in the 3D Realms conference room. First off, I didn’t have enough room on my desk for all this stuff, plus I had two Duke posters behind this for the pic. 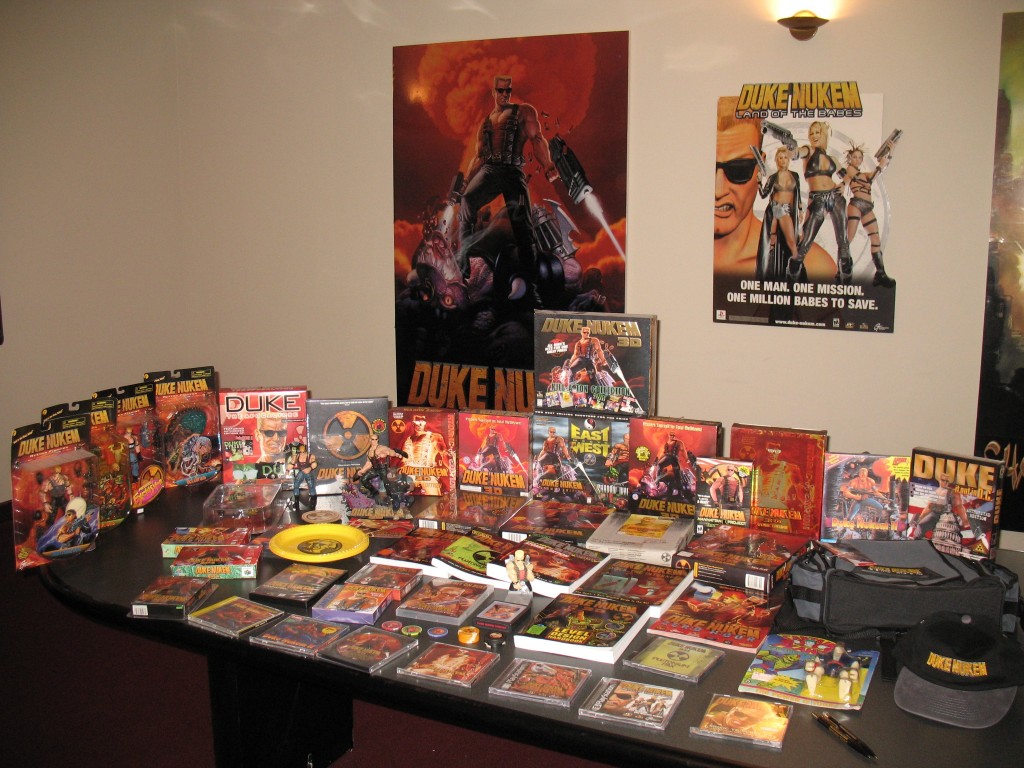 This is mostly a shot of the various original Duke 3D action figures… Nightstrike Duke, the Battlelord, SWAT Duke, and the Octabrain. Laying down is a boxed “regular” Duke.  This was my stash except the Nightstrike variant of the figure came from Scott Miller’s stuff.  We only had a couple of those, and I really wanted to present all the figures together. 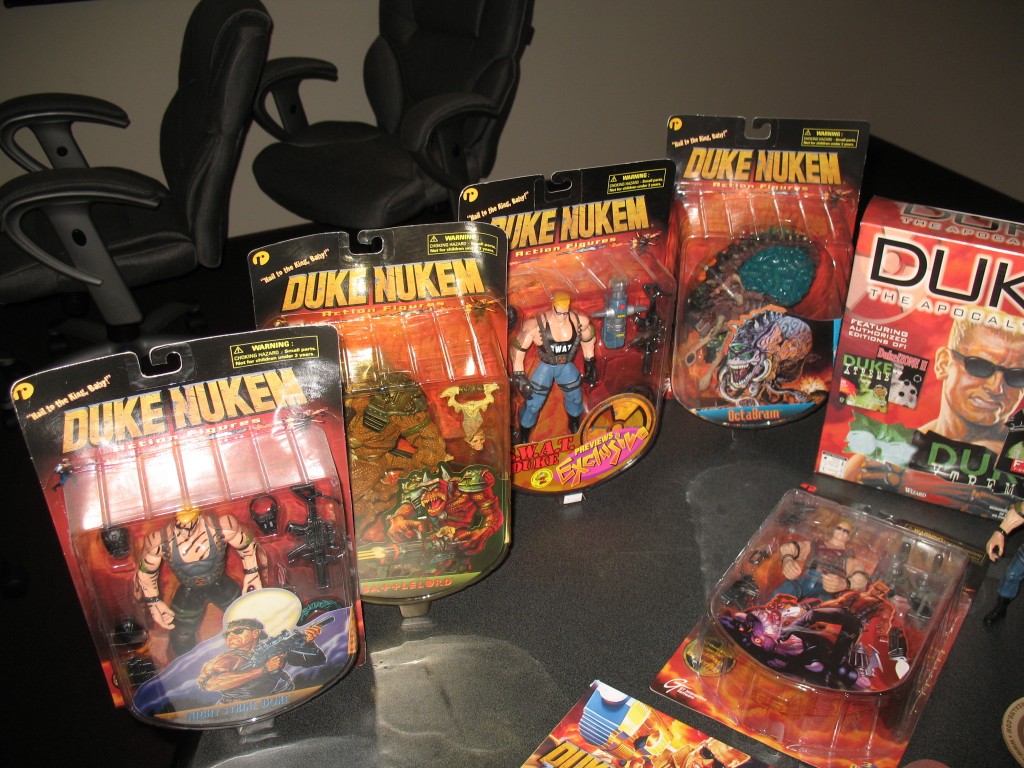 This is various stuff.  Here’s a list of what it is in clockwise order, starting with the Duke figure from the last photo (the items you you see to the right of the yellow paper plate are covered in another picture) 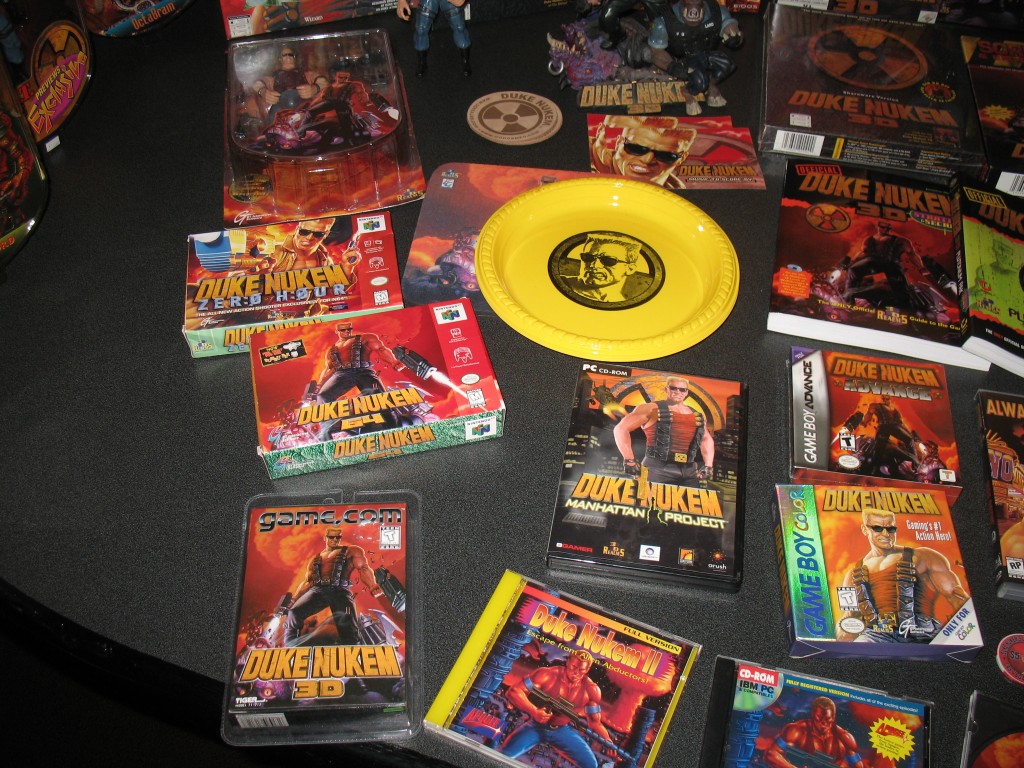 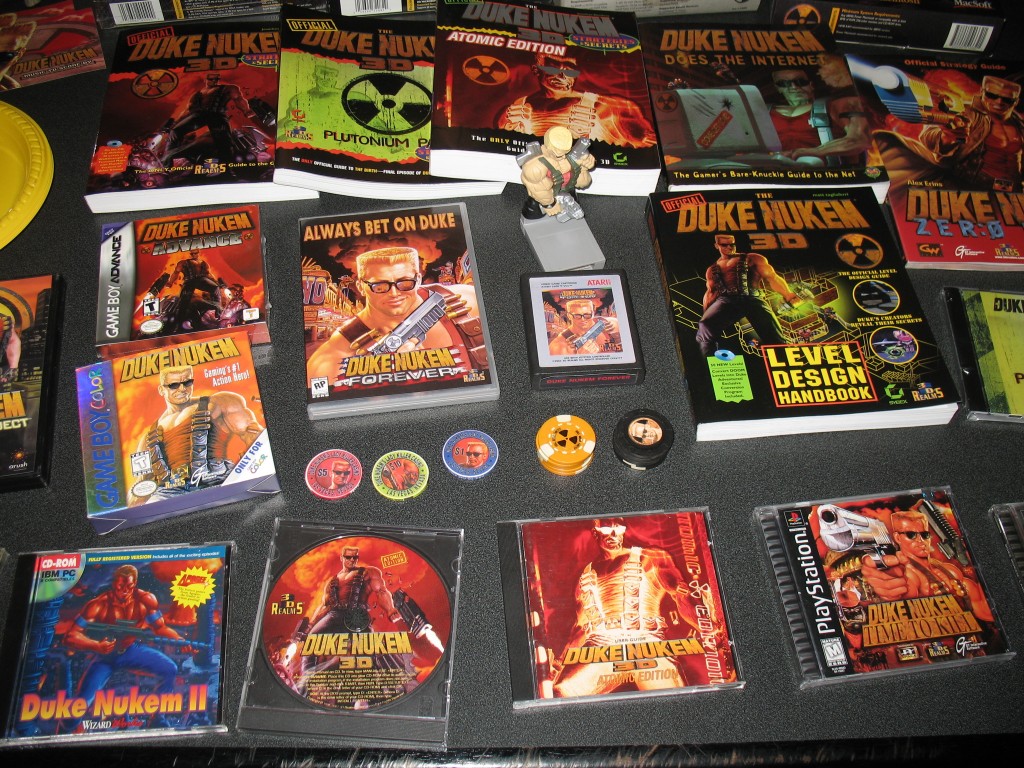 Various items.  Going from top to bottom (since some is in the last pic): 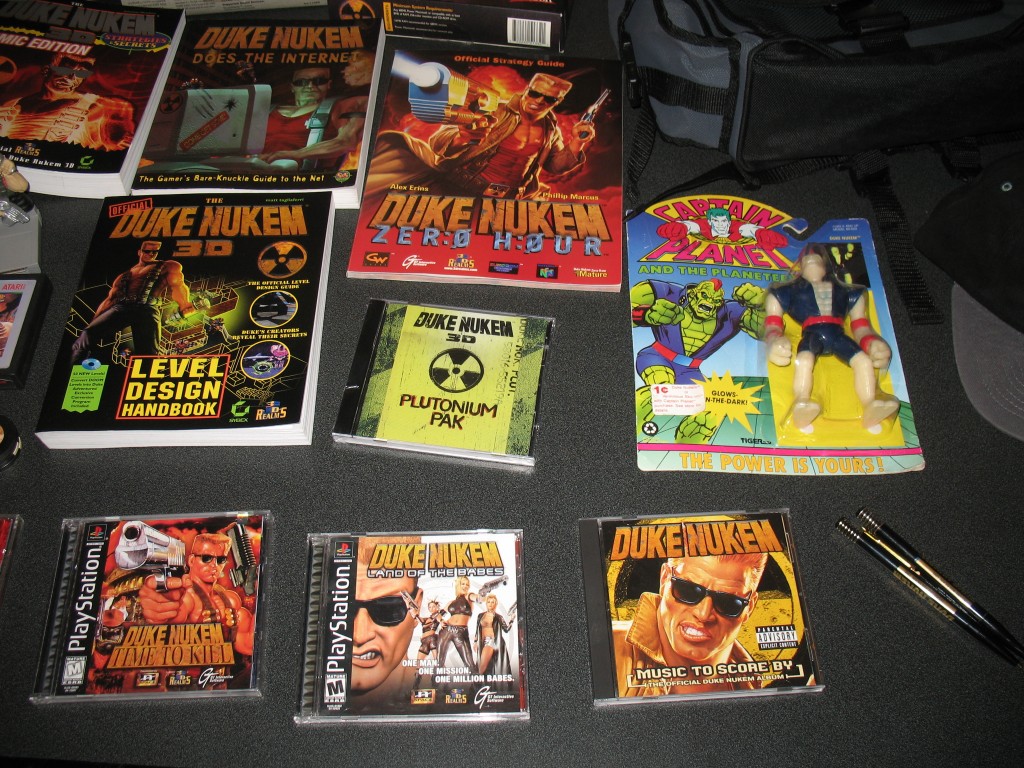 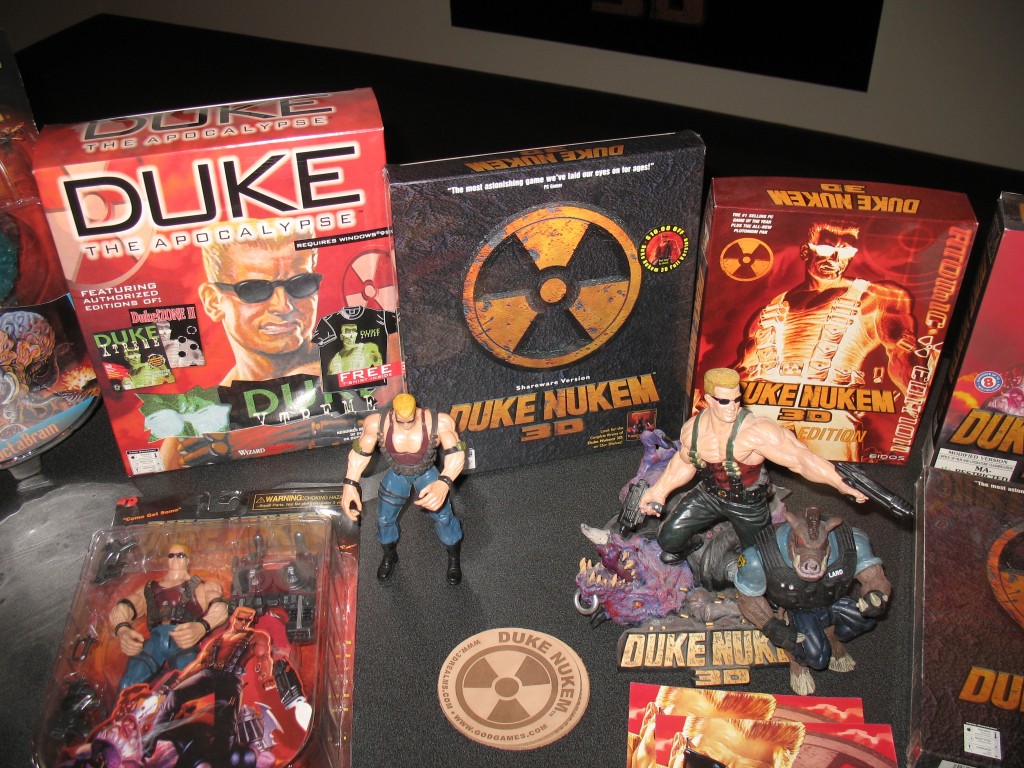 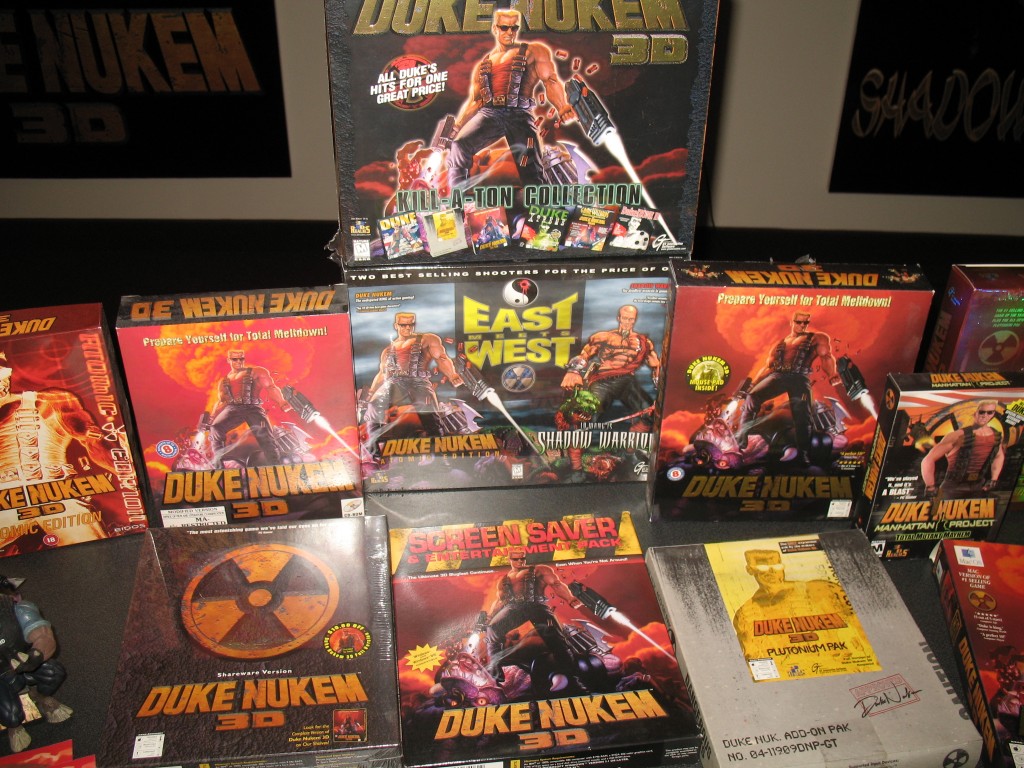 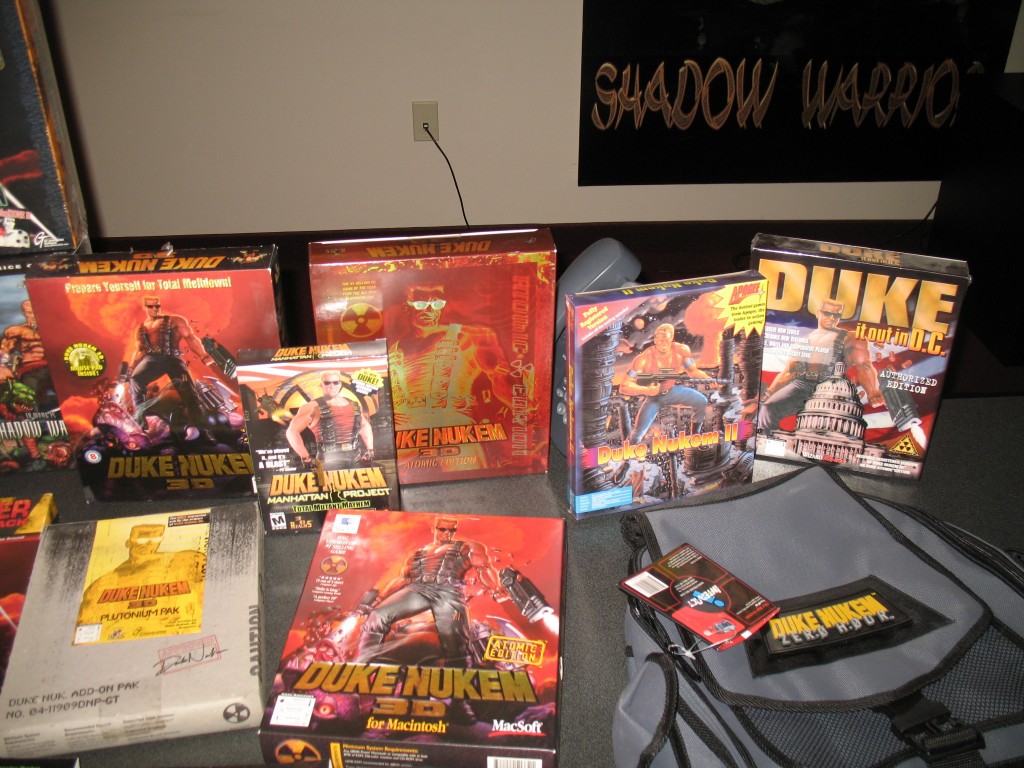 When I was packing the stuff back away from the main picture, I found these couple of items I forgot to put, so this is the “Oops, forgot about this stuff” picture… 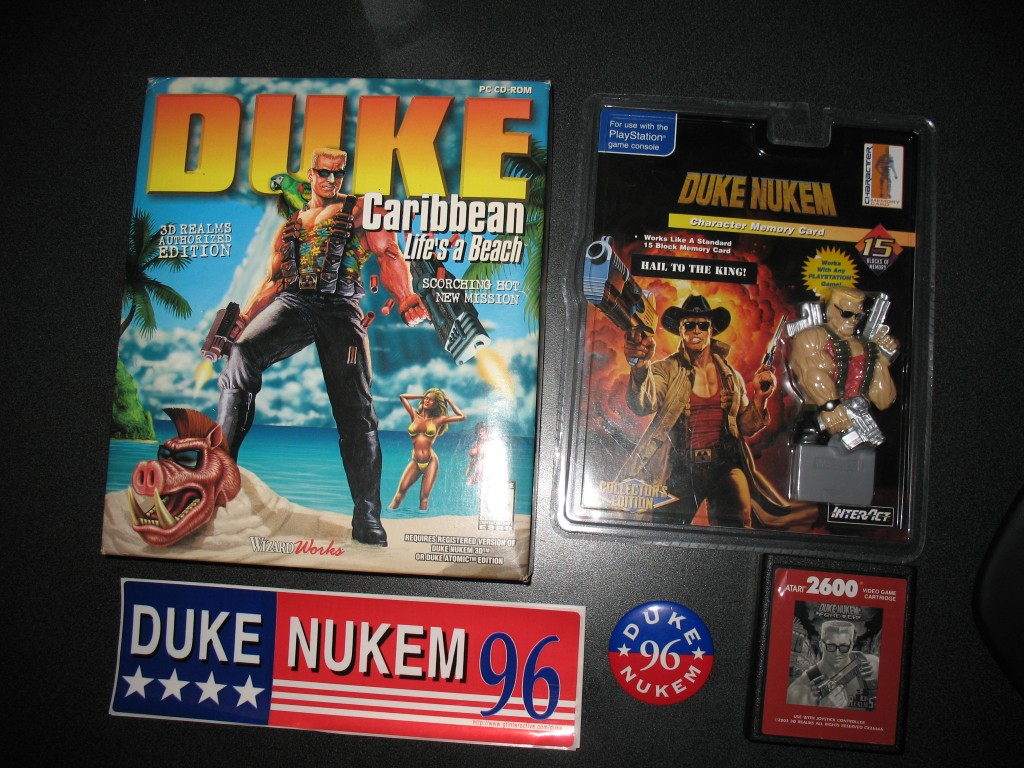 These other pictures were not part of the original “photo shoot” for reasons that will be obvious when you read about them.

This first one shows several casino chips around Duke Nukem.   This picture was taken on June 20, 2011.  I got out all the Duke chips I had.  The two on the top came from the DNF Deluxe edition package.  The color ones in the second row were ones that George had made up for playing poker at his house, which was a frequent event.  The others were promotional items.  The black and yellow ones with the white parts around the edge were from a fake casino table that was set up on the Gathering of Developers lot at E3 2001.  There’s a picture of Lee Jackson playing the fake craps table here which shows several of the chips.  I can’t remember where the four black ones on the bottom came from.  I think that’s some other promotional thing that I can’t recall the origin of. 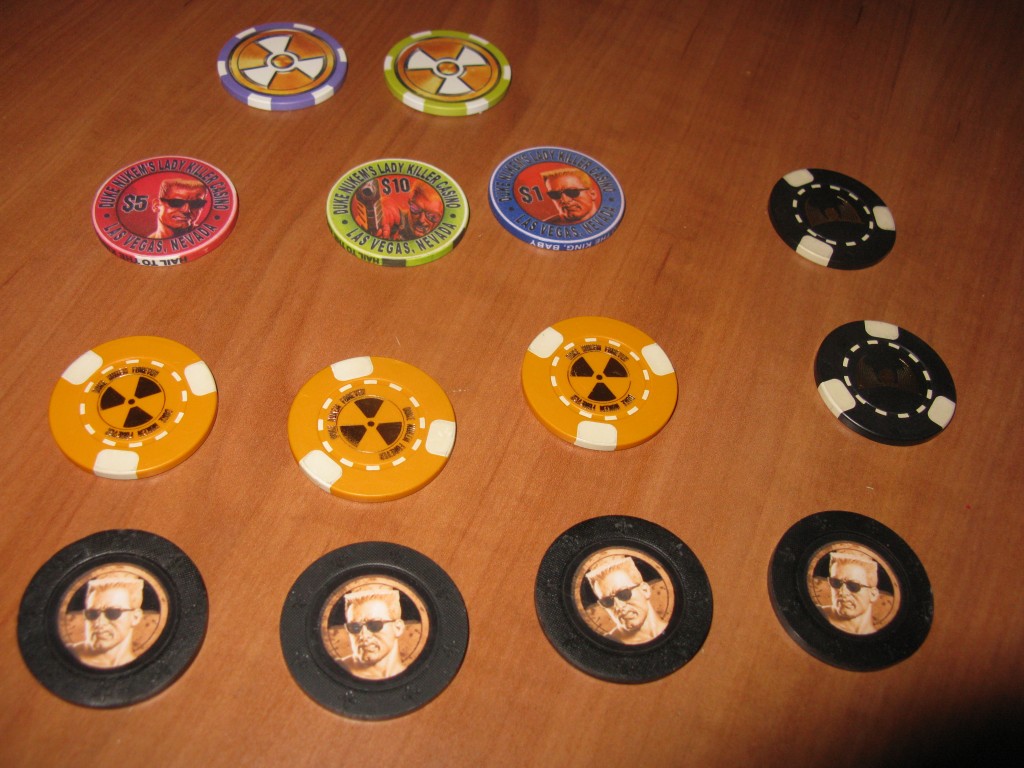 After Duke Forever finally came out in 2011, I gathered together all my DNF stuff and took a similar picture as the pictures above.  Here’s that picture, with commentary.. 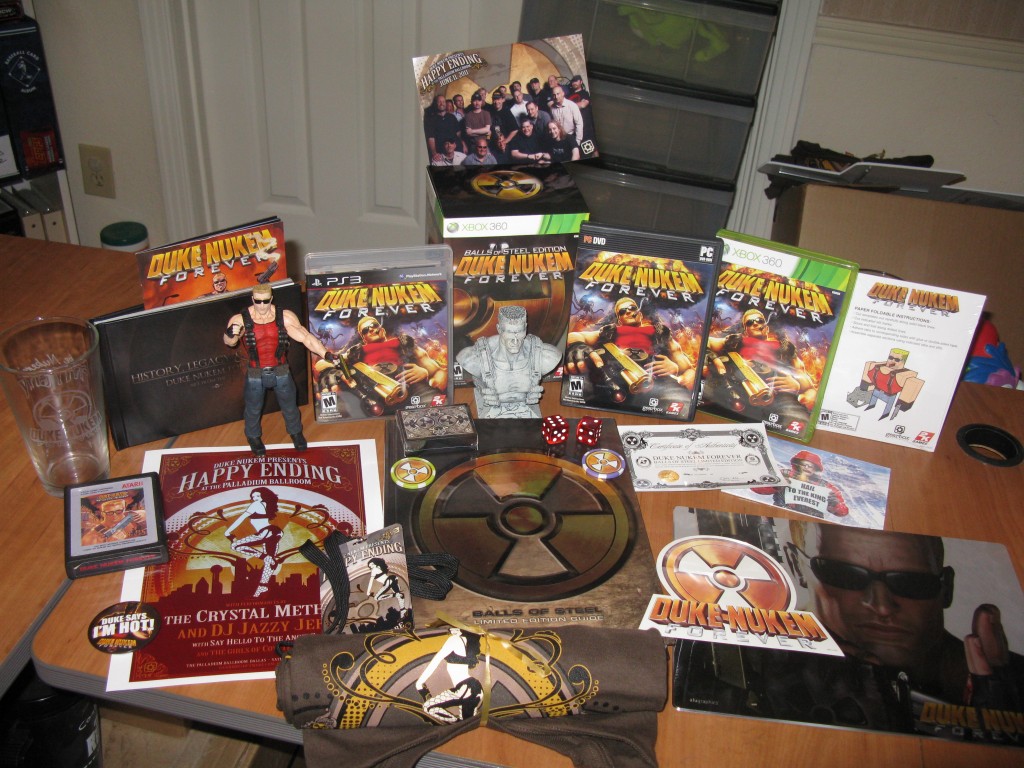 I also found copies of several old Duke Nukem T-Shirts we made up for various E3’s and all that. Decided not to take pictures of them, as I’d have to take ’em out of the plastic they’re in, and they don’t look good unless you take pictures of both sides, etc.. Basically decided to skip the T-Shirt pics, because they wouldn’t look very good.

All of the Duke pictures above were preceded by my “Shadow Warrior” swag picture.  Not nearly as much stuff, but given I took the pic, I thought I’d include it, as well. 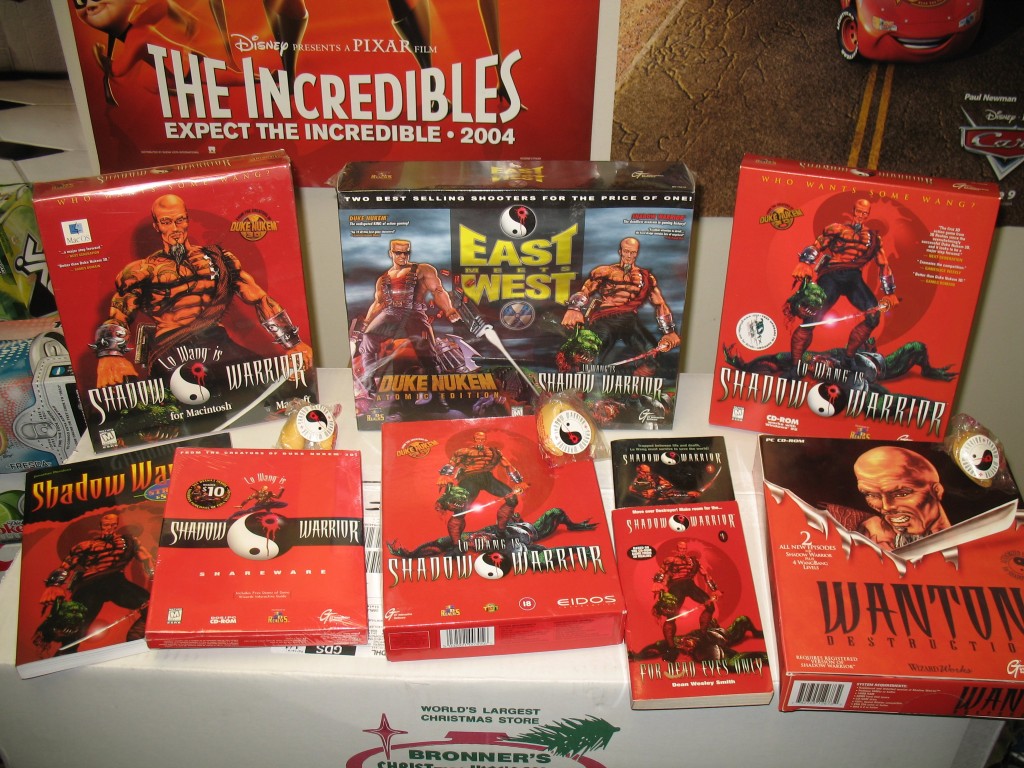 After my version of 3D Realms fell apart in 2009, and I lost my job..  I eventually had to sell off a lot of this stuff to help keep the finances working.  When you’re unemployed for over three years, there’s a cost.  But I kept some of the stuff, I couldn’t get rid of all of it.  That’s a look at my “Duke swag”.  If you have any comments, please leave them below.

Thanks to Matty Heritage & the crew at LazyGameReviews on Twitter; both of which got me thinking of putting this stuff on my blog.  :)