Star Wars I: The Phantom Menace

Earlier this year, I was looking through all the movies I own, and there’s a lot.  When I was going down the list of them, I decided that at some point, I would start on a project where I’d watch them all. Partially because I recognized there was a decent percentage (like somewhere around 5-10%) of movies I own that I never watched.  This bothered me.  It’s not the first time I’ve done this, I undertook the same project some years ago with all the music I owned, and tweeted about it on my music twitter account.  I’m basically doing that, except this time I’m using my own Twitter account, and I intend on blogging about them vs only tweeting.  Basically, my plan was to watch all of them, and make a few comments on them.  Not write 2,500 word reviews, but a few thoughts as to what I thought after I watched them.

So that’s what I’m doing tonight.  this is the first movie in this review series, and I start with a rather notorious “Number 1”.  Star Wars Episode 1: The Phantom Menace. 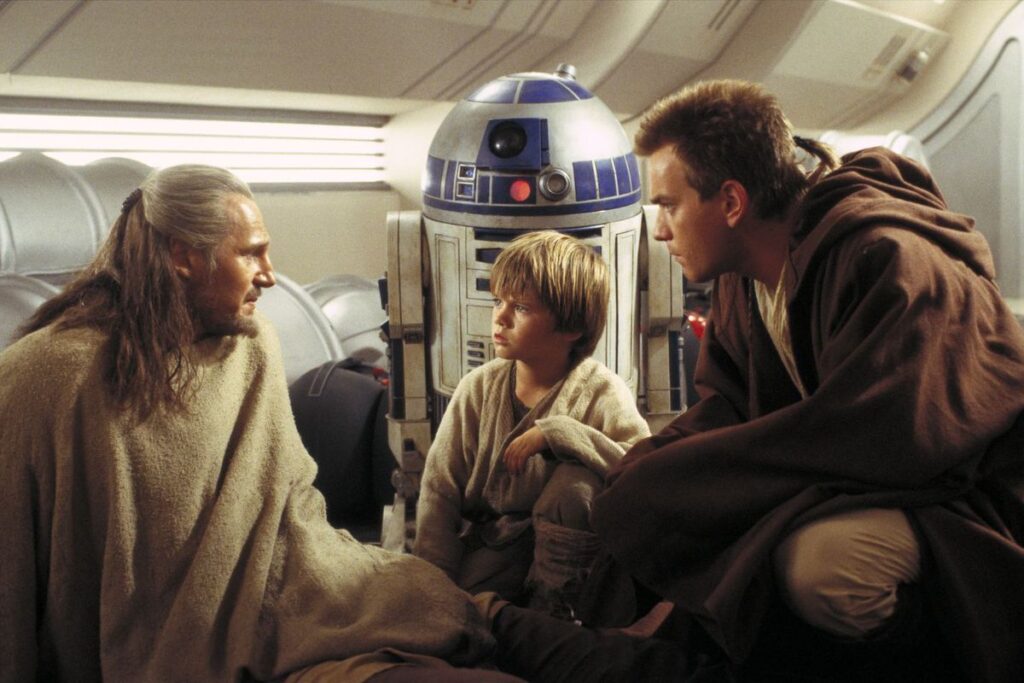 One last bit of intro.  I had intended on starting at the top, and going alphabetically, which would have had me watching either “42”, or “The A-Team” (Depending on how you alphabetize).  However, I realized that with the new Star Wars movie out next month, I wanted to watch all the previous “Saga Films” in order before seeing the new one, timing it such that Episode VIII would be a couple of days before seeing the new one.  So I’m starting this process with Star Wars, then I’m going back to the top of the alphabetical list.

I remember a little bit over 20 years ago, it was the Spring of 1999, and I was working a video game company.  We were all Star Wars geeks, and we collectively went (with a ton of wives and girlfriends) to buy tickets to see this movie.  It was (at the time) the first Star Wars film that had come out in 16 years.  So we were all psyched.  Then the first trailer came out, and we were still pretty psyched, but..  Oh hell with it.  Jar Jar Binks.  That’s this film’s major downfall.  When Binks showed up in force I believe in the second trailer, it really put off a lot of my friends.  I knew who the target audience was, and it wasn’t 27 year old video game designers.  Well, I’m double that age now, and Jar Jar is still darned grating, and is still in 2019 clearly the worst problem with this film.  The other negative is the acting of the kid they got to play Anakin Skywalker.  He acted fairly rigidly, which oddly was carried through into Episodes II & III with a different actor.  But Jar Jar was the biggest problem.   Also, a lot of my friends really detested the talk of midichlorians.  While I personally didn’t have a problem with it, their logic was it takes the mysticism out of “The Force”, and makes it something that you can measure via a blood test.  So OK, I guess that’s three big problems.

If you took Jar Jar out, and had a different kid as Anakin, I think this would have been received much better.  Overall, it’s not that awful of a film, having just watched it again tonight.   There was a lot to like.  It looked amazing, and I thought Ewan McGregor was PERFECTLY cast as Obi-Wan Kenobi.  He alone is probably the best thing in all the prequel movies.  I liked Liam Neeson, although I would have preferred he not been killed off at the end of the film.  To date he’s not re-appeared in any form, even as a force ghost.  There’s some talk he might turn up somewhere at the end of Episode IX next month, but we’ll find out later.  The pod racing sequence was a lot of fun.  I also loved Samuel L. Jackson being in here, although this movie gives him the least to do in any of the three movies he was in.  More on him in the next reviews.

My absolute most favorite moment in the movie – and this is an opinion shared by a lot – is the light saber duel between Qui-Gun, Obi-Wan, & Darth Maul.  It was brilliantly choreographed, it looked amazing, and the song that with it – “Duel of the Fates”.  It’s probably up there with the main Star Wars title music and the Imperial March as the best music in any Star Wars anything.   Not even close the best thing in the movie.


There were other fun little bits, too.  Seeing C3PO in pieces was amusing to me, I liked finally seeing the Jedi council, and of course Jedi doing their thing in full glory.  I’m a fan of Whose Line is it Anyway, and one of the Whose Line folk is in here – speaking of Greg Proops. He’s one the two “head voices” who were the “starter” for the pod race.  An actor I like from a whole lot of things, but is known very well for being in Flash Gordon (1980) is Brian Blessed.  He did the voice of the Gungan King.  He’s VERY distinctive and very noticeable.

I did think that Natalie Portman is wasted in these movies.  She’s a good actress, but doesn’t do much from an acting standpoint.  ESPECIALLY in the third film.  Here, she mostly postures and changes outfits.  For a queen traveling, she must spend a TON of time in makeup and wardrobe, given all the out there hair styles she has.

Most everyone slags off this movie as being really bad.  In fact, when I posted on Facebook that I was watching this tonight, one of my friends said “yoosa in for some poo doo.”  That made me laugh, and is pretty much the opinion of most people.  While I can’t defend the movie and say it’s awesome, it’s not *ALL* bad, and it’s kind of telling that my defense of the movie is “it’s not all bad” (with a kind of a shrug of the shoulders to go with it)…. 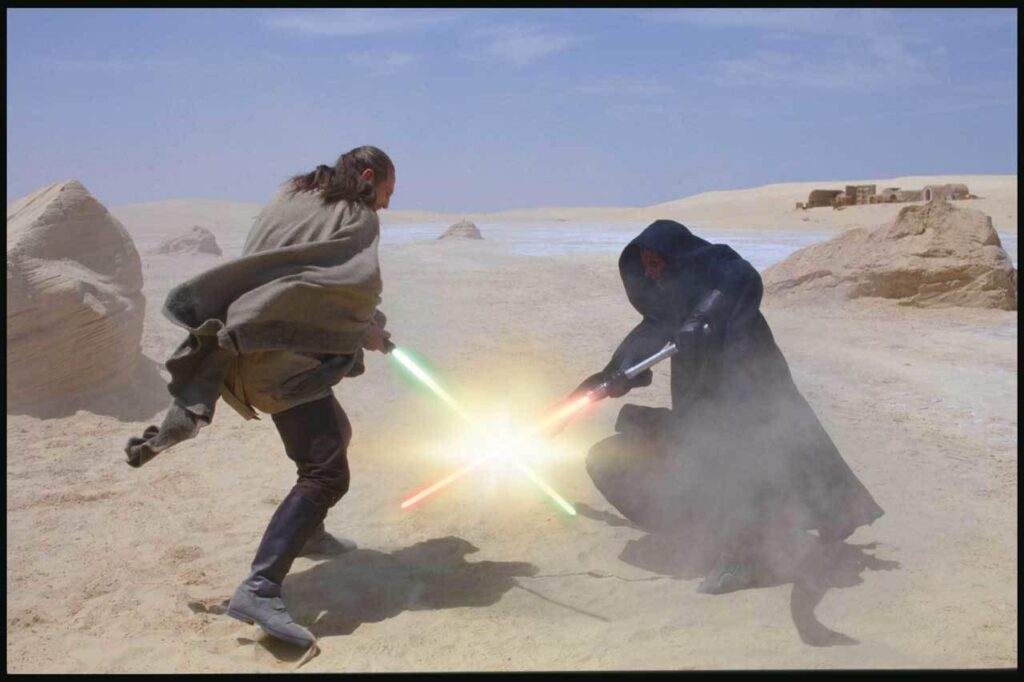 Bottom line, it’s a “meh” of a movie.  The handful of really good bits are drug down by the really bad bits, so it ends up with a C rating for me.

As I said above, this probably could have been a LOT better, had Jar Jar Binks been either removed, or severely pulled back.   I don’t hate it, like most people do, but it’s by far the weakest movie.  But even the weakest movie has a few good parts here and there.

One parting comment.  What exactly is “The Phantom Menace”??  All these years, I’ve never understood what that actually means.