Finally getting back to my movie review series.  I let it sit for a little bit, which is an odd thing given everyone’s at home due to covid, but I didn’t find the desire to do it.  Until I thought about having done the series of Star Wars films, and then thought what other series could I do?  Well, I decided to hit Star Trek.  So a couple of nights ago I watched the first Star Trek film from 1979, “Star Trek: The Motion Picture”.  Here’s my thoughts on that..   As usual, I assume you’ve seen the movie, so spoilers ahead…

A few words of background.  I was one year old when the original Star Trek TV series started in 1966.  Family legend has it that my dad would watch Star Trek and Wild Wild West when my mom was out with her friends.  So while I don’t remember it, I consider myself an original Trek fan.  I do remember watching the Animated Series in 1973 on Saturday mornings, and through the 70’s I watched all the Trek reruns I could get my hands on.  Given there weren’t 7 Trek series then, you could get a good handle on them, and my brother and I had most of them memorized.  So it was not a huge surprise that I was excited when they announced a movie for 1979.  It’s birth was in the ashes of the canceled second series (Star Trek: Phase II), but that didn’t matter to this 14 year old.   In late 1979 I queued up to go see this movie on opening night.  It started a trend that I have continued through till now.  I’ve seen all 13 Star Trek movies (TOS, TNG, JJ) on opening night.  Whenever there’s another one, I’ll see that, too.

But anyway, to the movie.   It started off with a bang, a scene that I still enjoy to this day.  It’s three Klingon ships fighting what seems to be a giant cloud.  At the time we don’t know who it is, but the scene was also a shock.  This was the first time we saw Klingons with ridges on their heads.  After all the years of seeing them the old way in the original series, this was a change.  Took some getting used to, but I did like it.  Story goes that’s what they wanted them to look like all along, but the original series didn’t have that kind of cash for makeup work. Fun fact, the guy playing the Klingon captain is Mark Lenard who also played Spock’s father Sarek and the Romulan commander in the episode Balance of Terror.  It was a fun scene, and the music in it was great.  In fact, at the time, my brother and I called it “Klingon Mad Music”.  While it’s still a fun sequence, you can see the 1979 special effects in places, and it’s a little jarring in 2020.  Fortunately, while writing this, I found out that someone redid the special effects for this sequence.  The new SFX version is an improvement on the 79 originals, but the update keeps the flow and doesn’t change the scene, just fixes the SFX problems.  It’s a fan thing, nothing official.  Check it out.

Those who know their Star Trek history know that the original pilot episode from 1965 was rejected with the reasoning of “too cerebral”.  Now I won’t make that claim on this movie, but it does have an AWFUL lot of talking scenes and exposition.  There’s not a ton of action in this film.  Beyond the aforementioned Klingon scene, there’s one scene where they try to take the Enterprise to warp, and they get stuck in a wormhole.  It’s not big action like the Klingon scene, but the entire sequence is shot with distorted video and audio.  I always loved that effect, you can see in the screenshot above this paragraph and in another shot here.

The wormhole sequence is also the first major scene with Persis Khambatta, who played the character of Ilia.  She was bald, and if I remember right was the first bald female character in a major movie like this?  At the time when I was 14, I wasn’t into how she looked, I was more into Kirk, Spock, and the Enterprise.  But now that I’m older, I can appreciate the look they were going for with her.  You rarely see bald women, and when you do, they’re usually sick.  That’s obviously not a general statement on all women, but for the most part, intentional baldness is not a thing I see much of in women.   As a side note, she has some nice legs, too.  But I digress.  :)  In the original version of this movie when it was supposed to be just a TV series, Decker & Ilia were going to be series regulars, and we would have explored “them”.  They had a relationship off screen before the movie (and the abandoned series), and that isn’t touched on much in the movie, just a line or two.  I always wondered where that would have gone with more time.  Neither survives this movie, so we never got to see any more of it in Star Trek II – but I’m getting a bit ahead of myself.

Spock doesn’t join the cast until about halfway through the film.  His journey is more personal, and at the end he says he’s good, and whatever he came for he got.  I never fully was on board as to what made him happy/adjusted vs the conflicted he had at the start of the movie.  He had a mind meld with V’Ger and then he was good?  I never fully grasped that.  Suggestions?   Nimoy’s performance of Spock was much more wooden than the past.  Now I realize that part of it is down to what Spock was going through, but unfortunately it’s a common complaint about the cast.  Everyone came back, but it felt like they had all forgotten how to play these characters.  What made the characters memorable from the original series is mostly lost.  I think a lot of that is down to Robert Wise, a well respected director, but I felt was wrong for this movie.  Now it’s not an action movie, so you don’t need a James Cameron, but when I think of Sci-Fi I don’t think of Robert Wise.  When I think of Wise, I think of his two most well known films (I think) – West Side Story and The Sound of Music – neither are even remotely close to Star Trek.  I suppose the Andromeda Strain might be, but that had the same kind of “feel” that the first Star Trek film did to me.  I could be wrong about Wise, as I’ve seen commentary from people who think exactly the opposite of me, but that’s my take on Wise – I think it’s the reason the movie is fairly slow and plodding for the most part.   The plodding part really bore itself out once the Enterprise gets to V’Ger – they spend a good 20 minutes just doing pans with no dialogue, just having you watch a brutally slow journey into the cloud.  That could have been shortened a LOT, and I think that was down to Wise.

Anyway, enough negative.  There were quite a few things I really did like about the movie.

Ilia was killed in the middle of the movie, but came back as a replica created by V’Ger (or Voyager), she was V’Ger’s conduit to the “infestation”.  I thought Persis Khambatta did a good job portraying a robot.  There were several scenes where it was easy enough to just stand around doing nothing to be a robot, but her head turns, her tone of voice, it all sold it for me.  That was one of my highlights was her performance.

The end of the movie was a bit confusing.  It was the Voyager 6 probe (based on real life, but didn’t actually happen, there was a Voyager 1 & 2 – not all the way to 6) being damaged, repaired by a race of machines, and returning to earth with a hybrid of its original programming.  It’s learned all it can learn, came home, and wanted to join with its creator.  It’s one of those things I get and don’t get at the same time.   I mean it’s a way to get rid of the Ilia & Decker characters, and it works, but even talking about it, I’m still somewhat confused.

I don’t dislike the ending, it’s an intelligent ending, I suppose.  It just confuses me if that makes sense.

I don’t have a huge summary here, as I’ve pretty much laid out my thoughts here.   It’s not a bad movie.  When I watched it, there were several parts I really enjoyed.  Exploring Ilia as a robot trying to touch was left of the real life person was a great idea.  But the blandness of the characters was a problem, and the really slow pacing didn’t lead itself to a big thrill of a movie.

It’s usually down near the bottom of people’s favorite Trek movie lists for a reason.  It’s not awful, but not that great, either.

And second..  This guy to the left.  Is it me, or does it look like Riff Raff from Rocky Horror Picture Show went and joined Starfleet?  ;)

A week or two ago, there was an updated version of this movie released on Paramount+.  They took the 2001 Special Edition, which had input from original director Robert Wise, and cleaned up all the special effects, remastered it for 4K, and made it look a whole hell of a lot nicer.  That’s probably the best way to watch this movie now.    It looks so much better than any prior version or release of the movie.  Press Khambatta’s legs look even better here!

There’s a trailer for this 2022 4k version here, which shows some of the cool changes.  Speaking of that, I suggest you check out this review by another blogger (Josh Edelglass) – he gets into the nitty gritty of what’s changed, different versions, etc…  If you made it this far with my review, it’s worth checking this out, too.

I did see the 4k Director’s Edition of the movie in theatres on May 22nd.  It was glorious.  It’s never looked better.  Sounded amazing, looked awesome.  Same plot nits are all still there, but this is the way it should have looked 43 years ago when I first saw it in theatres.

Now the 4k Director’s Edition is out on Blu-Ray, and I had to get that.  Yeah, I watched it on Paramount+.  Yeah, I saw it in the theatres this summer.  But this was my first Star Trek theatrical experience, so I had to have this.

While the 4k DE doesn’t make it as good as Wrath of Khan or anything, it does seem to help the overall vibe.  The core problems with the movie are still here, but they seem lessened.   If you made it this far reading my post, take a shot at this version.  I rather enjoyed it.  Looks a lot better than it ever did before.

You can buy the 4k blu-ray here. 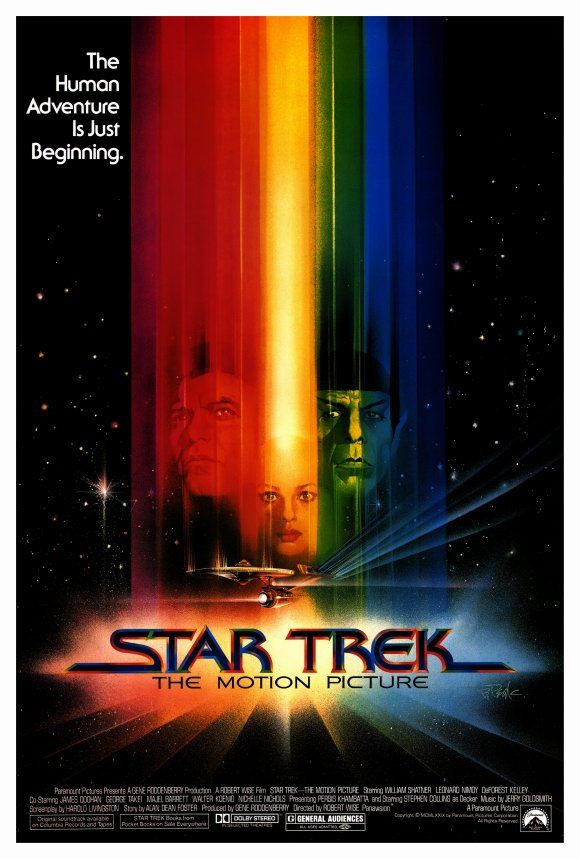