New toys for the cats

Since my wife and I got our Tonkinese cats and moved into the house last year, we’d always been talking about getting our cats a cat tree (and some other toys). We never really got around to it until now, though. This morning we attended a cat show out in Ft Worth Texas. From where we live in Garland, it’s about a 55 mile drive, so it’s not just right around the corner.

Problem is that our cats like a specific kind of toy generally known as a glitter ball (we call it a sparkly ball). Thing is, while you can get them in most places – the ones we’ve seen in stores are pretty cheap, and while we’re standing there in the store, some of the stuff comes off the ball. As our cats are fairly destructive to this toy, the ones that fall off in our hands in the store are no good. About two years ago we ran into someone at another cat show who sold a decent quality one that doesn’t fall apart immediately. So we bought a bunch. Over time, they all got trashed, so we needed more – problem was that we had no valid way of contacting the guy, so we didn’t have any for the longest time. Well, he was at this cat show today, and we picked up a bunch and got some contact info to get more. Our cats went nuts over these things. Kira, our three year old was acting like she was a 12 week old kitten again with this. And this breed for some reason likes to feed their toys, so the sparkly balls got carried over to the food bowl and dumped in there. It’s like “Here – eat, you toy!”

Anyway, we also bought a cat tree from a guy who was there selling his creations. The funny thing is we’d seen his work around town, he’s from San Antonio, and has his cat trees in a few pet stores around town. So after talking it over, we decided to pick one up, as we thought it might help our cats with moving their desire to climb on things we don’t want them on to the cat tree. The problem was that I drive a Chevy Cavalier, and a 6ft tall cat tree wouldn’t fit in there. Mentioned this kind of “thinking out loud” talking to Lynn, and the guy said he’d drop it off to us after the show, since he was headed in that general direction anyway. That was most kind of him, as was his offer to drop $25 off the price of the thing if we paid him in cash. Extra nice. The guy was very punctual, he showed up when he said he would, dropped it off, and then we introduced our cats to it.

They loved it. Kira had something like it at the cattery where she was born, but Zathras really didn’t. There was something similar, but my memory says it wasn’t like this. Kira took to this immediately, she was all over it, as was Zathras, but Kira seemed to be enjoying it the most. In fact, she went right to the scratching post on it, and loved that – because she could stretch out her body while scratching. But the funniest part was when she climbed up the pole like it was a real tree. That was quite funny to watch. Zathras wasn’t as into it in terms of climbing, but both cats were on all levels of it, and I think they love the tube that’s on the ground, too. A good purchase, something we probably should have done sooner.

The pics here are a couple of samples from a larger collection of pictures of the cat tree available here – one shows Zathras climbing up to get a sparkly ball on the cat tree, and the other is a cool action photo showing Zathras in mid flight jumping off the cat tree. :) 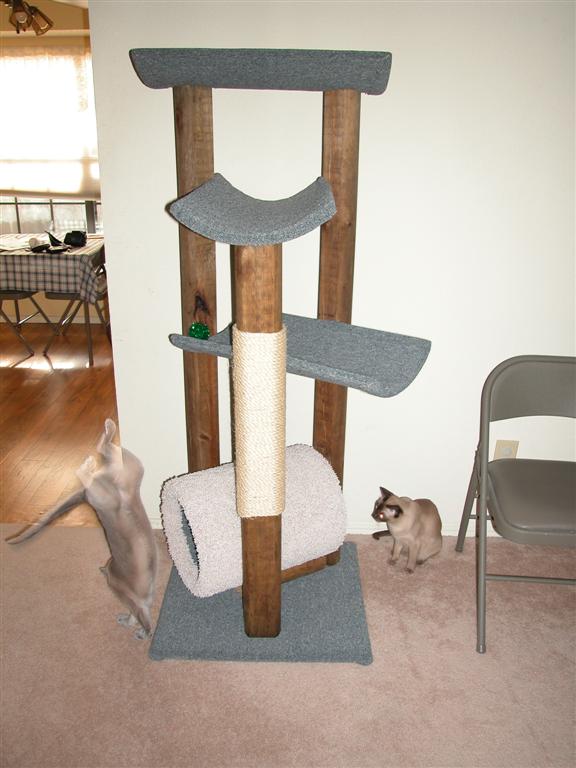