Rise of the Triad is a game I really loved working on. Well, the original one, I didn’t work on the newer Interceptor version.   ROTT was by far my personal highlight of my 20 years working in the videogame industry.   Not only was I a mapper in the game, I was a character in the game.  I played the second boss character, “Sebastian Krist”.  To that, we were all digitized for the game.  We all got dressed up, stood on a rotating board, so multiple angles could be captured, and did death scenes, all of that.   This was in 1993 mind you, so tech back then was a lit more primitive than it was today.

The reason I’m bringing all this up is I recently discovered something I had hidden away from the old days.  When my old company was sold recently, I went looking through all the stash of stuff I had from many a moon ago, and discovered several things from Rise of the Triad.  However, one that has NEVER been seen to this day was this one: 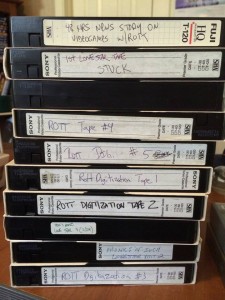 It is the collection of VHS tapes we used to digitize the characters for Rise of the Triad.  The same VHS tapes we made back in 1993.   Surprisingly most of it was still accessible.  If you look at the large version of that picture, a couple of them say “stuck”.  Those were ones that my VCR would only play to a point, and then no more.

However, I was able to get the majority of that transferred over to digital and is now on the computer.  So the physical tapes no longer need be stressed over whether they can play or not.

The reason I’m bringing all this up is I had a chat with the new owners of 3D Realms as well as Apogee Softare LLC about the contents of this, and they all agreed that I can release some clips of this, so here you go.   Given this coming December is the 20th anniversary of the release of Rise of the Triad (v1.0 shareware came out Dec 21, 1994), I thought it might be nice to do some historical stuff for the game in the run up to that.   So here’s the first of my captures from the sessions.   A few notes about the sessions:

The first one up is Steve Quarrella, who did the “low guard” in Rise of the Triad.  He was known for saying “DIE!”.  If you played ROTT, you killed him quite a bunch.  :)    The people that appear in this video are: Steve Quarrella (guard), the late great William Scarboro, Tom Hall, Steven Hornback, & Scott Miller.


There will be more videos later on once I get a list of all the people I have usable video for.   Let me know what you think of this.

UPDATE:  After seeing the positive feedback to the video release, I decided to go back and re-do “Video 1”.   When I did the first video initially, I just randomly took a chunk of a couple of minutes out of the footage without much thought as to what was in there.  I decided to go back and pick some stuff with a better intent of capturing the session.  So here’s a “second” ROTT Video Capture #1.  It is also much longer.  Check it out:


UPDATE: Video #2 in the series is out.  You can check it out here.