Those who know me know I’m a metalhead first.  Things like Black Sabbath, AC/DC, Judas Priest, Queensryche – these are my jams.  But unlike most of my metal brethren, that’s not ALL I like.  In fact, in the right frame of mind, I can like almost anything.  However one of my favorite treats I go to around Christmastime (Well, pre covid anyway) was the Brian Setzer Orchestra.  I loved seeing his Christmas show.  However, one of the joys of his show are bands he picked as openers.  They were all excellent.  The first one was saw was a band called “Firebird Trio“, and the  second was “Low Volts“.  However, the third band I saw opening for Setzer was “Lara Hope & The Ark-Tones”, and Lara’s band is the reason I’m writing today.

So in December 2018, I go to see the Setzer Christmas show again, and as usual, I was like “Who the heck are Lara Hope & the Ark-Tones”?  Then they played.  Now normally I don’t go for bands live that I don’t know their music – I prefer to know the music first.  However, that was a total non issue with these guys. I fell in love with the band from the first song they played.  They had a nine song set, and it was freakin’ amazing!  Normally when I go to a concert and I’m seeing a band I don’t know I record one random song.  Did that here, and the random song turned out to be one of my favorites – I’m including that here. (For the Monday Knights, Brrapapa is at 2:58):


As I age, I find it harder and harder to grasp onto new music – I am constantly drawn to the stuff I grew up with, and things I know – which really isn’t that uncommon with people..  There are very few new bands that I feel can fill the gap in my personal musical landscape once the bands I knew either die off, or just stop.  But Lara Hope & The Ark-Tones fill this bill with me. They’re a rockabilly band out of New York, and to some extent I figure as how Setzer found them.  I’ve loved them since the moment I first found out about them in Dec 2018, and since then I’ve gone backwards and acquired all of their material.   There are a total of three full length Ark-Tones albums, a handful of singles, and two related albums by the “Gold Hope Duo” (which is basically half of the Ark-Tones).  There’s also a full length studio album from an earlier variant of the band called “Lara Hope & The Champtones”.  All excellent stuff. 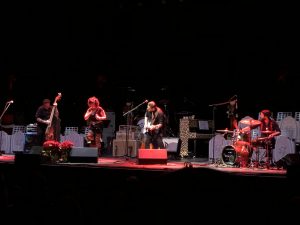 I was set to see them live a second time in the Spring of 2020, but that tour got canceled due to Covid (along with all kinds of stuff last spring).   After their tour finished, they started doing regular live streams from their house every Monday night.  I’ve seen nearly every one of them.  They’ve been so fun.  The group of us regulars that turn up to them all have been dubbed “The Monday Knights” and Lara even wrote a song about the Monday night shows called “Taking Back Monday Night“.

The band had also recorded an album in that time leading up to the tour, with the idea it would be released in the summer of 2020 – all stuff scrapped due to Covid.  So the album sat, we got a bunch of really cool live streams, and a short EP of songs from the album which was designed to be merch sold at the shows that didn’t happen.  Got me excited.  As time progressed, they finally came up with a plan to release the album – which finally happened two days ago on 25 Jun 2021.

The album is called “Here to Tell The Tale”.  It’s an 11 song, 38 minute album of totally fun rockabilly.  But it’s not just that sound.   There’s one track that’s fun on smokin’ rock – one that dances hard on the country side of things.   There’s fast, slow, and fun on this album in spades.  Something for everyone.   As a rocker, I was taken in by the first single, a track called “Let’s Go!”.  As I say on the Monday night live streams…  “THAT RIFF!”  That opening riff is one of my favorite riffs period.  It just smokes.   Here, check it out:


This is the first song on the album, and good lord does it SCREAM concert opener.  I can’t recall hearing a song so suited to being the opening track by a band taking the stage before in an exceptionally long time.  It smokes.  Hard.  That’s due to guitarist Eddie Rion (or as I call him Shreddie Ray Vaughn).  One other fun thing about “Let’s Go!” is the end of the song – that last note on the song sounds like it’s lifted from the early 60’s – specifically from the James Bond theme.  I don’t know if that’s intentional or not, but the “sound” has that same sound as the old 007 theme song had.   They are working on a conceptual music video for this song which isn’t finished yet, but should be soon.  From the sneak peaks we got, it sounds like fun.  Some of their old videos were fun too, so I can’t wait to see that.

The second single was a fun track written about Lara’s own mother called “Some Advice”.  It contains a list of things her mom has told her over the years (“Have some children”, “Pay your bills on time”, “wear your coat outside”)…   It’s definitely  the most fun track from the album, and was the second single.  Her mother is on the track too, saying a few things in the chorus.  It’s just super fun.  During a couple of the live streams, Lara’s mother sang the song – complete with wagging finger when she’s doing her bits.  It’s just so much fun – I want to see them take her on tour to do that, although it might end up with three or four sequels to “Some Advice” if they do.  That song is available on her Youtube channel as well.  Check that one out, too:


But there’s so much goodness on this album, I could write a few thousand more words about each track and the breakdown.    The last song is one called “I Drink To Your Health”, a song they’ve been doing live for some time – the first time I heard it was a live album back in 2016.  The chorus is “I Drink to Your Health so many times that I’ve already ruined my own”.  It’s a good concert ending song, and a song both my wife I love.  I get the same vibe from that that I do from Garth Brooks’ “Friends in Low Places”.  One that makes me want to get up and sing from a bar microphone.  :) 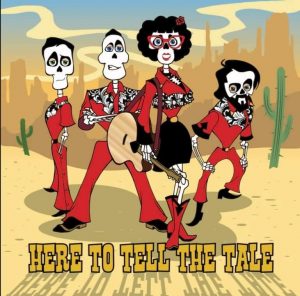 There’s no bad tracks (aka skips) on this album – solid from front to back.  I’m also fond of the track “Whoa is Me” – probably because it’s a faster song.  We’re not talking Metallica in its prime fast here, but it’s got a nice fast pace to it which I tend to enjoy over the slower stuff.  Moves nicely, and has a great riff, too.  Then there’s a song called “12 Minutes of Hot Water”.  It’s definitely a song about something I can’t recall hearing a song about before.  The subject is how much hot water you have left in the shower.   We get other tracks with nice vocal lines like “Stop, Drop, & Roll”. “It’s a Crime”, and “The Art of Asking”.   These all showcase Lara’s vocal range.  One of my favorites in this regard is “Knocked Out”.  Knocked Out has a line “When I dream of you, there’s drool on my pillow”.  The last time it’s sung in the song, Lara has a really smooth delivery, which is my favorite vocal moment of the entire album.  The final 30 seconds of “Knocked Out” are amazing as hell.  I’m not a general fan of slow stuff, but this is perfect.  The vocal delivery of “on my pillllloowwwwww” and the restrained guitar work there is awesome.  It sounds like something straight out the 50s – like it could go in that scene from Back to the Future set in the past.  It’s awesome!  As much as Lara knows I love fast stuff like “Let’s Go”, the slow parts of Knocked Out are equally amazing.  I could go on, but I’d just be saying the same things about the rest of the tracks I didn’t mention. 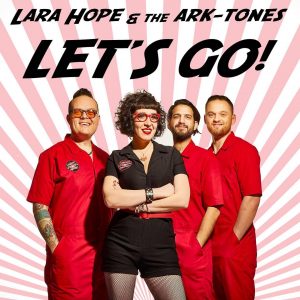 The band ran an Indiegogo program for the album which ended a week or so ago.  We backed that hard.   I cannot stress enough how great this album is.  Even if you’re not an actual rockabilly fan, I urge you to check it out.  It’s amazing.  While you can technically buy it anywhere, go buy it from them at Bandcamp directly (link below).  That way, the band makes more off the album than if you got it from some place like Walmart or Amazon.

I also probably shouldn’t end this without touching on the band as a whole.  While the Low Volts band I mentioned earlier is a one man band, most are not – there’s more than just Lara here.  These tunes wouldn’t be what they are without the talents of the whole band.

All four of them combine to form the musical landscape that is “Here to Tell the Tale”. I’m glad I’m here to hear the tale. You can be too.  The album is available on Apple Music & Spotify.  But do the band a favor, buy it.  They’ll make a fraction of a penny off of you listening to it in those places.  While legal, the band gets stiffed. Click on this image to buy your own copy.  Your ears won’t regret it.

Lara – next time you’re in Dallas – home concert for sure.  It’ll happen. 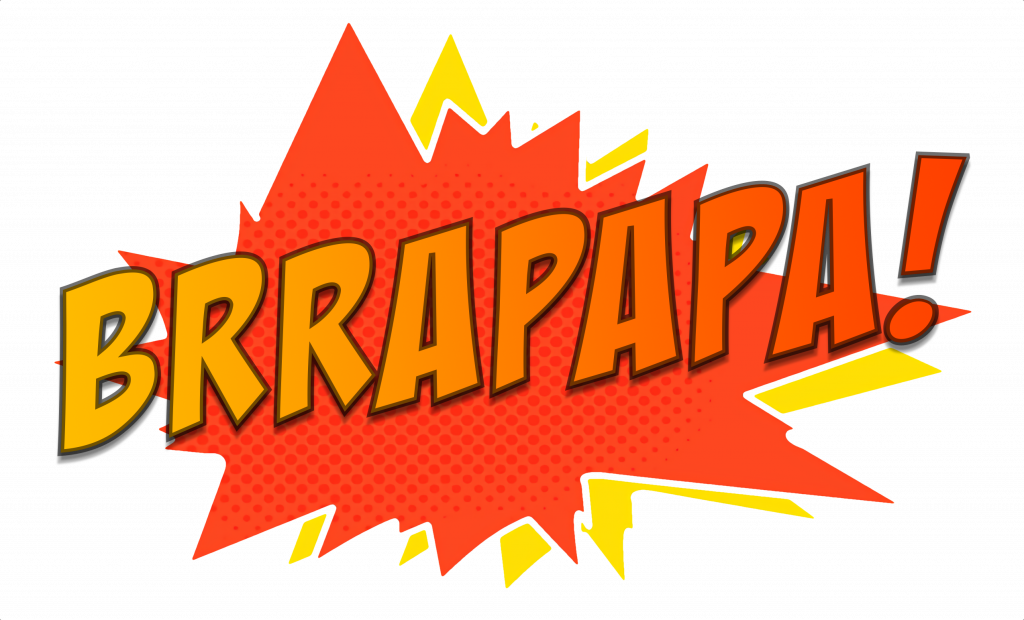